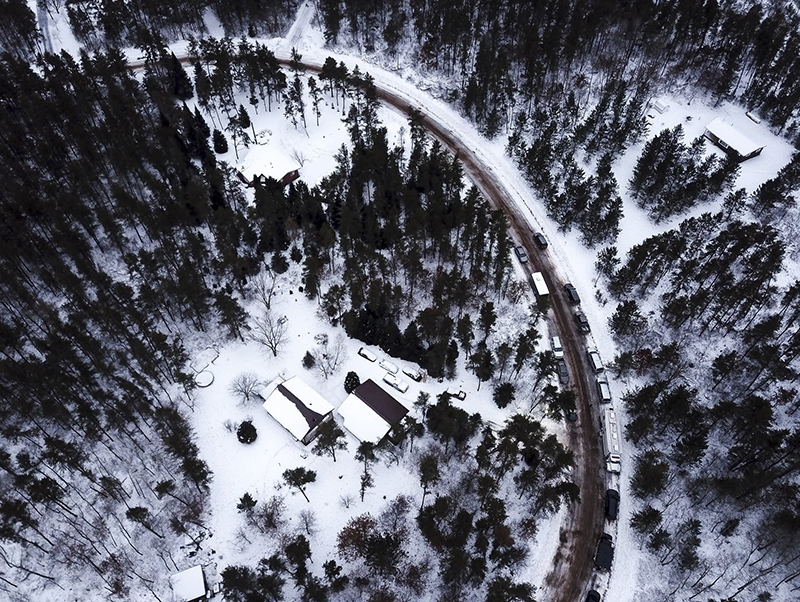 This aerial photo shows the cabin where 13-year-old Jayme Closs was allegedly held by Jake Patterson, as the site is surrounded by law enforcement vehicles Jan. 12 in the town of Gordon, Wisconsin. - Aaron Lavinsky/Minneapolis Star Tribune via AP via MPR News

Jake Patterson, the Wisconsin man accused of kidnapping Jayme Closs and killing her parents, waived his right to a preliminary hearing Wednesday morning during his second court appearance.

A judge set his arraignment for March 27, when he could enter a plea. Patterson was present in the courtroom on Wednesday, a change from his video appearance in the first hearing.

Patterson, 21, faces up to life in prison on charges that he killed James and Denise Closs and kidnapped their 13-year-old daughter Jayme and held her captive for nearly three months. He’s also charged with one count of armed robbery.

Weeks of intense searching for Jayme came to a halt last month when Jayme apparently escaped from Patterson’s home in Gordon, Wisconsin. Jayme made her way out of the woods of rural northern Wisconsin where Patterson lived and found a dog walker who helped connect her to authorities.

Barron County Sheriff Chris Fitzgerald, who helped lead the search for Jayme, called her a “hero” for managing to escape from Patterson.

Patterson wasn’t on authorities’ radar until the day he was arrested. According to the complaint, he took measures like shaving his head and putting stolen license plates on his car before going to the Closs home the night of the killings and kidnapping to avoid detection and leaving DNA evidence at the scene.

Despite not yet entering a formal plea, Patterson allegedly told police “I did it” when he was pulled over the day Jayme escaped.

That sets up a complicated legal case, and Patterson’s public defenders have been mostly mum on their strategy.

Legal analysts say Patterson’s mental health and state of mind will likely play a major role in the defense, though it’s unclear what type of plea he would enter.