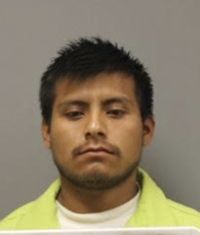 Joel Callejas Cantor, 25, was sentenced after he entered an Alford plea to second-degree criminal sexual conduct in September. In entering the plea, Cantor asserted innocence but admitted the prosecution had enough evidence to convict him of the crime.

Cantor was given credit for 203 days served and will serve his sentence at Minnesota Correctional Facility in St. Cloud.

Of the sentence, Judge Steven Schwab ordered Cantor to serve at least six years in prison and three years on supervised release.

He will be on conditional release for 10 years after he is released from prison.

In requesting the nine-year sentence, Assistant Freeborn County Attorney Abigail Lambert said Cantor had not taken responsibility for the incident and had minimal remorse for the victim.

Clinefelter added Cantor’s denial did not mean he was not amenable to sex offender treatment.

Court documents state Cantor was charged after officers responded to a 911 call July 20 from a woman regarding the alleged sexual assault of her 7-year-old daughter.

She said she came home from work and found the girl with Cantor.