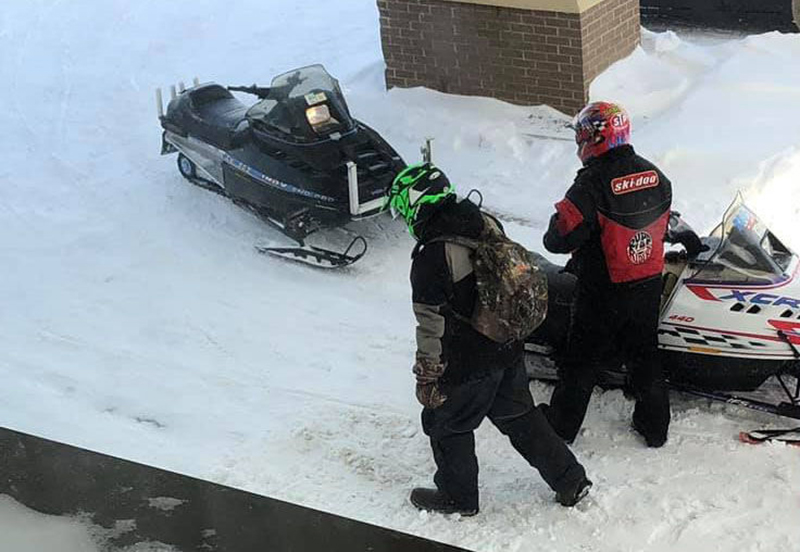 TruStile supply chain analyst Tyler Bachtle, 25, of Northwood, was one of the snowmobilers checking as many stuck vehicles as possible.

“I caught wind that the Worth County sheriff was looking for people to go out on snowmobile and I called Deputy Kevin Knudson and asked if they had enough help,” Bachtle said. “He asked me to meet at the sheriff’s office to put together a plan with the group and head out.”

Brian Lund, Russ Meyer, Kenny Stambaugh and Bachtle headed out as a group with backpacks of extra gear to transport people to North Iowa Welcome Center.

A father and son group, Rusty and Cody Wahl, went out on Highway 65 South of Northwood.

“We figured people had a winter coat and maybe gloves but likely not snow pants or a helmet required for snowmobile ride in that wind,” Bachtle said. “Frostbite wouldn’t take very long if you’re not dressed properly and we wouldn’t want to make their situation worse.”

The group was given a list of cars and their locations of people who called 911 or the sheriff’s office. They left at about 11:30 a.m. Saturday and stayed out for about four to five hours.

The group traveled on Highway 105 West out of Northwood, up Interstate 35 to the Minnesota border and down to the 410th Street overpass. They picked up a man on Wheelerwood Road.

They brought all three back to Diamond Jo Casino.

“These people had been there since 8 p.m. Saturday night and were either out of gas or very close to it and excited to see us,” Bachtle said.

“This storm was like nothing I’ve ever seen,” Bachtle said. “Drifts 6 feet tall across parts of the interstate and visibility so poor at times we could only drive 20 mph.”

Lund, 30, of Northwood had never experienced a blizzard like that either. Lund is a reserve captain for Worth County Sheriff’s Office.

“You couldn’t hardly see where you were going on the snowmobile,” Lund said, even as slow as 5 to 10 mph. “It’s scary because you have no idea what you’re going to run into.”

Lund said his group checked at least 25 abandoned cars, bringing to mind an apocalyptic like scene.

“When they say ‘travel not advised,’ I know sometimes they don’t get it right but don’t make it worse by going out there,” Lund said.

The snowmobilers were photographed at the casino by Cindy Keough and asked her granddaughter, Rindy Johnson, to post the photo on Facebook.

Keough and her husband, Bill, were on the road from Oregon to Michigan when they stopped at Diamond Jo Casino and stayed for the night.

“My grandma said it has been complete chaos with cars in the ditch everywhere, sold out rooms and 60-plus stranded travelers setting up camp in the lobby of the hotel,” Johnson said in a Facebook post.

Cindy saw the group of snowmobilers bring back stranded drivers to the casino.

“It warmed my grandma’s heart so much and she is hoping these men can get a little recognition,” Johnson said.

Johnson told the Globe Gazette Monday that Cindy is “still really upset she couldn’t buy them lunch and beer.”