The silver lining of a debilitating injury 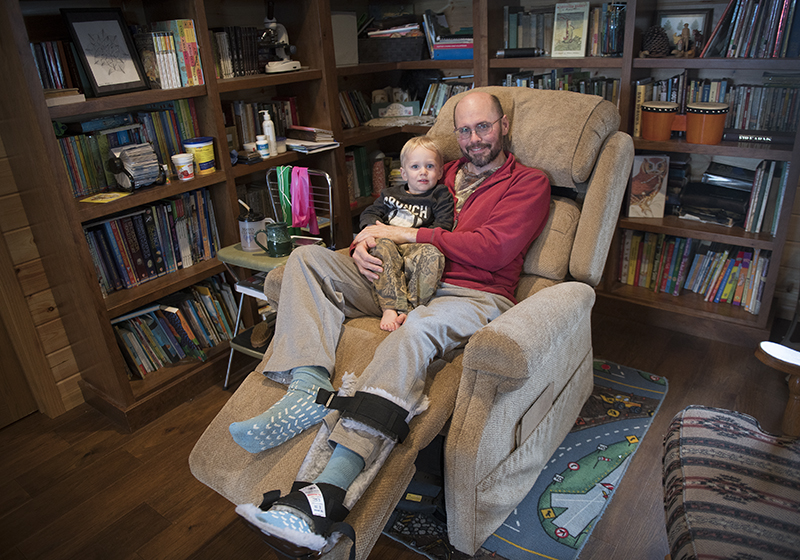 John Tenneson was badly injured last month when his truck crushed him up against his house. The left side of his pelvis and hip socket were crushed, his knee and ACL torn, his fibula fractured, and muscle, ligament and tendon spots in the area of his calf muscle damaged. - Colleen Harrison/Albert Lea Tribune

Man recovering after car crushes him against house

CLARKS GROVE — On Jan. 14, John Tenneson’s left leg was severely injured after being crushed between his truck and house.

The injuries Tenneson suffered were numerous: The left side of his pelvis and hip socket were crushed, his knee and ACL torn, his fibula fractured, and muscle, ligament and tendon spots in the area of his calf muscle damaged.

Over the next 1 1/2 weeks, he underwent three major surgeries at Mayo Clinic in Rochester — one nearly causing him to bleed to death — and numerous procedures.

Today, Tenneson is working toward a full recovery at his home with the help of his family and community.

Tenneson recalled traveling to his house Jan. 14 from Clarks Grove-based Omni Automotive for lunch. After temporarily sitting in the truck in the driveway to answer messages, he walked toward his house, leaving the engine running because he thought the vehicle was in park.

He saw his sons ice skating on a nearby pond and the next thing he remembered was hearing a crunching sound.

“My whole vision was filled with the hood, the grill and the bumper of the truck,” Tenneson said. “It was right there on me. And it just came down on me.”

He recalled how he reacted after the crash.

“I just cried out to God, and I just said, ‘Lord, God,’ and I pushed as hard as I could on the truck,” Tenneson said. “And I have a friend, and we talked about it. He knows vehicles, and I still don’t think how, under normal conditions, how I could have pushed that truck backwards.”

After pushing the truck away, he said it moved forward again and crushed his leg.

His son, Reuben, 10,  reportedly crawled over the hood of the truck and put the vehicle in reverse.

“I can’t believe I stayed conscience,” Tenneson said. “It was so painful.”

Tenneson’s wife, Jamie Tenneson, comforted her husband, and first responders arrived. One of the first responders, a Freeborn County Sheriff’s Office employee, was a friend of John Tenneson.

“It was rough,” John Tenneson said. “It was brutal.”

A helicopter was unable to be flown in because of foggy and misty conditions. Tenneson was taken by ambulance to Mayo Clinic Health System in Albert Lea, where initial scans and X-rays took place.

He was then taken to Mayo Clinic in Rochester and underwent intensive surgery the day after the crash to repair the front of his pelvis.

During a Jan. 17 surgery on the back side of the injury area, he nearly bled out and was transferred to another department to stop the bleeding.

On Jan. 21, doctors performed the third and final surgery on the back of the injury area.

Jamie Tenneson said she was surprised when she learned her husband would return home after only 1 1/2 weeks in the hospital.

“My wife was a little bit nervous about that,” John Tenneson said. “We had, like, nothing ready at home. We didn’t expect it that quickly.” 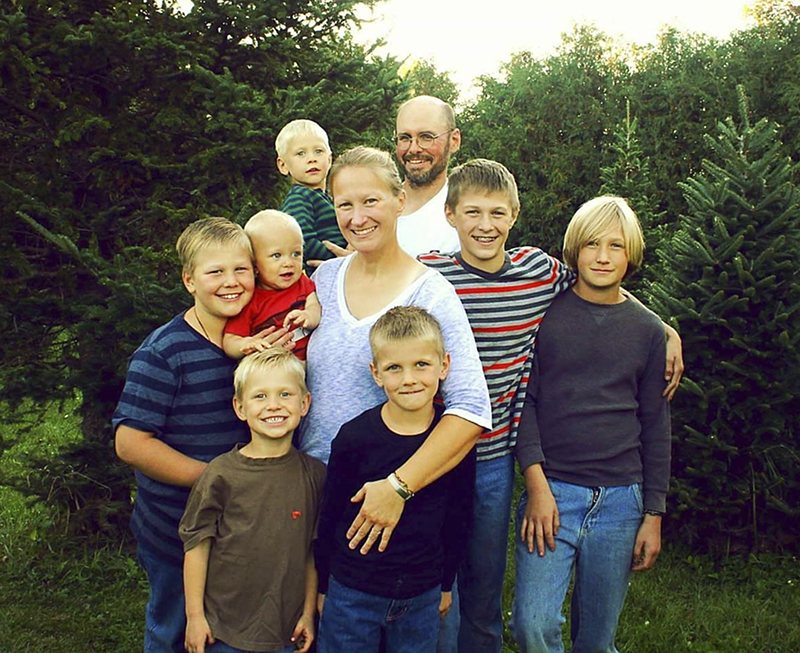 A GoFundMe page for the Tenneson family set up one week after the crash had raised $7,150 as of Thursday morning. – Provided

A medical bed and toilet seat riser for their home were donated by the Lions Club in Ellendale.

The mother of a friend purchased a chair from Morris Furniture, allowing John Tenneson to not have to remain in his bed.

A GoFundMe page for the Tenneson family set up one week after the crash had raised $7,150 as of Thursday morning, including $2,000 from one person who was a stranger to the Tennesons.

“Every time I go to the grocery store, someone will come up and slip a $100 bill in my hand,” Jamie Tenneson said.

The family has received an abundance of food from fellow Crossroads Church members and the Mothers of Preschoolers organization.

“I think I’ve made two meals in the last month and a half,” Jamie Tenneson said.

“Sometimes it wasn’t even the money, it was the thought,” he said.

He credited Farmers State Bank and Produce State Bank for delaying payments following the crash as his income evaporated.

He estimated more than 10,000 people are praying for him.

Tenneson has a wall full of cards above his bed, and money has sometimes shown up at his door. He said former customers have arrived with food and money wanting to visit and wish him well.

Tenneson recalled weeping in his hospital room because of exemplary treatment by hospital staff.

“It’s been humbling for me,” he said. “It’s really hard for me, it’s really hard to take things. … Also, you feel like, ‘OK, wow, you didn’t realize how much you meant to people.’”

Today, Tenneson, the owner of three businesses — Clarks Grove Golf Course, The Evergreens tree farm and Omni Automotive — is mainly relegated to his bed and chair.

“When I stand in my walker and I stand up straight, I get nerve pains and muscle tings all over in my body just trying to straighten out my body,” he said. “It’s really hard for me to lay in our regular bed flat. It really pulls on everything just to be flat.”

Tenneson cannot put any weight on his leg for three months as the injuries heal.

“Once that heals, then they can do the surgeries on my knee,” he said.

Six weeks of recovery is expected following the surgery.

Then after the knee surgery, physical therapy will be needed before he  can regain full use of his leg.

He said the crash came as he was looking for ways to slow his life down, noting he believes the crash was God’s way of trying to get him to do so.

He expects to never operate the Omni Automotive building again.

“I’ve been praying for years, just how to slow it all down,” he said. “Because with the shop, trying to run it myself, I was always so busy. I was really not enjoying my job at Omni anymore. It just got to be too much. I just wanted to slow down. I wanted to spend more time with the family and focus on the tree farm.

“If this was what God needed to do in my life to bring me to the point where I needed to be and he wanted me to be, then I am OK with that.”

The Tennesons are expecting an eighth child in July. John Tenneson hopes to at least be walking by then.

He noted he prayed and desired to be with his homeschooled children, and he now entertains and keeps the younger boys busy while his wife works with their older sons.

Jamie Tenneson said her husband’s positive attitude makes the family feel like the situation will turn out fine.

John Tenneson said he is embracing the change forced on the family by his injuries. 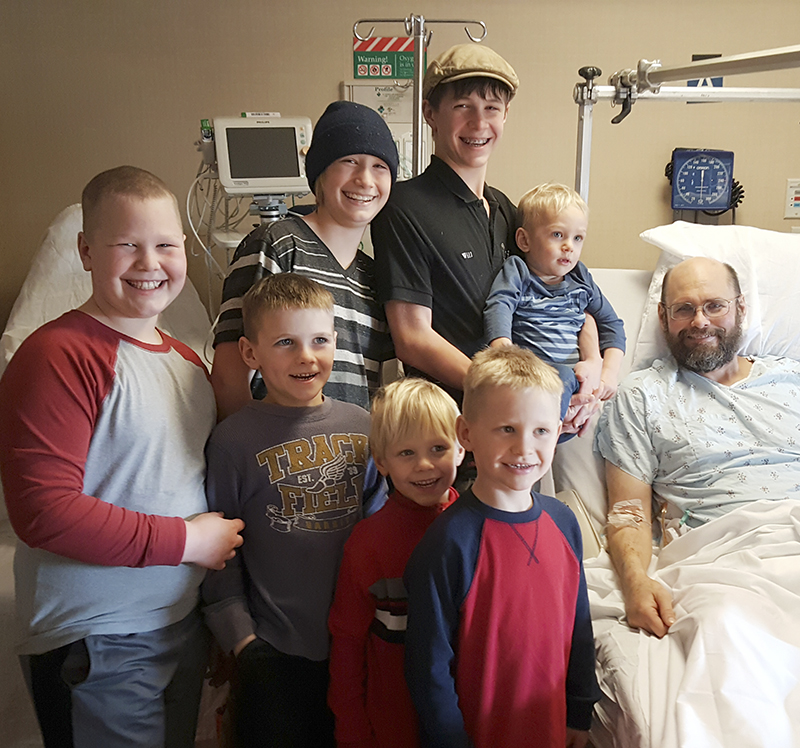 Jamie Tenneson said she was surprised when she learned her husband, John, would return home after only 1 1/2 weeks in the hospital. – Provided