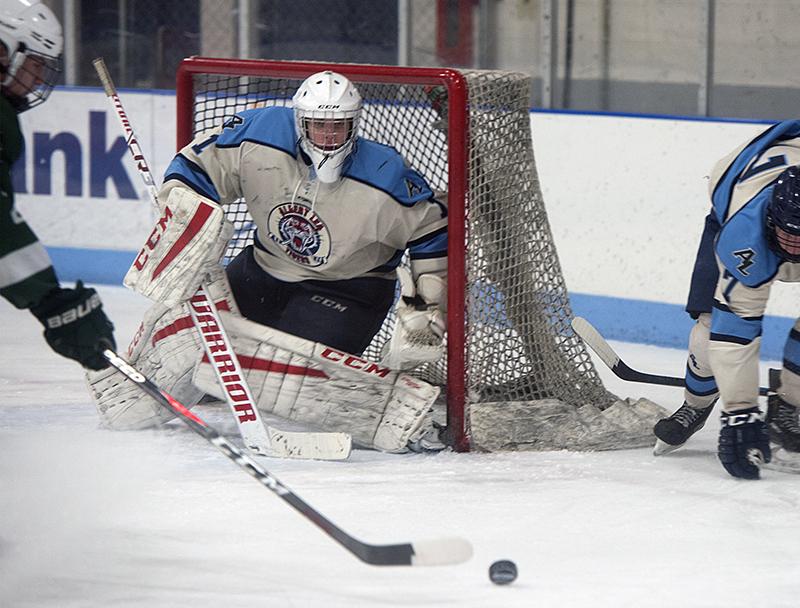 The Albert Lea boys’ hockey team started its run to claim the Section 1A tournament title when it hosted Faribault Thursday night in a second-round matchup.

After entering the third period in a 1-1 tie, the Tigers came out with a flurry of goals midway through the third to beat the Falcons 4-1 and advance to the section semifinals.

It took a while for each team to find its footing in the first period, with a combined total of just 14 shots in the first. Senior captain Cole Wentzel was called for a minor penalty with just under eight minutes to go, however, the Tigers defense held strong and kept the Falcons out of the net.

With 3:30 left in the period, junior Culley Larson broke the stalemate to give Albert Lea a 1-0 lead heading into the first break. The goal was unassisted. Albert Lea amassed six shots on goal in the period, compared to Faribault’s eight.

Senior Jaxon Heilman was in the goal for the Tigers, saving all eight shots.

Both teams came out in the second period and wasted no time in upping their shots on goal count. The Falcons capitalized on one of those shots around six minutes in to the period to tie the game at 1-1. 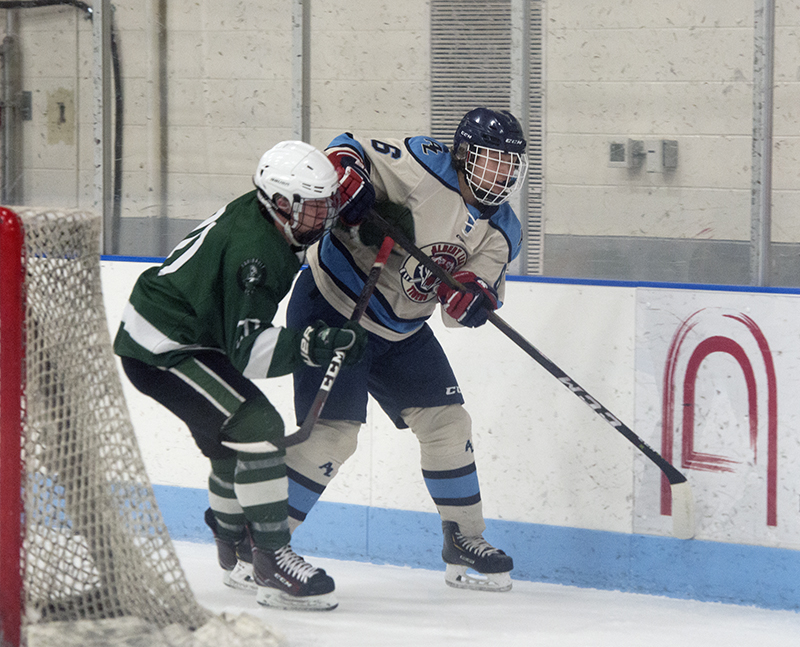 Albert Lea sophomore Caden Severtson battles with a Faribault foe in Thursday night’s Section 1A quarterfinal matchup. With the 4-1 win the Tigers move on to faceoff against the Bulldogs of Minnesota River. – Tyler Julson/Albert Lea Tribune

Owen Zelenak was assessed a major five-minute penalty with just over seven minutes remaining in the period, but once again, the Tigers held strong on the Falcons power play and held the score at 1-1 to the end of the period.

Albert Lea added another 18 shots on goal during the period, while Faribault added 12. Heilman was 11/12 on saves in the period.

Tied 1-1 with nine minutes left to go in the game, sophomore Blake Ulve broke the tie with a goal assisted by Larson and Caden Severtson. Just 19 seconds later, the Tigers added to their lead with another goal, this time off the stick of senior Carson Goodell, assisted by Wentzel.

To all but sure up the game, Goodell scored another goal not even three minutes later to give Albert Lea a 4-1 lead with six minutes remaining. Larson and Wentzel assisted on the goal.

Faribault was assessed a minor penalty with around two minutes left in the game, which allowed Albert Lea to run out the rest of the clock and secure the section win.

Albert Lea had a total of 36 shots on goal in the game with four of them finding their mark. Heilman finished the game saving 28 of 29 shots.

The Tigers climb to 16-9-1 on the season and will play in the section semifinals at 8 p.m. Saturday at Rochester Recreation Center. They will face the 17-4 Bulldogs of Minnesota River; the Tigers lost the matchup 4-0 in their only meeting this season.