A Wells woman who was reportedly driving drunk in a crash that injured herself and another woman Sunday was charged with a felony Monday in Faribault County District Court. 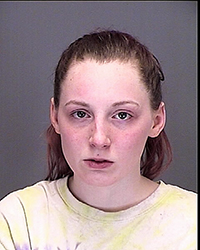 Court documents state Wallin was charged after a Wells police officer responded at about 2 a.m. Sunday to the area of Half Moon Park on a report that a silver Pontiac slid into a tree. The vehicle reportedly traveled on Southwest Seventh Avenue, left the road at the intersection of Southwest First Street and Sixth Avenue, striking and damaging the tree.

The officer reportedly saw the vehicle matching the description outside a Wells home.

According to court documents, Wallin, who was inside the home, changed her story several times, “appeared confused, lethargic and couldn’t speak well,” and admitted to consuming “several alcoholic beverages” at the Wells VFW with Esmerelda Espinosa, the passenger in the vehicle.

Wallin and Espinosa reportedly said they lost consciousness after the crash. Espinosa was described as having trouble breathing, not being able to hear out of one ear, being sore and having a cut on her nose. She was taken to Mayo Clinic Health System in Albert Lea.