50 years after the moon landing 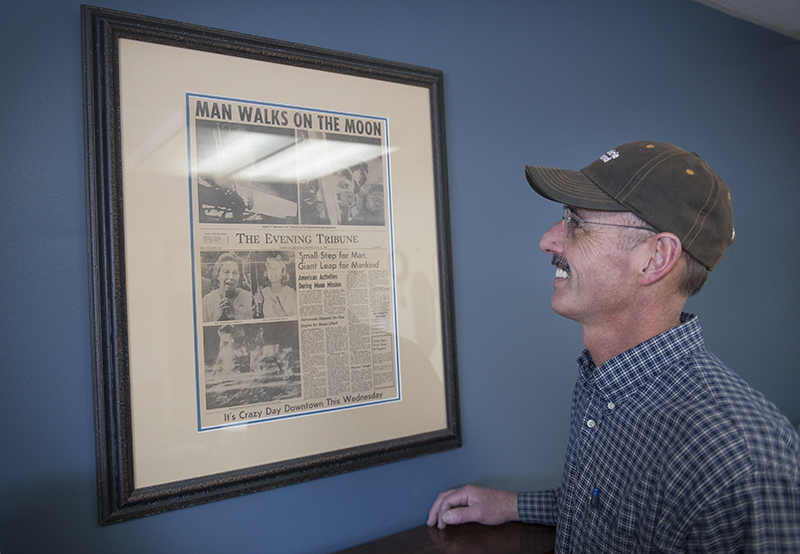 On May 25, 1961, then-President John F. Kennedy addressed Congress with the challenge of the U.S. being the first country to land someone on the moon.

“I believe that this nation should commit itself to achieving the goal, before this decade is out, of landing a man on the moon and returning him safely to the Earth,” Kennedy reportedly said. “No single space project in this period will be more impressive to mankind, or more important for the long-range exploration of space; and none will be so difficult or expensive to accomplish.”

It would take eight years — and Kennedy would not be alive to witness it — but on July 20, 1969, the Apollo 11 mission reached the moon, and in the early morning hours (Coordinated Universal Time) of July 21, 1969, astronauts Neil Armstrong and Edwin “Buzz” Aldrin walked on the moon’s surface.

About 2 1/2 hours after landing, Aldrin radioed to Earth: “This is the LM (lunar module) pilot. I’d like to take this opportunity to ask every person listening in, whoever and wherever they may be, to pause for a moment and contemplate the events of the past few hours and to give thanks in his or her own way.”

‘You gotta see this’

Back in Minnesota, it was a little after 3 p.m. when Apollo 11’s lunar module named Eagle would land on the moon, with Armstrong and Aldrin walking on to the surface about six hours later while Michael Collins stayed in the Challenger command module the Eagle had launched from once reaching lunar orbit.

Alden resident Brian Bias was 8 years old at the time, and remembers his father waking him up excitedly to watch the broadcast on TV, saying “You gotta see this” over and over.

“This is history,” Bias said his father told him at the time. “They’re going to talk about this forever.”

Bias, now 58, said while he didn’t completely realize the magnitude of what was happening then, as an adult he’s grateful for his dad making sure he didn’t miss out on witnessing the historic moment.

“Being woke up to see it, I’m glad my dad did that,” he said. “As a kid you don’t really realize what it’s all about.”

While it was an incredibly grainy picture Bias watched with his father, he heard Armstrong’s famous words.

“That’s one small step for (a) man, one giant leap for mankind,” Armstrong said, words that would transmit back to Earth and be broadcast throughout the world, and would go down in history.

Bias said the moon landing was a much-needed reprieve from heavy news at a time when Vietnam War coverage was continuous and the nation had mourned the untimely deaths of both Martin Luther King Jr. and Robert F. Kennedy in 1968, and the death of John F. Kennedy five years earlier.

“NASA, the space program was a bright spot in that time,” he said. “It was like cheering for your favorite sports team, but bigger.”

He remembers watching Walter Cronkite on “CBS Evening News” with his parents. The program tracked the astronauts’ journey to the moon, which took almost four days, by showing the mission’s progress on a graphic.

Bias remembers a lot of the aftermath of the moon landing, from the astronauts’ splashdown return on July 24, 1969, to the coverage of the quarantine astronauts went through upon their return.

“We don’t know what this could be,” Bias said of the mentality following the astronauts’ return. Space exploration was such a new frontier that it was unknown if astronauts would come back with radiation poisoning or other such complications at that time.

Bias also remembers the surrounding entertainment aspects of the moon landing. Charles Schulz’s “Peanuts” comic strip had a moon landing-themed storyline for Snoopy, and tubes of food fashioned after what the astronauts ate while in space and the powdered Tang drink mix were novelty items in the grocery stores. Textbooks had Armstrong’s picture on the front when Bias went back to school about two months later.

The moon landing is an event that has stayed with Bias, and is something he has talked about with his parents over the years and with his own children as well. His family went on trips to Cape Canaveral and Houston to visit space centers. He said it’s hard to put into words for his children, though.

“To my kids, the space program is kind of ho-hum,” he said.

“They (the astronauts) were the first original rock stars. … You look back and think, ‘My gosh, they were crazy to do what they did.’” 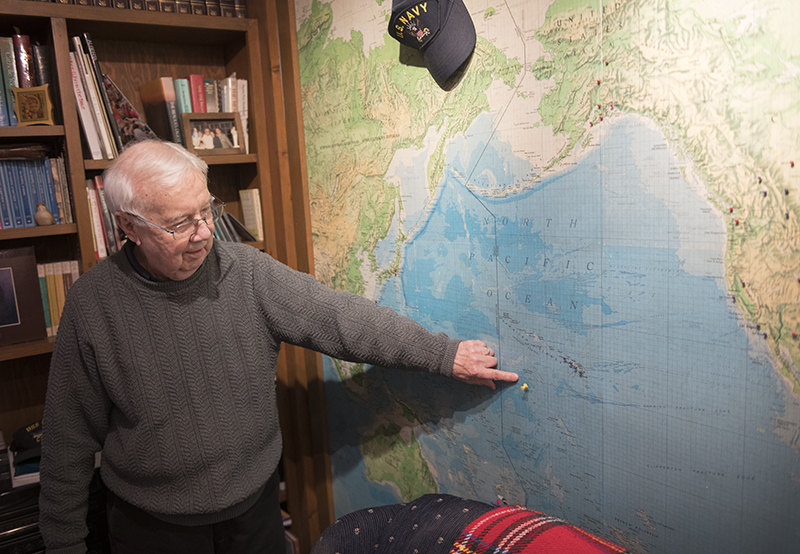 John McGaughey points out the area where the Apollo 11 astronauts splashed down on their return to Earth on a wall map in his Albert Lea home. The astronauts then boarded USS Hornet, a ship McGaughey served on during his time in the U.S. Navy. – Colleen Harrison/Albert Lea Tribune

McGaughey served in the U.S. Navy from 1951 to 1955, during which time he spent two years on USS Hornet, a World War II aircraft carrier.

When McGaughey, then about 38 years old, was watching coverage of the astronauts splashing down into the Pacific Ocean, he saw something familiar as Aldrin, Armstrong and Collins were flown to their recovery ship.

“It was the aircraft carrier USS Hornet,” he said. “This historic ship had been my home for two years. It almost felt like homecoming.”

The astronauts were on a helicopter that lowered by elevator onto the USS Hornet’s hangar deck — a deck McGaughey had walked on many times during his two years aboard the ship. The astronauts were then placed in a mobile quarantine facility, with a sign placed on it reading “Hornet plus three.” They would be met there by then-President Richard Nixon, then-Secretary of State Henry Kissinger and other dignitaries.

About four months later, USS Hornet would pick up the Apollo 12 astronauts — who were quarantined with a sign reading “Three more like before” — before the ship was decommissioned shortly after.

McGaughey would revisit USS Hornet decades later, though, and its Apollo 11 ties. McGaughey and his son traveled to Alameda, California, in October 1998 for a recommissioning ceremony as USS Hornet was being turned into a museum. The keynote speaker was none other than Aldrin himself.

His personal tie to USS Hornet and its history is something that has stuck with McGaughey, leading him to produce a DVD detailing its history, called “Eight Ships Named Hornet.” 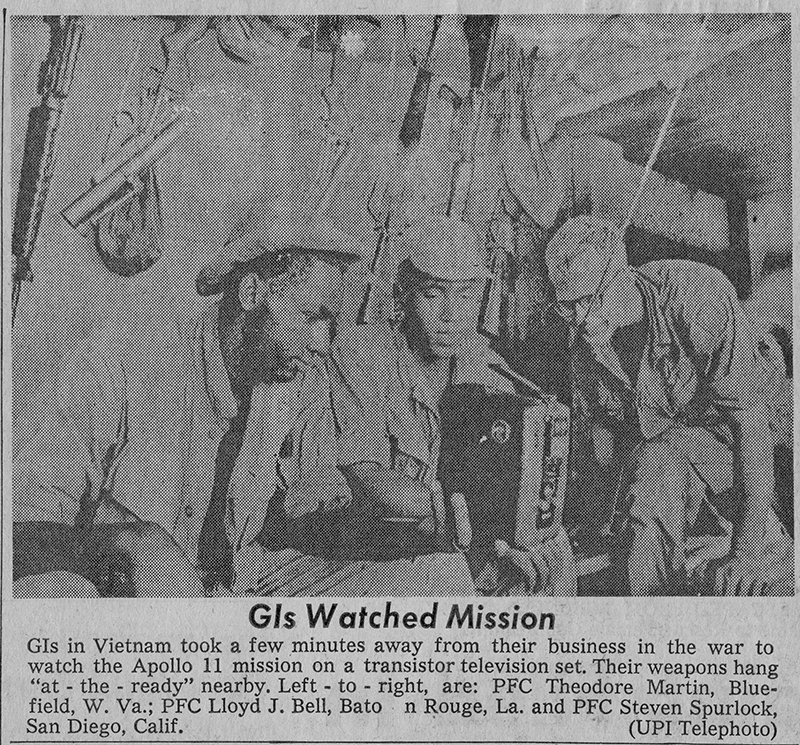 Albert Lean Paul Hanson, 74, had a more detached experience with the moon landing.

Twenty-five years old at the time, Hanson was serving in the Vietnam War when Apollo 11 landed on the moon. He vividly remembers flying an Army helicopter on a combat assault, when it came across the radio: “We (the U.S.) just landed on the moon.”

Hanson said he had all of a few seconds to register the news, as he was in the middle of a dangerous assault with his fellow soldiers. They had known a mission to the moon was in the works, but had very little connection to U.S. news at the time, so they hadn’t been privy to the buildup or progress of the mission.

“I’m here flying this helicopter in the war, and they just landed a man on the moon. What am I doing here,” Hanson said he remembers asking himself. “If they put this much effort into ending the war, maybe I wouldn’t be here.”

Hanson said he is not anti-war and doesn’t regret his service, but said it was hard to feel connected to the event when he was so far from home and in the middle of the jungle.

There aren’t many memories of people talking about the moon landing back at his Army base, Hanson said. He was overseas from January 1969 to January 1970, so he missed just about all of the Apollo 11 news coverage back home.

Then-President Richard Nixon is shown after speaking with Apollo 11 astronauts in a photograph that ran in the July 21, 1969, Evening Tribune. – Copy courtesy Freeborn County Historical Museum

David Andersland now lives in Hawaii, but grew up in Emmons and was 15 at the time of the Apollo 11 landing. He said his family’s TV set wasn’t working at the time, so his dad took him over to neighbor George Johnson’s home to watch the moon landing broadcast.

“I had to see it,” Andersland said. “I am retired from the U.S. Navy and have traveled to many places in the world. It (the moon landing) is one of the most amazing things I have ever witnessed.”

He said the technology used had to be “unbelievable” to accomplish the historic feat.

“It was just amazing,” Andersland said. “It’s just something you had to see.”

The Apollo 11 moon landing will reach its 50th anniversary this July. While Kennedy and Armstrong are not alive to witness it, their accomplishment — along with Aldrin’s and Collins’ — lives on.

As Kennedy said at the end of his challenge to Congress in 1961: “In a very real sense, it will not be one man going to the moon — if we make this judgment affirmatively, it will be an entire nation. For all of us must work to put him there.” 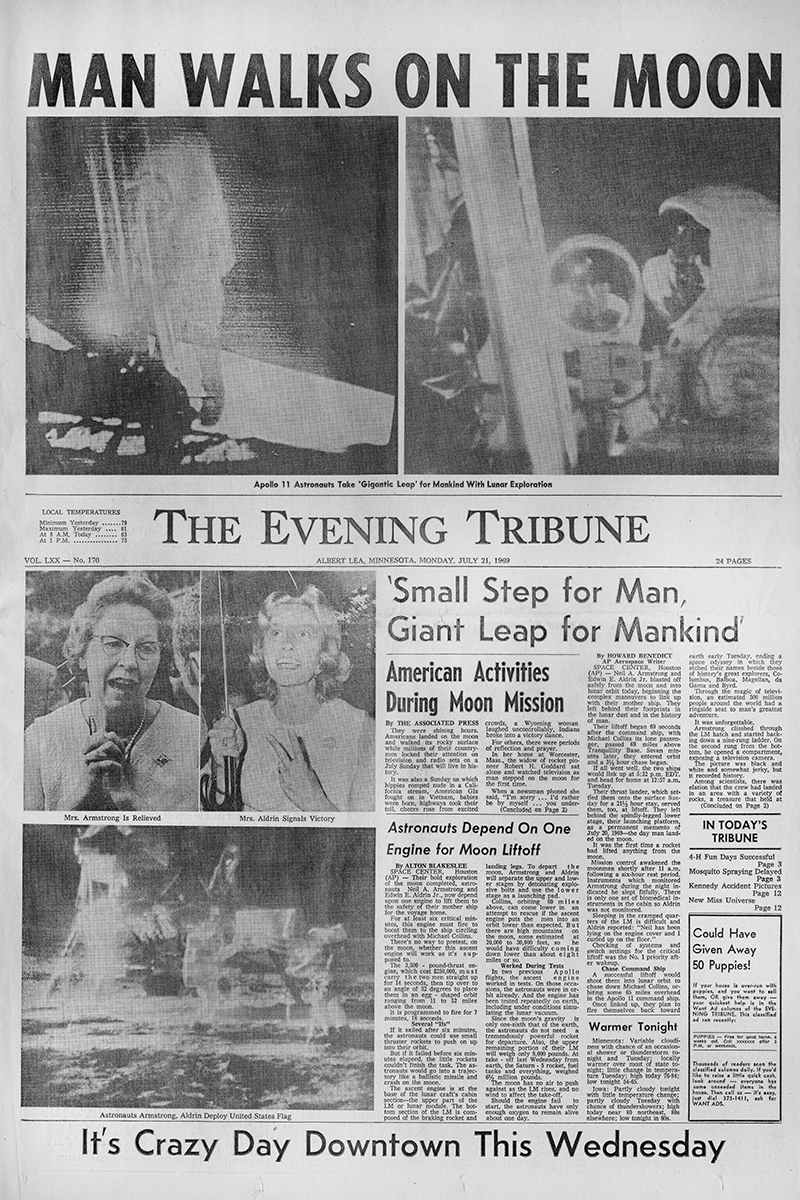