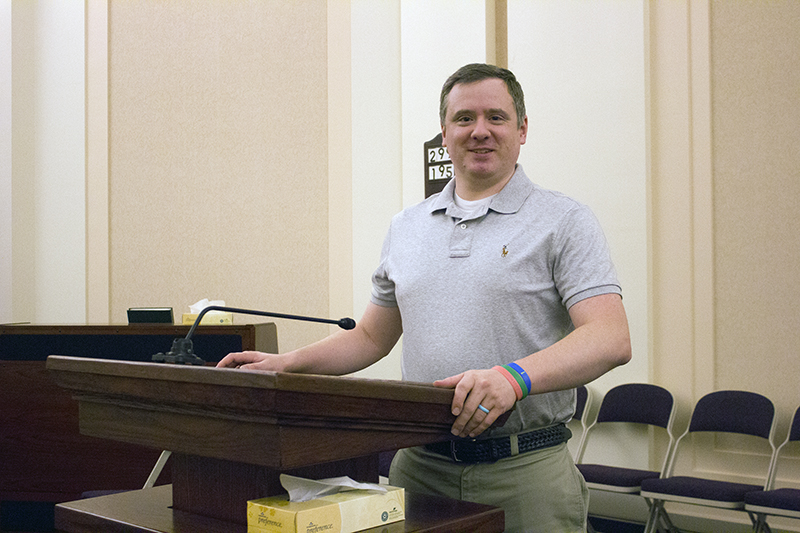 Albert Lea Jesus Christ of Latter-Day Saints Branch President Brian Jeppson leads the congregation and is a full-time U.S. Department of Agriculture meat inspector. He believes his most important role, however, is as caregiver to his family, including his wife, April, and three children, Hans, Emmalynn and Genevieve. — Sam Wilmes/Albert Lea Tribune

Albert Lea resident Brian Jeppson spends 40 hours a week as a U.S. Department of Agriculture meat inspector in Geneva, a position he said allows him to provide for his family.

In addition, Jeppson serves as branch president of the Albert Lea area of The Church of Jesus Christ of Latter-Day Saints, a position he said allows him to fill the spiritual needs of his family and 50 to 60 congregants.

Jeppson, who moved to Albert Lea in 2011 with his wife, April, then 2-year-old son, Hans, and newborn daughter, Emmalynn, grew up in Moorhead and graduated from Minnesota State University-Moorhead.

He served a mission through the church from 1998 to 1999 in Leipzig, Germany.

“The main purpose was to bring as many as we could unto Christ,” Jeppson said.

Brian and April Jeppson married in the church’s Nauvoo, Illinois, temple and lived in Iowa City, Iowa, until he received a promotion through the Department of Agriculture and moved to Albert Lea. The young family stayed in a hotel room for about one month when they first relocated. 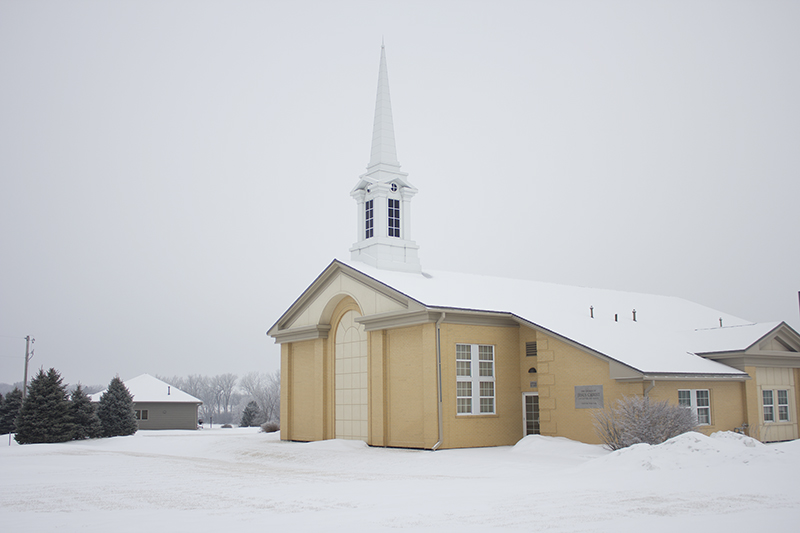 The Albert Lea branch of The Church of Jesus Christ of Latter-Day Saints is at 1721 Bay Oaks Drive on the east side of Minnesota Highway 13 in northwest Albert Lea. — Sam Wilmes/Albert Lea Tribune

As branch president for nearly four years as of early February, Jeppson sees to the temporal and spiritual needs of his congregation, some coming from as far away as Minnesota Lake.

“I do a lot of administrative work such as in terms of budgets, and I call people to positions,” he said. “I hear confessions. I’ve done marriages, funerals — pretty much the whole works.”

Through The Church of Jesus Christ of Latter-day Saints, callings such as Jeppson’s position as president of the local congregation are given through inspiration of church leaders. There is no paid ministry at any level of the church, and the work of the church is carried out through volunteer service by the members.

Jeppson said some Sundays are filled with church activities, including Feb. 3, when he said he only saw his wife for one hour because of his work through the church. He typically prays about which congregants to visit and enjoys helping widows and those struggling with faith and doubt.

“I’ve got a great wife, though,” he sad. “She supports and she understands the importance of the work.”

To Jeppson, he hopes to make congregants feel more in touch with God.

“I would like them to say that when I visit them, that they can really feel the Spirit, that I can help invite that Spirit into their homes and their lives and to be able to, most importantly, help them recognize that’s the Spirit,” he said.

Despite having a busy schedule, Jeppson believes his family is his most important calling.

“That’s who I am,” he said. “Those are the most important things to me, is my wife and my children. I’m completely devoted to them and love them.”

Jeppson admitted he has experienced a mix of emotions as branch president.

“I have never lost so much sleep and wept so bitterly since I’ve been the branch president here,” he said. “But on the flipside, I’ve never felt so much joy. I’ve never had so much great experiences, watched miracles happen. There is a burden to it, but the Lord has said, ‘My burden is light and my yoke is easy.’ And I feel that. I know that there’s a responsibility to the work, but when it comes down to it, He does most of it. I just get on my knees and pray and get up and get out the door and work.”