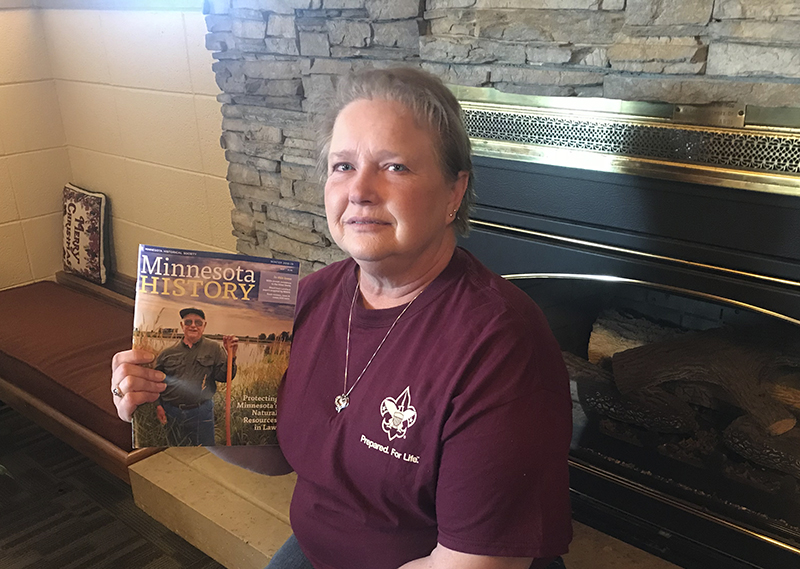 Ann Bryson of rural Alden holds up the Winter 2018-19 edition of Minnesota History, which features her father, Bill Bryson, on the cover. Bill Bryson and his wife, Arlene, were the first to file a case under the Minnesota Environmental Protection Act in order to protect wetlands on their property, that Freeborn County wanted to turn into a county road. The case went before the Minnesota Supreme Court, with the Brysons ultimately being victorious. Their environmentalism and volunteerism had a lasting affect on Ann Bryson. - Kelly Wassenberg/Albert Lea Tribune

ALDEN — A simple act of kindness can create an endless ripple. Sometimes they can change someone’s day, or even sculpt the person they become — so is the case with Ann Bryson of rural Alden.

There aren’t many places you can go in her hometown that do not bear witness to her contributions to the community. Through her volunteering — especially with the Boy Scouts organization — she has worked on many projects in Alden, including building a pergola and ramp to make the community museum accessible to all, painting picnic tables, benches and hand railings and creating a tree nursery in North Park.

Inside the walls of the Alden-Conger school, Bryson works as a substitute teacher and volunteers for the drama department, recording performances and manning their food stand at the Freeborn County Fair.

Her dedication to the Boy Scouts organization and local school district has outlasted her children’s time with them. All three of them: Bryse Olson, 23, Maurene Olson, 21, and Donovan Olson, 19, have graduated and both her sons have reached the distinction of becoming Eagle Scouts. Yet, she continues.

“Well I’m going to get teary,” she said when asked. “I grew up with a family that volunteered.”

Holding up a picture of her late father, Bill Bryson, on the cover of Minnesota History Winter of 2018-19, she continued.

“Mom and Dad volunteered for lots of things and I always went with,” she said. “I met fabulous people. I got to go all over the place, but it’s always been about the people — getting people together and bringing people happiness.”

And they taught her a valuable lesson.

“People can sit around and gripe or they can get out there and do something to make things better,” Bryson said. “And I would much rather be happy and helping than be home grumbling.”

She tries her best to not only live by the happy and helpful example they modeled for her, but to strive to spread the positivity.

When a student came to her wanting to start an anti-bullying campaign, she wanted to help, but made a suggestion to the youth.

She does the same thing when she serves as a substitute.

“For me as a sub, they don’t care what you know until they know you care,” she said. “So I think it’s really important to get down and talk to them about what’s fun, what’s coming up.”

When students’ regular teacher returns, the teacher won’t come back to a note reporting on what went wrong in their absence.

With all the negative people are bombarded with on a daily basis, Bryson feels it’s important to call out the positive when you see it. She has never been afraid to call a store and tell them about a positive experience she has had there and has even called the office of rival schools to tell them how kind and respectful their students and parents were when they visited Alden-Conger for a game.

These small acts can all make a difference. She knows firsthand. Even at 56, she is still brought to tears when remembering how a fellow member of her church, Rita Korman, took time out of her day to write her every couple weeks when she was in college.

Korman is just one of many whose small, loving gestures help make Bryson the woman she is today. She spent several minutes rattling off the names of others who have done the same.

These people are part of the reason that Bryson and her husband, Wayne Olson, decided to move back home when it was time for them to raise their own family.

Community members will see Bryson doing what she loves to do most soon enough. After being rescheduled due to the weather, the Morin Lake Days committee will host an omelette breakfast from 9 a.m. to 1 p.m. March 31 in the cafeteria at Alden-Conger High School. Proceeds will help pay for the community’s fireworks display during the town celebration and sponsor parade participants.