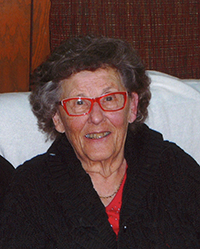 A memorial service will be at 11 a.m. Monday at Good Shepherd Lutheran Church in Wells. The Rev. Mary Iverson will officiate. Visitation will be one hour prior to the service at the church Monday. Interment will be at a later date. The family prefers memorials to Good Shepherd Lutheran Church. Bruss-Heitner Funeral Home in Wells is assisting the family. To leave an online condolence, visit www.brussheitner.com.

Arla was united in marriage to Herbert Meyer on Nov. 20, 1941, in Wells. Together they had two children, James Meyer and Barbara Jean Kjos. Herbert died in 1954.

Arla was greatly involved in Good Shepherd Lutheran Church and was funeral lunch coordinator for many years.

She enjoyed quilting and was a big card player. She loved to play bridge with her bridge club and enjoyed reading a good book. In her younger years, she crocheted a lot. She baked the best pumpkin pie and was a tremendous cook and baker. Arla loved her grandchildren and was fair and generous to them.