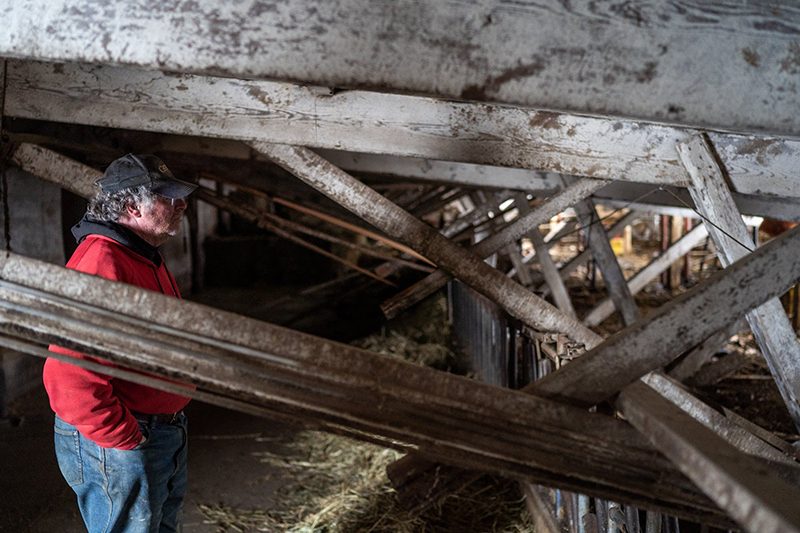 Dave Alberts looks into his collapsed barn at Alberts Brothers, Pine-Shelter Farms near Pine Island on Tuesday. They bought the barn in 1980 and used it as a milking barn until 1997. - Evan Frost/MPR News

Dairy farmers in Minnesota have seen an unprecedented number of barn collapses due to several back-to-back winter storms.

On a damp windy March day, when spring seems like a million miles away, sixth-generation dairy farmer Laura Alberts described her heifer barn in southeastern Minnesota.

“Each pen held about eight or nine calves,” she said.

A few days ago, the weight of snow made even heavier by recent rains became too much, and the barn roof caved in.

“Nobody was impaled or pinned or stuck,” Alberts said. “They were just wondering what happened.”

The family moved 125 animals to two different sites, one the Alberts’ own and the other a neighbor’s. Alberts said the barn is a total loss, but she and her family members are still waiting to hear how much insurance money they’ll get to rebuild.

Yet under the circumstances, Alberts feels lucky. Several of her neighbors lost livestock. In Chatfield, about 40 miles southeast, one family hastily sold off their entire herd of 450 cows after their barn collapsed a few weeks ago, ending a multi-generational business.

“Just having something this big and this stress-inducing has been pretty hard on people,” said Lucas Sjostrom, executive director of the Minnesota Milk Producers Association.

His organization tracks barn collapses and counts at least 45 across the state. Historically, there are only one or two in a typical winter.

Sjostrom said several factors are contributing to the problem, from the excess volume and weight of the snow this year, to the advanced age of many barns, to building designs that are open and airy to promote ventilation.

Most of the collapses have involved milking barns. Sjostrom said those farmers face an immediate challenge because their surviving cows need to be milked at least twice a day or the animal’s health will decline quickly.

“It may mean the end of their life if something doesn’t happen fast,” he said.

Sjostrom’s staff has been working to help farmers find temporary homes for their cows.

Down the road from the Alberts farm, Jason Reber lost six milk cows when a barn he was renting collapsed. He expects to put down eight more due to injuries, which could amount to a $14,000 loss.

And he still needs to find shelter for the remaining cows.

“The pens are full, and no one around has any buildings,” he said.

Reber said this year’s winter has been especially hard on an industry that’s already struggling. Farmers have endured low milk prices for a few years, while labor, feed and fertilizer costs have gone up.

“We’re the last ones to make a buck. You either keep at it, scale down or get out,” he said.

The Milk Producers Association has asked state lawmakers to approve at least $30 million in assistance for farmers to offset costs during a tough time.

The group also plans to consult with farm experts and insurance companies in the next few months to think about how they can prevent future barn collapses.

For Laura Alberts, the loss of her barn is a reminder of how just risky farming can be — and she struggles with how to explain this reality to her farm-crazy 8-year-old son.

“My little guy, Jake, he introduces himself as a seventh-generation dairy farmer,” she said. “These kids, they think they already own it. And you want them to feel that way, but at the same time, I’m like, ‘Buddy, I hope so.’”

With a cold rain starting to pick up, Mike and Jude Brogan’s stand in the doorway of their farmhouse remarking on yet more water falling on their farm. Last weekend, there was already enough water weight to collapse their barn and they lost two steer calves.

The couple said neighbors and relatives came right over to help them get the remaining 23 calves out of the barn.

Jude said the situation would be unbearable without a close-knit community to help.

“It’s all for one and one for all,” she said. “We all have to live together, and nobody gets through life without some bad stuff happening. You have to hold each other up.”

But even with that support, the Brogans are still deciding whether it’s worth it to rebuild.