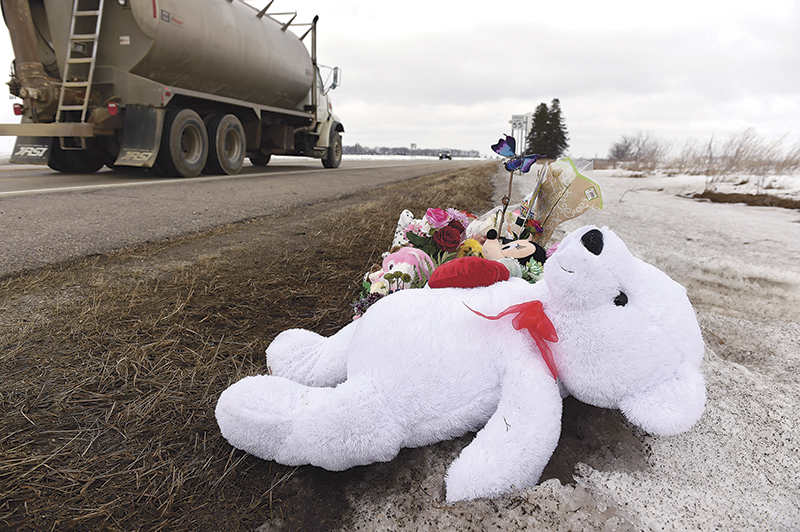 Stuffed animals and flowers are left along the side of the road north of Blooming Prairie on Highway 218 where Noelani Robinson’s body was discovered late last week. - Eric Johnson/Albert Lea Tribune 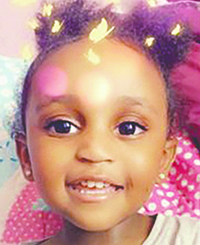 Along a stretch of Highway 218, just outside of Blooming Prairie, a colorful and beautiful makeshift memorial of teddy bears, flowers and balloons greet drivers as they leave the town. Nestled among the scenery were pictures of a smiling, bright-eyed Noelani Robinson.

“Even though this little girl wasn’t a part of our community, she has touched a lot of people here,” said Blooming Prairie Police Chief Greg Skillestad. “It’s one thing to deal with the loss of anyone, it’s harder when you have a child and having to deal with that. It’s harder.”

The 2-year-old girl went missing from her Milwaukee home last Monday, shortly after her mother, Sierra Robinson, was found shot and killed. Noelani’s father, Dariaz Higgins, was arrested for allegedly murdering Sierra and for abducting Noelani.

The makeshift memorial was erected where Noelani’s body was found wrapped in a blanket just outside of Blooming Prairie, more than 200 miles away from her home. The Bureau of Criminal Apprehension said that the preliminary cause of death was from blunt force trauma to the head.

As the nation’s attention was drawn toward the case, the heartbreaking outcome became a reality.

Despite Noelani not being from Blooming Prairie, the small town of about 2,000 still felt the effects of the loss of innocent life and wanted to show their support for those who knew and loved Noelani.

Getting together with the Revs. Heidi Heimgartner and Mike Walerius of First Lutheran Church of Blooming Prairie, Skillestad shared that collections were being taken for sympathy cards, drawings and other small tokens that would eventually be mailed out to the Robinson family.

Heimgartner declined comment on the efforts, mostly redirecting all press to the news release posted on the city of Blooming Prairie’s Facebook page.

“Thank you to our law enforcement and the community for your prayers, thoughts and gestures of sympathy for the Robinson family and friends,” the statement reads.

Skillestad was not at all surprised that the community wanted to do something to show their love for others. During the darkest times, he felt reminded that there was more good than evil.

“It makes me feel great, and it’s fantastic to see that there are good people in this world,” he said. “As a law enforcement officer, we respond to help others in need. We’re not always seeing the best in people while responding to an incident or situation that’s maybe not the happiest. We’re pulling together as a community, and this makes all of our officers feel good on the inside.

“Blooming Prairie is a rare city,” he said. “I tell you what, we’re full of love and care here. We’re a caring community and we’re coming together.”

MILWAUKEE (AP) — A woman traveling with the man accused of killing the mother of his child in Milwaukee is charged with aiding a felon.

A criminal complaint says Deloise Lipsey was with Dariaz Higgins for several days after Sierra Robinson was fatally shot and another woman was wounded last week. The complaint says Lipsey knew about the homicide but did not contact police.

Authorities say Lipsey and Higgins passed through Minnesota, Illinois and Michigan as police searched for Higgins and issued an Amber Alert for his missing 2-year-old daughter, Noelani Robinson. The child’s body was found in a ditch in Minnesota four days after Higgins and Lipsey were arrested on March 13.

The Minnesota Bureau of Criminal Apprehension says Noelani died from blunt force trauma to the head. Her death remains under investigation.