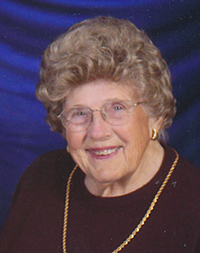 Elna was preceded in death by her husband, Bernard; daughter, Barbara, and husband, Dick, and their three children; her daughter, Joy; and her son, Richard.

It was in Albert Lea where Elna began taking college courses and eventually obtained a Bachelor of Science degree in social work from Mankato State College. She became the assistant dean of students at the local Lea College. She was active in the League of Women Voters, Junior Achievement, the YMCA, the local Art Center and Audubon Society, Area Agency on Aging and the Presbyterian church. She was appointed by governors Quie and Perpich to the Board for the Minnesota Community College system from 1977 to 1983.

In her 102 years, Elna never did retire. She was an avid gardener.  She and Bernard had a beautiful yard and soon became interested in native flowers and grasses. She helped the Audubon Society develop the Blazing Star Trail. This was an interest that she continued when she moved to Shawnee, Kansas. Even from her wheelchair, she was able to plan and help plant plants at Shawnee Presbyterian Church grounds and Tallgrass Creek Senior Living grounds.

With determination and persistence, she was able to accomplish a staggering amount to make this a better world for humans and a healthier planet through conservation and stewardship.

Donations in remembrance of Elna can be given to Friends of the Earth International or the National Audubon Society.