‘Finally, this is happening for our kids, also’ 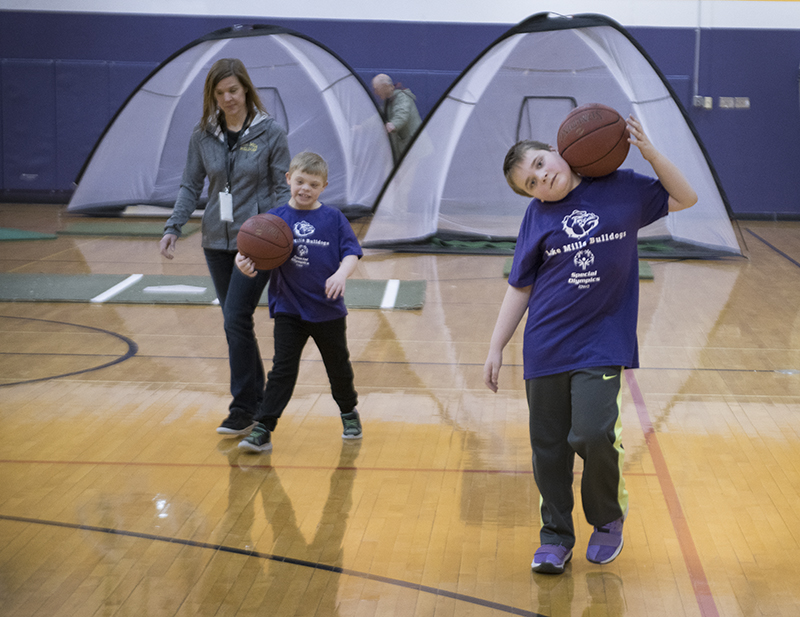 LAKE MILLS — After success at regionals, two area third-graders were set to square up for their shot at the Special Olympics Iowa Saturday.

“When we talk about the competition and stuff, they get excited and they smile,” she said.

This is Schmidt’s first year teaching at Lake Mills. She started helping students prepare for the Special Olympics while teaching in Garner, Iowa, and when she moved schools, she said she was asked to start getting students in Lake Mills involved.

“I just saw what a great program this is,” Schmidt said. “… They get into this and their attitudes change. They see, ‘Oh, I can do something. People are cheering for me.’ … Just seeing them come out of their shells and do amazing things is totally worth it.”

The Level I individual basketball skills competition includes three events: spot shot, 10-meter dribble and wall pass. The students were placed into different divisions based on data collected by coaches during practice. To be eligible to compete, athletes must be 8 years old and have some type of disability, Schmidt said.

To spot shot, Carlson and Behrens stand at six marked places around the hoop and receive points if they hit the rim or make it in the basket. Spots further away from the hoop are worth more points.

During the 10-meter dribble, judges are looking for speed. Students receive a one-second penalty for any illegal dribbles. They have two trials, and the better of the two is used for scoring.

The wall pass asks students to throw the basketball at the wall and to make contact within a marked square. The athletes receive additional points for catching the ball in the air after it hits the wall.

“They both do well at the wall pass,” Schmidt said. 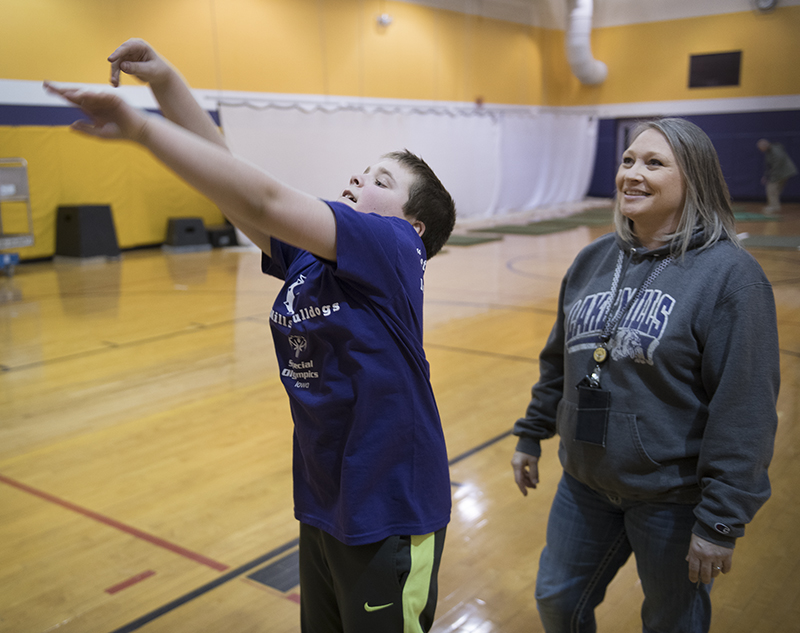 Behrens said this is his favorite activity of the three, while Carlson said he likes to shoot. Schmidt said Carlson is also good at the dribbling competition because he has speed on his side.

The two practice some every day, joined by learner assistant Kim Renneker. Though they may not touch on all three events each time, Schmidt said it provides the students a good opportunity to get a break from the classroom.

“‘You guys need to do a little running,’” Schmidt will say. “‘Let’s practice dribbling.’”

High school athletes have also stopped in during their study hall to practice with the students, and some attended the regional competition to watch Carlson and Behrens compete.

Also watching was Anna Behrens, Cooper Behrens’ mother, as well as her husband and daughter.

“That’s the first time we’ve ever seen Cooper do anything like that, and just to see the excitement in him and the smile … to see that from him and to see his involvement and how he had such passion in his sight was something new for us, so we were all very happy,” Anna Behrens said.

Schmidt approached her students’ parents at conferences before school began and shared the option students had to compete.

“It was just like an excitement on all of us, like, ‘Finally, he’s going to be involved in something, you know, other kids get involved in (on) a daily basis,” Anna Behrens said. “… For these kids, it’s just a little bit (harder) for them.”

She said Schmidt has done a “wonderful job” for her student.

“This school year has been amazing for Cooper,” Behrens said. “He’s come leaps and bounds this school year, and a lot of it has been from her coming to our school.” 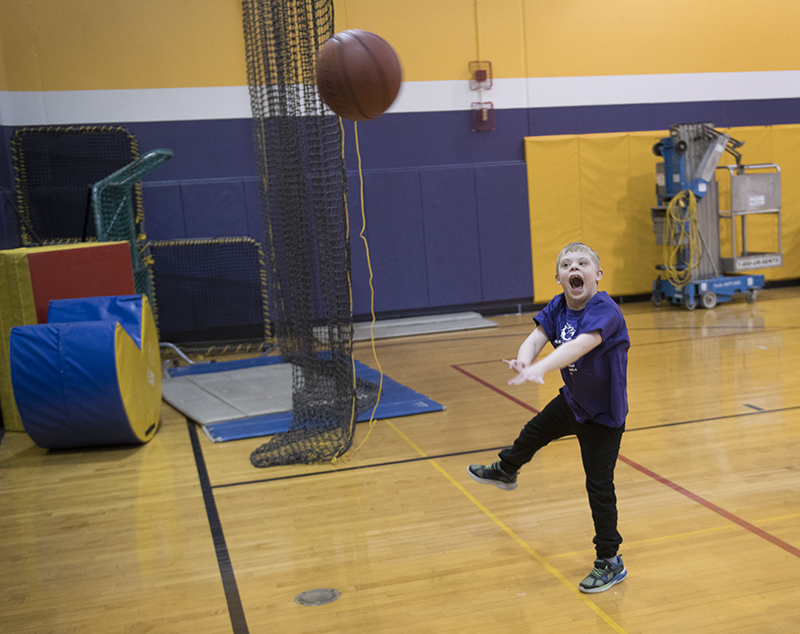 Schmidt said it has been exciting to have two first-place area winners in her first year at the school.

For Cooper Behrens, it has been an exciting experience, too, his mother said.

“He knows what’s going on with the basketball,” Anna Behrens said. “He wore his ribbon for probably two days that he won…. We have a countdown until we go on Saturday.”

According to both Schmidt and Behrens, the school and community have also celebrated the two athletes’ success. It was on Twitter. It was on Facebook. It was everywhere that they won, Cooper Behrens’ mother said. She said it was an “outpouring” for these two students.

“Thank you,” she said. “Finally, this is happening for our kids, also.”

In addition to having T-shirts made for each of the eight athletes — paid for by the Lake Mills sports boosters — over 70 staff members ordered shirts, too, to show support. The shirts are purple, branded with both the Lake Mills bulldog and the Special Olympics logo on the front and the Special Olympics motto on the back: “Let me win. But if I cannot win, let me be brave in the attempt.”

“Cooper has sat through seven years of sports watching his sister and always cheered her on,” Anna Behrens said. “So to have an event that is all about him, and he got to hear the cheers and his name be called, it was an unforgettable experience for him. It was one of the first times we’ve seen that kind of excitement out of him. He knew that it was his day.”

This year, Lake Mills has eight students competing in the Special Olympics, including Behrens and Carlson for basketball and six other students, who have recently begun practice to compete in track and field in April.

Schmidt hopes to get more students involved as awareness of the opportunity grows at the school, she said.

Anna Behrens said her son will also compete in track and field. He is working on running and throwing a softball for the April 11 regional competition.

Right now, though, she said Cooper Behrens is reveling in being a basketball star. She can hear it from the sound of his voice.

“He’s excited,” Anna Behrens said of her son. “He loves it. He’s a basketball star in his mind — and ours, too.” 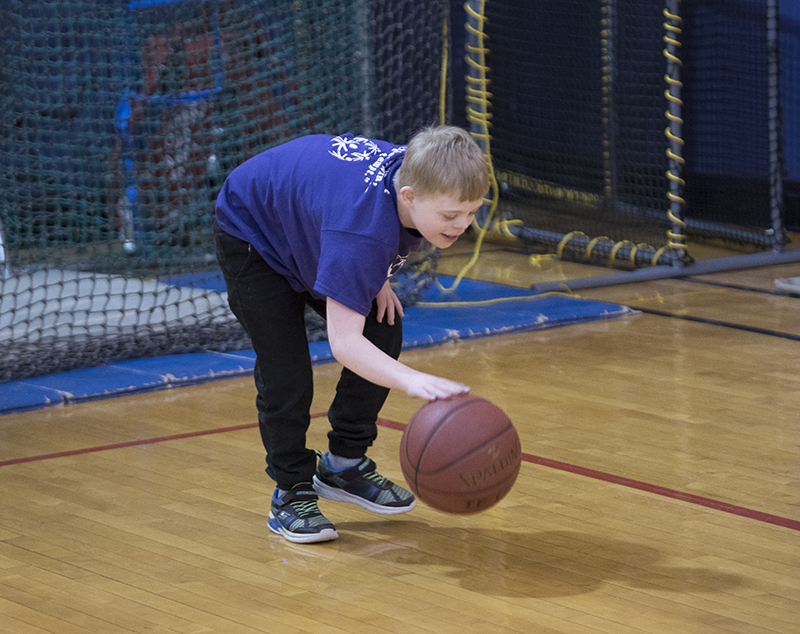