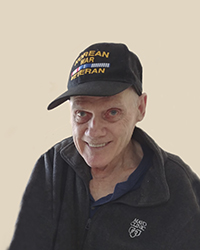 Funeral services were at 10 a.m. Feb. 19 at Wayzata Free Church in Plymouth. Visitation was prior to the service at the church. The Rev. Kevin Meyer officiated. Burial was in Fort Snelling National Cemetery in Minneapolis.

Harold Reuben Hanson was born Sept. 14, 1930, in Alden to Haakon and Alma (Thompson) Hanson. He grew up in Freeborn County, attended elementary school in the District 16 rural school and graduated from Freeborn High School with the class of 1949.

Harold served his country in the United States Army in the Korean War.

On Sept. 28, 1962, Harold was united in marriage to Delores Born at Evangelical United Methodist Church in Waseca. They made Long Lake their home and they were members of Wayzata Free Church. Harold enjoyed hunting, fishing, working on automobiles, singing, walking and his cats and dogs.

He was lovingly known by his family as Harry.

Arrangements were made with Dingmann Funeral Care Burial & Cremation Services of Annandale.