Herbert Kervin Andersen Jr. passed Thursday, March 7, 2019, at Thorne Crest Senior Living Community in Albert Lea, where he had been a resident for two years. 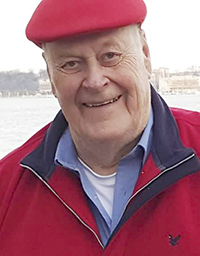 A loving husband, father, grandfather and friend, Herb was born Aug. 28, 1932, to Herbert Sr. and Grace Andersen. He grew up in Montevideo, served in the Korean War and later attended Hamline University before starting a career in retail that spanned over 50 years.

Herb met Barb (Canton) in high school and they united in marriage Aug. 28, 1955. They were lifelong partners in life and in business. On Thanksgiving Day 1965, they moved to Albert Lea and became a fixture in the community.

Herb always looked forward to summers up north, where he entertained a constant stream of family and friends at the “Little Red Cabin” and later their year-round cabin on Lake Roosevelt.

Herb was a proud veteran and a longtime member of First Lutheran Church, Shriners, Masons, American Legion and Kiwanis Club.

His family said they miss his love, thoughtfulness, welcoming smile for everyone he met and the gratitude he had for life.

Herb is survived by Barb, his wife of 63 years; son, Tom (Sherri), of Alexandria, Virginia; daughter, Julie, of Edina; and four loving grandkids, Alexa of St. Paul, Thomas of Davenport, Iowa, Daniel of Madison, Wisconsin, and Megan of St. Paul.

He is preceded in death by his parents and brothers Bill and John.

Visitation is from 5 to 7 p.m. Sunday at Bonnerup Funeral Service in Albert Lea. A graveside service will be at 9:30 a.m. Monday, followed by church visitation beginning at 10 a.m. The funeral service will be at 11 a.m. at First Lutheran Church. Military honors will be accorded by Albert Lea area veterans groups.

The family would like to thank the staff at Thorne Crest memory care and the long-term nursing facility for their loving care.

As Amy told her co-workers on the news of Herb’s passing, “Herb’s on his way to Montevideo to get some ice cream.”

In lieu of flowers, memorials may be directed to First Lutheran Church Peace and Power or the Salvation Army of Albert Lea.