Where everyone stands today is the direct result of the footsteps of those who walked before them. Citizens of the past shaped their communities, enriched their cities and laid the groundwork for all who would follow. Whether it was aiding in establishing a city, contributing in the areas of business and job growth, or enhancing the lives of others by bringing about changes in education, these individuals positively influenced the lives of others who, in turn, have the opportunity to positively affect the lives of yet another generation.

This list of citizens of the past was collected with the assistance of Linda Evenson of the Freeborn County Historical Museum. 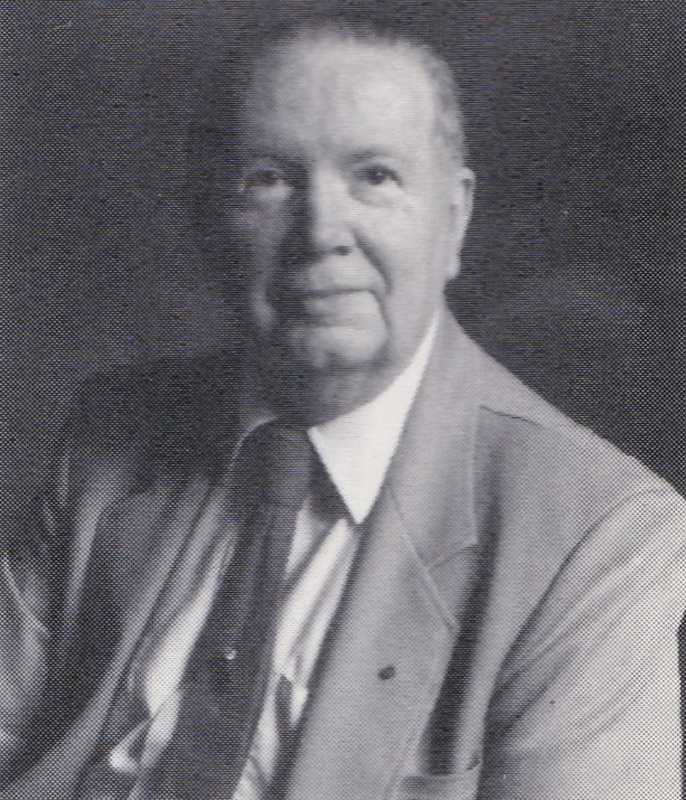 World-recognized artist Lloyd M. Herfindahl had many ties to this area. Born in Emmons to Albert and Betsy (Singelstad) Herfindahl, Herfindahl was baptized at Lime Creek Church in rural Lake Mills. He attended schools in both Emmons and Albert Lea before he began his work as a freelance artist. In addition to studying art at the Minneapolis School of Art, he privately studied under Austrian expressionist Oskar Kokoschka and Adolph Dehn. In 1957, he founded The Albert Lea Art Center. 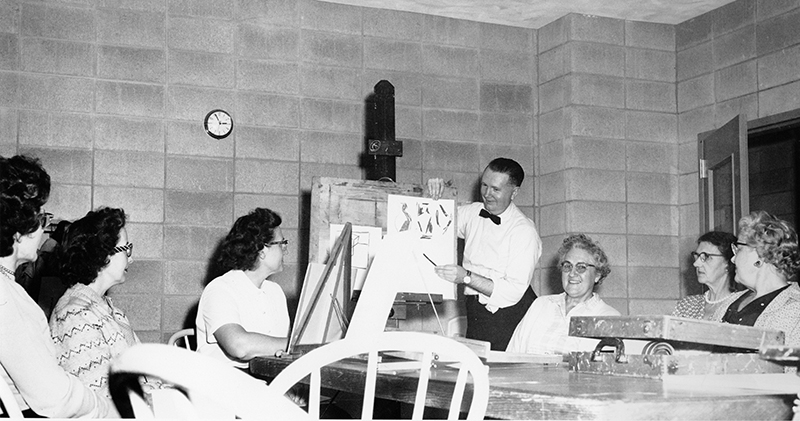 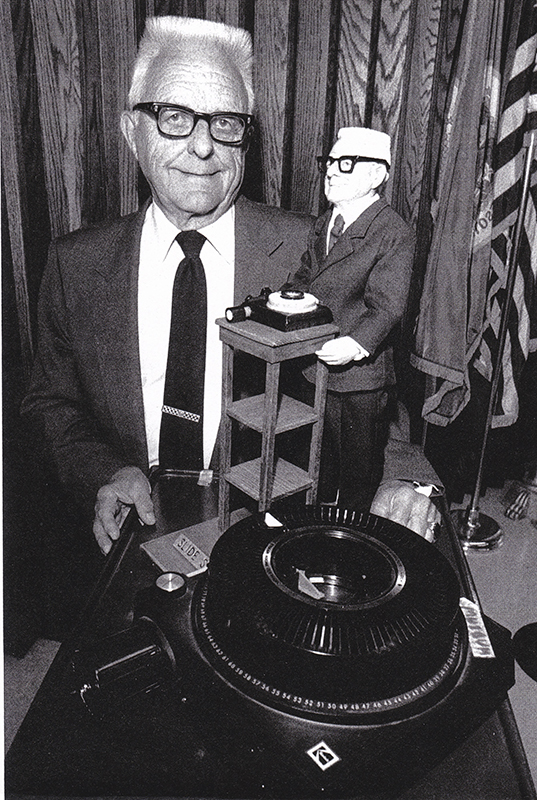 Bidney Bergie poses with a doll made in his likeness.

Born and raised in Forest City, Bidney Bergie came to Albert Lea in 1939 to become a meter reader and serviceman. He entered the Army in 1942, married in 1943 and was deployed to Africa and Italy in 1944. He returned to the U.S. in 1946 and was honorably discharged.

Upon his return to Albert Lea, he continued to work at Interstate Power Co., working his way up the ladder until retiring in 1982 as a district manager.

He also worked for a year at the Albert Lea-Freeborn County Chamber of Commerce as Jobs Inc. secretary, served on the Norwest Bank Board, Naeve Hospital boards and served on the building committee for the 1976 hospital.

Bergie was a member and past president of the Lions Club, and designed and helped build the Lions bingo stand at the fairgrounds. He also built many exhibits at the Freeborn County Historical Museum and enjoyed giving historical slideshows throughout the area.

A doll created with the likeness of Bergie is displayed on the wall in the Freeborn County Historical Museum Library. 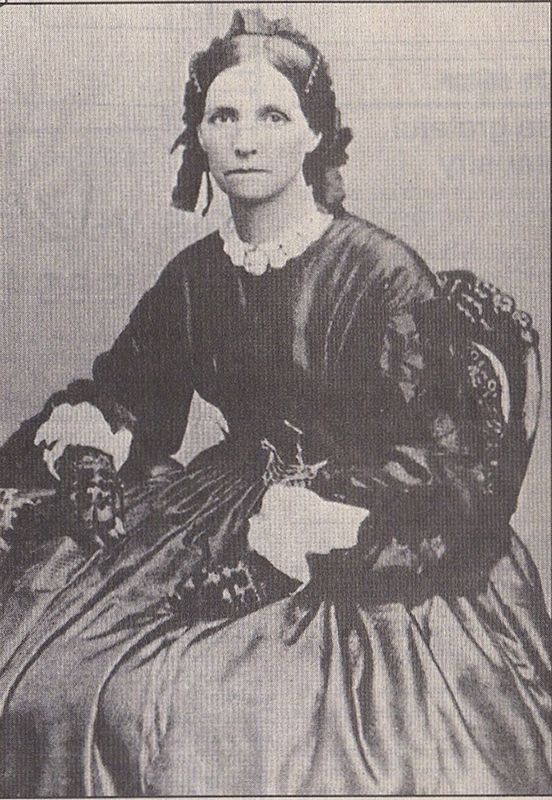 A native of New York, Dr. Elizabeth Stacy moved to Geneva in 1856 and then Albert Lea three years later. She is remembered as the first female physician to practice in Minnesota. For several years during the Civil War, she was the only physician and nurse to serve those in Freeborn County, as others were enlisted in the war effort.

The Dec. 26, 1906, Freeborn County Standard said of Stacy, “Deceased was one of the noble and representative pioneers, who gave character to the early history and progress of the county. She was one of the foremost and beneficent factors in the development of the social, moral and material qualities, which have given Freeborn its noble rank and repute, and during her life here of half a century, her personality has been known and familiar to all and all have esteemed and loved her for the good she has done and for her rare qualities of head and heart.” 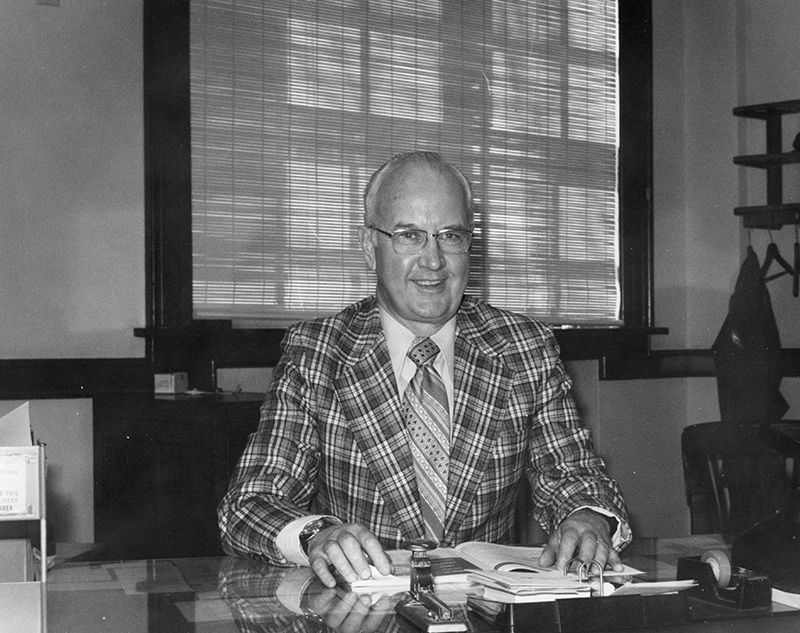 Stan Sevaldson prior to his retirement as postmaster on April 30, 1978.

Stan Sevaldson came to Albert Lea in 1939 to play baseball with the Albert Lea Packers. In 1940, the Packers were the state champion city baseball team. After working at Wilson & Co. for a couple years, he served his country in the U.S. Army Air Corps during World War II. Upon his return, he continued to serve in the Air Force Reserves and took a position as a mail clerk at the post office in 1945. In 1958, he was named postmaster, a position her served in for 20 years before retiring. 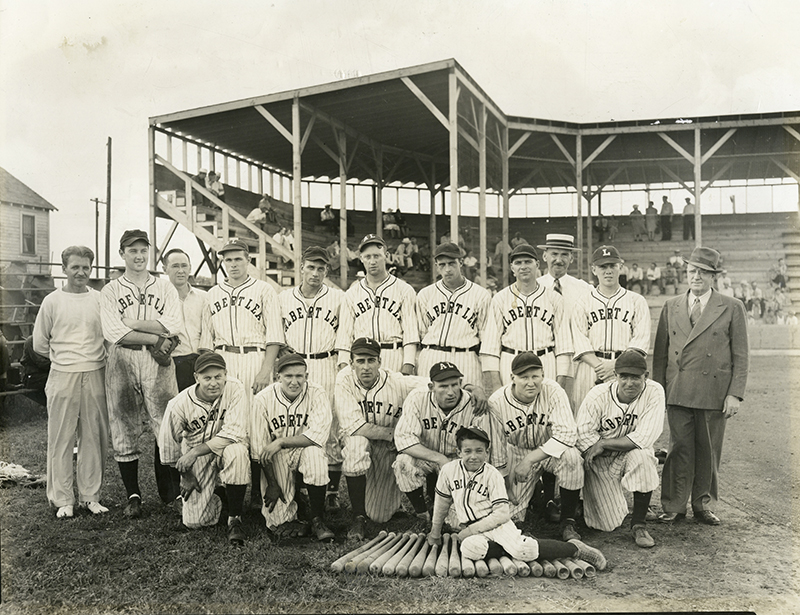 He remained passionate about baseball. He played on the St. Louis Cardinals farm team and coached Legion baseball for many years.

In his final years, Sevaldson was a driving force in the organization and development of a skateboard park in Albert Lea. 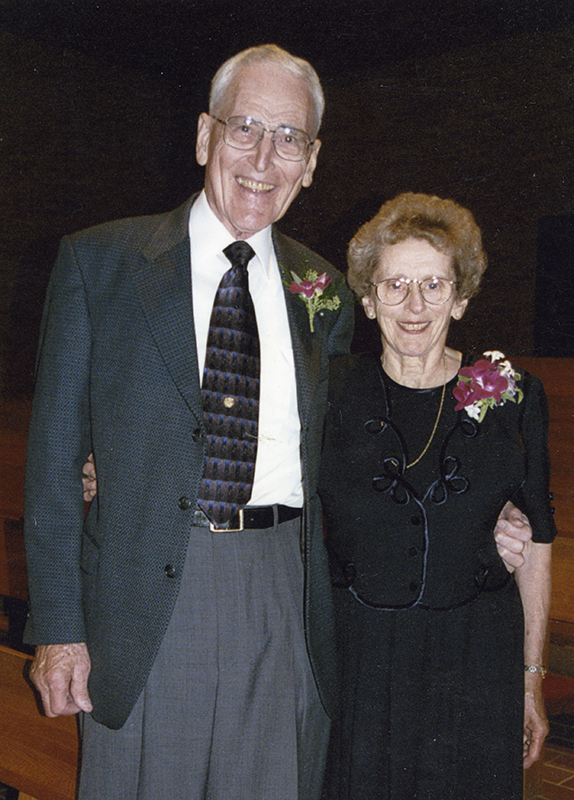 Born and raised in Wisconsin, Ruben Schmidt moved to Alden in 1947 after serving in the Army Medical Corps in Korea.

He began his medical practice in the previous practice of Dr. T.M. Hansen. In addition to being a physician, Schmidt served in the position of Alden’s mayor for 14 years, during which time the town saw the conversion of a party line telephone service to a private, self-dial telephone service and the installation of the Alden sewer system in 1963, which provided substantial savings for the community. He was also active in the Alden Lions Club and Alden Area Development Corp. His appreciation of history led to his involvement in the development of the Alden Area Museum. His appreciation for learning led him to join a group of regional leaders who founded Lea College — now Riverland Community College.

Prior to his retirement in 1985, Schmidt joined the Albert Lea Medical Center staff and the Alden Clinic became one of its satellite clinics. This ensured continued local medical care for the Alden community. 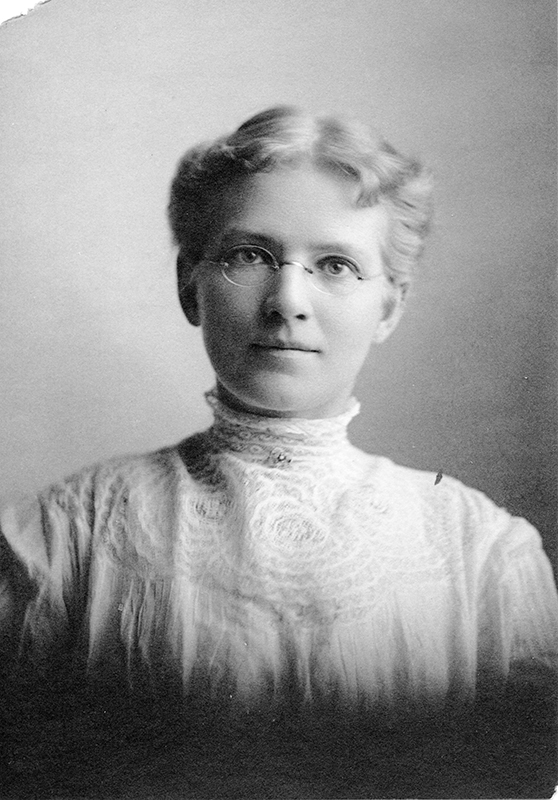 Sara Janson, a native of Albert Lea, graduated from Albert Lea High School at 16. After high school, she completed teacher’s training, becoming a teacher and then a principal. She also put herself through medical school. In 1902, she was the first woman to graduate from the University of Chicago with a degree in medicine, according to Freeborn County Historical Society and museum records. 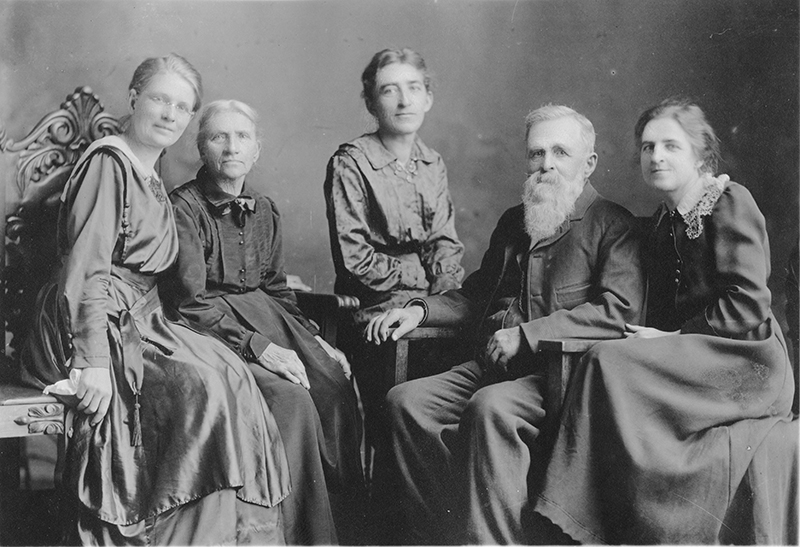 She was a pioneer in the fields of medicine, education and women’s suffrage and equal rights. On March 16, 1910, the Chicago Record-Herald noted she was the only woman in Chicago who had registered to vote.

On May 29, 1941, she delivered a commencement address to the Albert Lea graduating class, which she entitled “Hurdles.” She advised the class on how to face the hurdles in life, “by being prepared for them and rising above them,” she said. 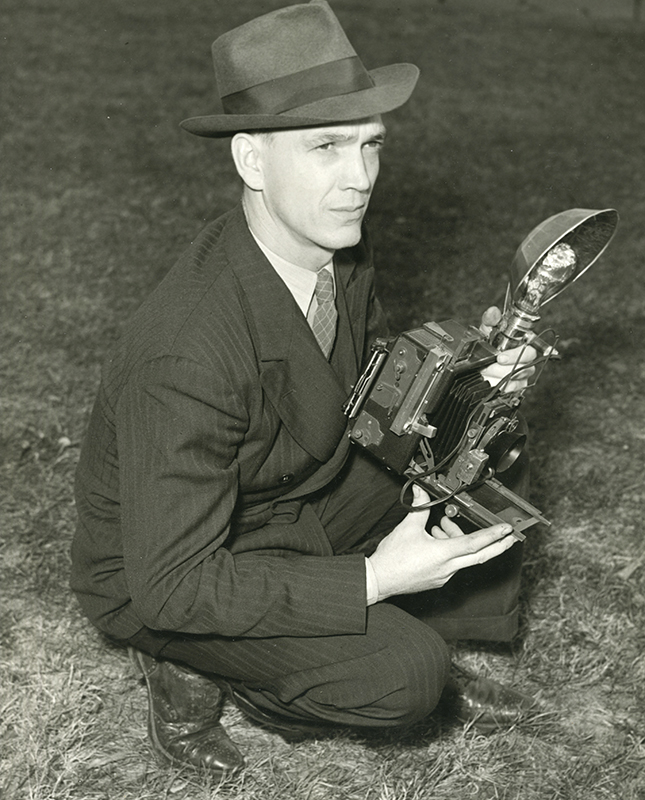 A native of Hartland, Samuel “Otis” Simonson was a lifelong resident of Freeborn County. He was noted to be a strong supporter of schools and civic organizations and a charter member of the Chamber of Commerce, Kiwanis club and Sons of Norway.

Simonson entered the printing business in 1882 with partner L.S. Whitcomb. Together they formed Albert Lea Publishing Co. and printed the Albert Lea Evening Tribune for a number of years. In addition to being a publisher, Simonson also served as the head of several local businesses, including Queen Stove Works and Olson Manufacturing Co. At the time of his passing, he was a stockholder of the newly organized American Gas Machine Co.

Simonson was also a veteran. During the Spanish-American War he helped to form Company I of Freeborn County, serving as its second lieutenant. Upon conclusion of the war, he became the department commander of the Minnesota Spanish War Veterans.