Jay Alan Johnsrud of Westcliffe, Colorado, passed away Saturday, Jan. 5, 2019, after a year-long battle with cancer. His wife of 37 years, Ann (Seipp), and his son, Adam Johnsrud, both of Westcliffe, were by his side. He was 60. A celebration of Jay’s life will take place this summer in Minnesota. 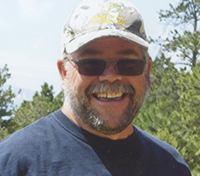 Jay’s career took him to Texas in 1980. He built oilfield equipment for Steward & Stevenson and was a fleet supervisor for UPS and Bright Truck Leasing. Jay and Ann lived in Texas for 35 years. In November 2015, he retired to the mountains in Westcliffe after working as a mechanic for American Airlines in Dallas for 27 years.

Jay lived an adventurous and productive life. His smile and sense of humor will be greatly missed.

He was preceded in death by his father, Don Johnsrud; brother, Joel Johnsrud; and nephew, Caleb Quesenberry.