Jeffrey David Lyle, 56, of Little Rock, Arkansas, passed away Saturday, March 9, 2019, at Iowa Methodist Medical Center in Des Moines, Iowa, following complications from strokes he suffered in December 2018. Jeff was surrounded by his family as he entered heaven. 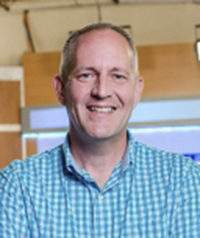 He was united in marriage to Julie Bendtsen on May 27, 1989, in Austin and resided in Davenport, Iowa, for many years, raising two beautiful daughters.

Jeff grew up on his family’s farm, milking cows and doing fieldwork alongside his father and two brothers, Tom and Bob. He was heavily involved in the 4-H program, often showing livestock at the local county fairs, the Minnesota State Fair and Ak-Sar-Ben. From an early age, Jeff was either taking apart an old radio or shooting stop action movies with Fisher Price Little People. As a teenager he worked at Hanson Camera and also served as the janitor at First Baptist Church in Austin. During college he worked at RadioShack.

Jeff’s love of music and broadcasting began at an early age and led to many adventures. He started singing and playing cello in many concerts in elementary school and continued through his college years. He toured with the Cedarville University Swordbearers, lending his beautiful tenor voice to the group while also running and setting up the sound system. He helped run the campus radio station. In Davenport, Jeff worked at a CBS station, joined forces with a business partner and started a Christian radio station that exists in Des Moines to this day. He started several TV production businesses and pioneered a process of broadcasting over fiber optics.

In 2013, Jeff began working with a group in Little Rock, and The Media Gateway was formed. They produce news for stations in many areas of the country and provide master control services. Jeff was blessed with great reserves of love and goodwill from clients, friends and acquaintances. He will be missed in the TV industry — particularly the low-power world, where Jeff was always in their corner, helping people get from good to great, from OK to good and from nothing to actually being in business.

Jeff’s faith in Jesus Christ was lived out in many ways. He was kind and generous to a fault and would go out of his way to help anyone. He dearly loved his family and was tremendously proud of his talented daughters — Rachel, a graphic designer, and Samantha, a soon-to-be horticulturist.

Memorials may be made to the family for the girls’ education.