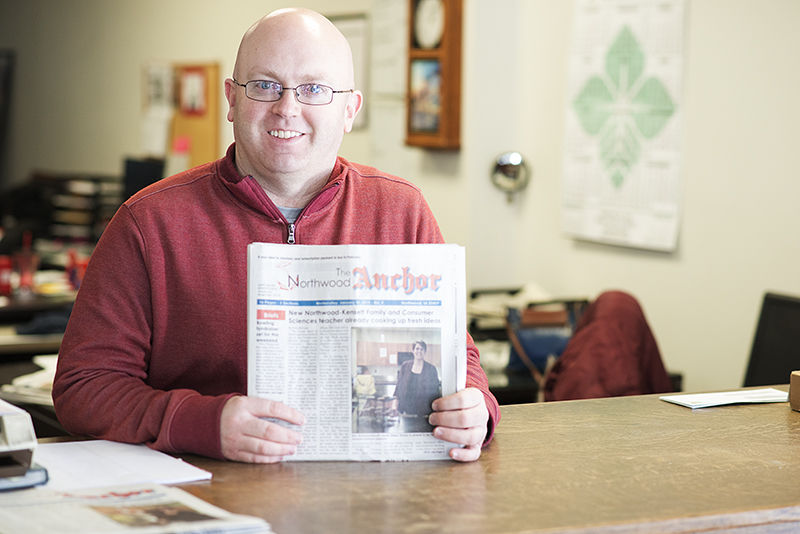 Woring as a reporter and photographer at the Northwood Anchor since the end of 2003, Kris Kenison took over as publisher and owner of the paper in 2018. Tyler Julson/Albert Lea Tribune

NORTHWOOD — Growing up on a family farm just outside of Northwood, Kris Kenison has been involved in the community for most of his life. He became an even bigger figure in the community in 2018 when he became the owner and publisher of the local newspaper, the Northwood Anchor.

After graduating from Northwood-Kensett High School in 1997, Kenison attended Waldorf College in Forest City, before moving to Winona for a year working at Target and a radio station group.

When a reporter/photographer job at the Anchor opened up suddenly in 2003, Kenison decided to apply for the position and move back to his hometown. When the previous owner, Jane Podgorniak, approached the employees about buying the paper from her, he said the decision was a no-brainer for him.

“I just wanted to keep it local, keep it with somebody who knew the area,” Kenison said. “I’ve always taken pride in covering the local government, and I wanted to keep myself involved with that as much as possible. I thought if somebody else from outside the area bought it, that might change. I managed to get the financing together to buy it and keep it going with everybody that’s already here.”

Kenison said he started down a career path in communications when he started college. He didn’t know exactly what he wanted to do, but knew he wanted to be involved in the media in some capacity. Being heavily involved with the radio station at Wartburg got him the radio job in Winona, where he worked for multiple stations.

Even before becoming the owner of the Anchor, Kenison wore multiple hats for the paper. He was a reporter/photographer, copy editor and IT director. After taking over, he had to teach himself how to work in ad sales on top of the general things that come along with running a business.

He said taking on all those roles is the most difficult part of the job. Trying to stay organized and not get too overwhelmed can be hard at times, but he said being able to keep the local community informed makes everything worth it.

“The most rewarding part is the same as it’s always been,” Kenison said. “It’s knowing that we’re keeping people informed of what’s going on in their community, helping people make connections so they know what’s going on.”

Kenison said the next big task he plans to take on at the Anchor is getting a website up and running. He said they’re a little behind the times without having a website, and he’s excited to offer that to the community.

In his free time, Kenison said he enjoys being with his family, especially his two young nephews. He also likes to play video games and exercise; he said he’s on a 670-day streak of getting at least an hour of exercise in.

“There’s no way I could do this job without everybody else in the office,” Kenison said. “I wouldn’t have even thought to try if I didn’t know the people here beforehand weren’t on board with it. I wouldn’t have lasted the six months I have without all the help and support from everyone here in the office.”