‘Kindness can be done by all of us’ 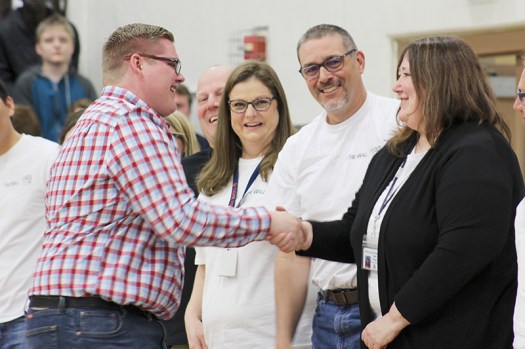 Wall of Inspiration 2019 inductee Joey Witham shakes hands with committee members and former inductees during Friday’s ceremony at Albert Lea High School. “He inspires me to always be kind and be the best I can be,” Witham’s nominator wrote in the nomination. - Sarah Kocher/Albert Lea Tribune 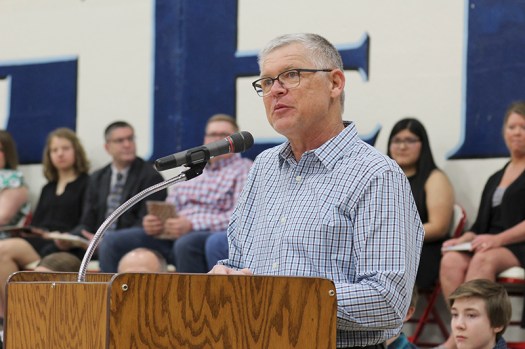 Brian Kuphal encourages those in attendance at the 2019 Wall of Inspiration ceremony to be kind, because everyone is capable of it. The Wall of Inspiration began in 2004 in honor of Kuphal’s son, Josh, who died in 2002. - Sarah Kocher/Albert Lea Tribune 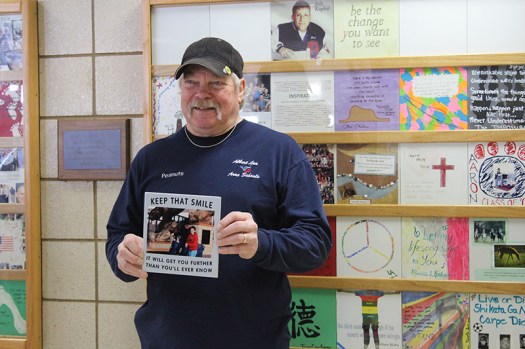 Roger “Peanuts” Christensen poses for a photo with the plaque he created for the Wall of Inspiration. He encouraged Albert Lea students to remember how a smile can set you apart. - Sarah Kocher/Albert Lea Tribune 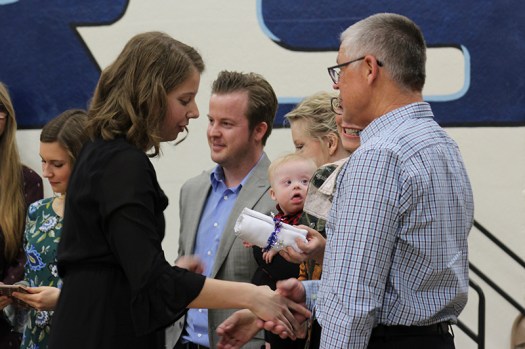 Samantha Skarstad, a 2019 Wall of Inspiration inductee, shakes hands with the Kuphal family after being recognized at Friday’s ceremony. Skarstad is one of eight inductees this year. - Sarah Kocher/Albert Lea Tribune

Though this year’s committee chose to recognize just eight people for it, community member Brian Kuphal said there is something important about kindness: everyone can show it.

The wall was established in 2004, following the 2002 death of Albert Lea High School graduate Josh Kuphal, who was born with spina bifida. Brian Kuphal said he and his wife, Kathy Kuphal, did not realize the impact their son had on others until after he died. Josh Kuphal had a zest for life and a positive, infectious personality, Brian Kuphal said.

“If he was an inspiration to many, there are probably many more people out there that inspire us that we don’t know and don’t recognize,” he said.

Teran Lazaro said she was surprised to be recognized.

“I didn’t really think that, like, what I did or the small actions that I’ve done had an impact on people — or at least, that big of one,” she said.

Her mother, Marisela Lazaro, said she was proud to see her daughter recognized for her hard work, kindness and respect. Her father, Victor Teran, said her parents try to be there for their daughter and support her. He said he knows she can do anything.

“Every day she tries to be her best,” Lazaro said.

Wall of Inspiration inductees are given a white tile to decorate in a way that is meaningful to them. Each new inductee explained the meaning of their tiles on a video shown at the ceremony. That tile was then hung in a hallway near the cafeteria, joining the over 120 others from past inductees.

“The wall is a cornucopia of color that is filled with quotes and pictures that are a lasting story of one person who has been honored to be placed on the wall,” presenter Jim Haney said.

Brian Kuphal said he and his family have tried to learn from the positive and negative and let it teach them about becoming better friends and kinder people.

“Inspiration is a powerful thing,” Kuphal said. “Seize that power. Kindness can be done by all of us.”

Wilner is involved in basketball, track, show choir, National Honor Society, LINK Crew, the musical and his church youth group. He also works at Hy-Vee. He likes watching movies, being with family and traveling. He is inspired by his parents.

“Andrew is one of the most determined and uplifting people in my life,” the nominator said in a letter.

Tasker, who grew up in Albert Lea, has worked in the media center for over six years. She is inspired by watching her children grow. She likes to bowl, spend time with family, walk her dogs and be outdoors.

“Our school is a better place because she’s here, and we’re lucky to have her,” Tasker’s nomination letter said.

“Aline is a role model for how students should be,” her nomination letter said.

Teran Lazaro likes to read, spend time with friends and family, play with her dog, Astro, and memes. She plans to go to college at St. Scholastica.

“Big ideas have small beginnings,” she said in her video. “… It doesn’t really matter where you come from. You can make a change in the world.”

Christensen, an Albert Lea High School graduate, is a custodian at the high school and has worked for the district for 10 years. He is inspired by people with a happy outlook on life, and those who do not give up. He likes to go to his son’s cabin and visit the casino.

“Peanuts is a bright spot in my day,” Christensen’s nominator said in a letter.

Witham plays hockey, football and baseball. He is also involved in his church and referees hockey. Sports also permeate his hobbies, which include watching sports and playing sports-related video games. Witham is inspired by his parents for everything they have done.

He plans to attend Riverland Community College for carpentry.

“He always works so hard to go out of his way to help others,” Witham’s letter of nomination said.

“Bob Tewes has been not only an inspiration, but a gift to Albert Lea and the students of Albert Lea High School for the past 20 years,” the nominator said in a letter.

Tewes is inspired by passion, and his hobbies are music, cooking, golfing, involvement in his children’s lives, his dog and gardening.

“I knew Josh as a youth and am humbled and honored to be on the wall in his memory,” Tewes said in his video.

“She is willing to leave her comfort zone and reach out to students that are often overlooked,” her nomination letter said.

Skarstad plays tennis and basketball and participates in LINK Crew, National Honor Society, Humanities Club, Key Club, 4-H and her church. She likes to play sports, work out, read, rollerblade and spend time with family and friends. She is inspired by people who do the right thing.

Herman graduated from Albert Lea High School and returned to the halls as a resource officer. He has been a police officer since 1996. He is inspired by his family.

“Officer Herman is so proud to be an Albert Lea Tiger,” the nomination letter said.

Herman was unable to attend the ceremony. His tile was presented by his son, Zach, and his daughter, Jessica.