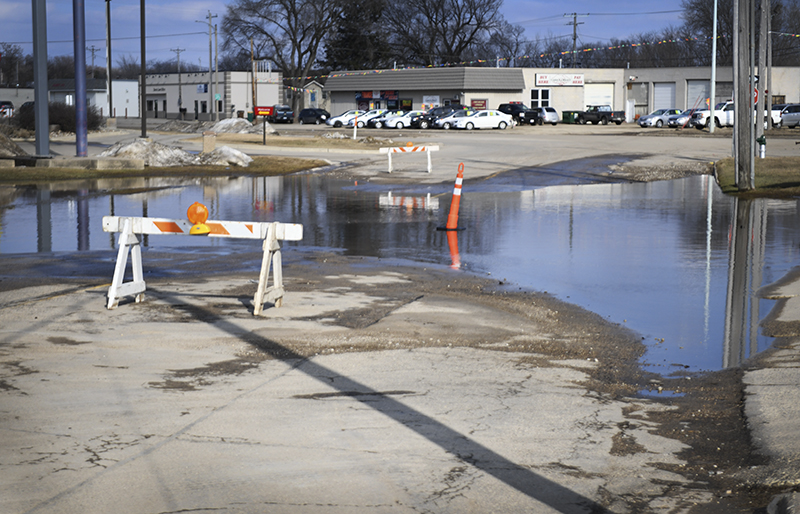 A portion of East Clark Street near the intersection with East Main Street remains barricaded off due to standing water Tuesday. - Colleen Harrison/Albert Lea Tribune

As water goes down, when will East Main Street reopen?

Water levels on Albert Lea and Fountain lakes peaked on Saturday and have gone down about two-tenths of a foot each day since Saturday, according to Albert Lea City Engineer Steven Jahnke.

U.S. Highway 65 remains closed in both directions, though Jahnke said he is hopeful the road will be reopened late this week, though it is too soon to say definitively. The road has been closed for a full week.

The engineer said other than initial flooding in the basements of some houses when snow first started melting, the city has not seen many major impacts from flooding this spring, other than the closure of Highway 65, which is also known to many local residents as East Main Street.

“We’ve had the best scenario we possibly could,” Jahnke said. “It gets warm during the day and then gets below freezing at night. It gives us a chance to catch up.”

He advised people to avoid taking left turns on Katherine Street onto Bridge Avenue until Highway 65 has reopened because of traffic congestion on Bridge Avenue.

He said there has been a lot of discussion about temporary traffic control measures until the thoroughfare is open — including a three-way stop at the intersection of Katherine Street and Bridge Avenue — but the conclusion reached was that there is too much traffic on Bridge to make this option work effectively.

Instead, he is encouraging people to try to make their turns at intersections with existing traffic controls at Garfield Avenue and Marshall Street.

“We believe that’s better than trying to put in a three-way stop,” he said.

Though the area lakes have been high, he said they have not reached the same flood levels seen in 2016.