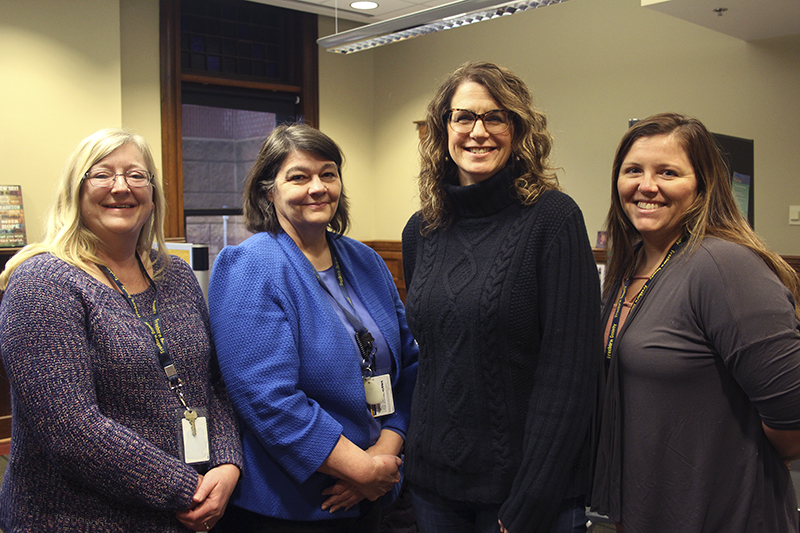 The Crime Victims Crisis Center has already stocked up on colored lights.

Social work advocates Heather Butler, Andrea Mauer and Kim Tiegs and Crime Victims Crisis Center supervisor Maureen Williams-Zelenak are gearing up for the third annual Paint the Town Purple initiative, which asks community members to embrace the color purple for the month of October and to take a stand against domestic violence.

Downtown businesses participated for a second year, stringing up purple lights in their display windows.

“It really has a presence when you drive downtown at night,” Williams-Zelenak said.

In 2018, more businesses joined in and community residents were also encouraged to put up purple yard signs with the event’s flyer printed on them and the words, “Shine a purple light on domestic violence.”

The increase in community participation was purposeful.

“It was targeted and intentional,” Butler said. “We want it to get bigger every year.”

The Crime Victims Crisis Center plans to do more of the same in 2019, but to reach further into the community Mauer said.

Still, the community response was “bigger than expected,” Mauer said. The group ordered 100 yard signs and gave away 96. The other four were on display in the CVCC office.

Additionally, the organization gave away 104 purple light bulbs for community members to install in their front porch lights and 20 more string lights to businesses.

“I think, really, word got out,” Tiegs said.

The supplies didn’t all come in tie, so the group was scrambling to get everything out to the community, Butler said. Those who participated in previous years kept their string lights for this year.

By December, they had already put in the order for this October.

Previously, the Crime Victims Crisis Center hosted a candlelight vigil, but Mauer said it became noticeable that the event was reaching the same audience. The purpose of Paint the Town Purple is awareness, so the team wanted to engage with people who wouldn’t normally participate, Butler said.

“I have campaign signs in my yard,” Butler said. “There’s a lot of people that do. Well, wouldn’t they have be in support of domestic violence awareness, too? If they’re willing to throw a political sign in their yard, wouldn’t they have one of those?”

“I think it starts a conversation that the community doesn’t typically have,” she said.

Tiegs said she also felt the lights and signs made people feel more proactive. When people have that feeling — that feeling they’re doing something — they are more apt to pay attention to the problem, she said.

“I still have a couple (signs) in my neighborhood,” Williams-Zelenak said in December. As of then, she thought they might be frozen in place.

The year 2018 was also the first year for a poker tournament at the Eagles Club, organized by Crime Victims Crisis Center board member Jeff Strom, Butler said. That also brought new people to the table for a conversation on domestic violence.

“It was a fun event … but then it also gave us an opportunity to promote what we were doing,” she said.

Plymouth Shoe Store owner Linda Knudsen put up lights in the store’s display windows in both 2017 and 2018.

“I just think it’s an important issue to give it awareness,” she said.

She strung the purple lights around shoes in the display and hung a Paint the Town Purple flyer in the window. The lights ran around the front windows and toward the slightly inset front door.

“It almost looked like a purple runway,” she said.

Butler said the Crime Victims Crisis Center is appreciative of all the people who helped make the month what it was.

“I think it’s a great way to bring awareness to things,” Knudsen said. “… I will continue to do it in the future as long as they do it.”