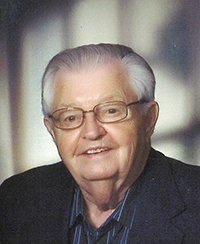 Louis was one of two children born to Louis and Pearl (Young) Mucha in Albert Lea. He was born Nov. 18, 1930, and attended schools in Albert Lea and later in Freeborn, where he graduated from high school.

He served in the United States Air Force, Air Materiel Command, from 1950 through 1954. Upon discharge from the service, he went to work in the special services department of Northern Pacific Railroad in Minneapolis.

He was preceded in death by his parents; wife, Barbara; and brother, Donald Charles Mucha.

There will be a funeral mass at 2:30 p.m. March 19 at Nativity Catholic Church in Fargo. Visitation will be one hour prior to the service. Burial will be at Fort Snelling National Cemetery in Minneapolis.

Arrangements are entrusted to the care of Boulger Funeral Home and Celebration of Life Center in Fargo. To sign the online guestbook, visit www.boulgerfuneralhome.com.