Lucile H. (Ehlert) Anderson, 102, beloved mother, grandmother, great-grandmother and friend, of Wells, formerly of Kiester, passed away Tuesday, March 26, 2019. A funeral service will be at 10:30 a.m. Friday at Open Doors United Methodist Church in Kiester. The Revs. Chris Leistra and  Steven Lorenz will officiate. Visitation will be from 5 to 7 p.m. Thursday at Bruss-Heitner Funeral Home and will continue one hour prior to the service Friday. Interment will be in Fairview Cemetery in rural Kiester following the service. Bruss-Heitner Funeral Home in Wells is assisting the family. To leave an online condolence, visit www.brussheitner.com. 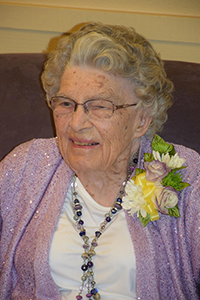 Lucile was born Sept. 12, 1916, the daughter of Clarence and Lillian (Gruhlke) Ehlert in Roseauw County. She attended school in Faribault County and was a 1933 graduate of Blue Earth High School and Mankato Teachers Training in 1934. Lucile enjoyed teaching in rural schools in Faribault County.

Lucile was united in marriage to Howard Anderson on March 29, 1942, in Brush Creek. During World War II, while Howard was stationed overseas, Lucile worked in Albert Lea welding camp stoves. The couple operated a farm in Winnebago County, Iowa. Their family included one son and two daughters.

Lucile was an active member at Grace United Methodist Church in Kiester. She was a Sunday school teacher, served on several committees, member of UMW and the Ruth circle. Other favorite activities of Lucile’s included playing the piano, playing cards, puzzles, reading, baking, traveling and spending time with her family and friends.

She was preceded in death by her parents; her husband, Howard, in 1987; son, Gary Anderson, in 1988; and one brother and sister-in-law, Darrell and Blanche Ehlert.