Marvine W. Segar, 93, of Wells died Friday, March 15, 2019, at St. John’s Lutheran Community in Albert Lea surrounded by family. A memorial service will be at 11 a.m. Thursday at St. Casimir Catholic Church in Wells with Fr. Matt Fasnacht officiating. Visitation will be from 9:30 to 11 a.m. prior to the service at the church Thursday. Interment will be in St. Casimir Cemetery in Wells in the spring. The family prefers memorials to St. Casimir Cemetery, Wells Public Library or Wells Senior Dining. Bruss-Heitner Funeral Home in Wells is assisting the family. To leave an online condolence, visit www.brussheitner.com. 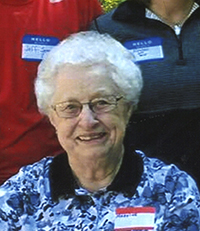 Marvine was born April 5, 1925, in Alden, the daughter of Oscar and Helen Jane (Meyer) Voigt. She attended and graduated from Alden High School in 1943. On Feb. 22, 1945, Marvine was united in marriage to Francis Thomas Segar at St. Casimir Catholic Church in Wells. To this union, six children were born. Francis and Marvine were married for 59 years when Francis preceded her in death in 2004. She worked for 21 years at Parkview Care Center in Wells. Marvine liked to read, garden and spend time with her children, grandchildren and great-grandchildren.

Marvine is preceded in death by her parents; husband, Francis; brothers Mervon, Hilbert and Marlin; and sister, Melva Pierce.