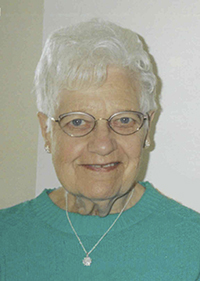 In April 1938, Maxine met Robert Higgins. They were engaged on Christmas Day 1939 and were united in marriage July 13, 1940, in Northwood. To this union two children were born: son, Thomas, and daughter, Carol. Maxine was a loving wife, mother and homemaker. The family took yearly fishing trips up north and traveled to all 50 states, as well as Maxine and Robert traveling to Norway, Sweden and Denmark.

Maxine was a member of St. Olaf Lutheran Church, where she was active in WELCA, Circle 5 and the altar guild. She was also a member of the Hormel Retirees and the Golden Age. She will be dearly missed.

She was preceded in death by her parents George and Cora Runden; husband, Robert, in 2008; son, Thomas Higgins, in 2017; and one brother, Ellsworth Runden.

Funeral services will be at 11 a.m. Tuesday at St. Olaf Lutheran Church in Austin. Visitation will be one hour prior to the service at the church Tuesday. Interment will be in Grandview Cemetery in Austin.

In lieu of flowers, memorials can be directed to St. Olaf Lutheran Church in Austin. Services are pre-arranged and performed by Worlein Funeral Home of Austin. Condolences may be expressed to the family online at www.worlein.com.