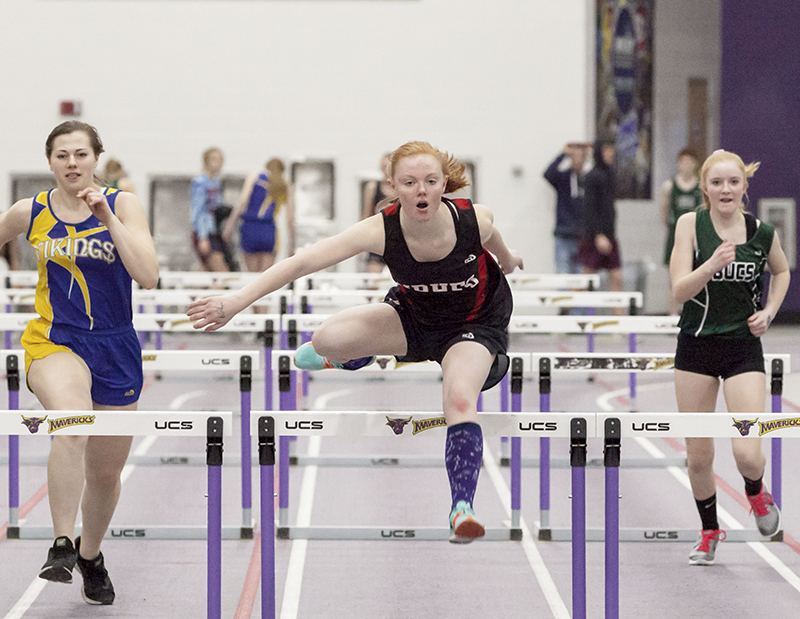 Freshman Natlie Johnson finished in first place in the 55-meter hurdles at the Gopher Conference indoor meet at Minnesota State University-Mankato on Saturday with a time of 10.32. The Panthers finished the meet in third place with 74 points. - Provided

The NRHEG and United South Central/Alden-Conger boys’ and girls’ track and field teams got their regular seasons started Saturday with the Gopher Conference indoor meet on the campus of Minnesota State University-Mankato.

In the boys’ meet, the Panthers dominated the competition — taking first place with 152 points, while the Rebels finished in sixth with 28 points.

The Panthers took home first place in eight events with junior Lonnie Wilson winning both the 200-meter and 400-meter dashes with times of 25.59 and 55.97, respectively. Sophomore Daniel Nydegger controlled the long distance runs with first-place finishes in the 800-meter and 1,600-meter runs with times of 2:18 and 5:16, respectively. Nydegger picked up his third first-place medal in the 4×400-meter relay along with juniors Mason Ferber and Agro Gushwa and sophomore Teddy Gushwa, winning with a time of 3:54.01. 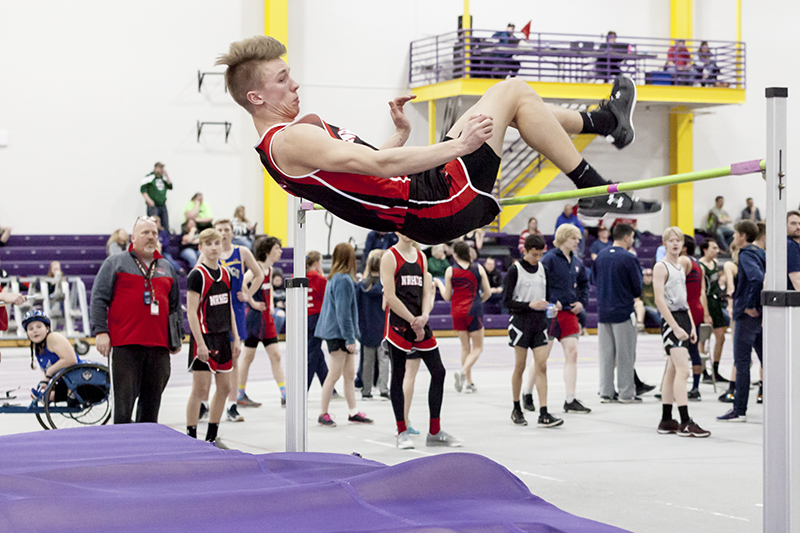 NRHEG senior Brady Agrimson clears the bar during his high jump attempt Saturday at the Gopher Conference indoor meet. Agrimson won the event with a jump of 5’6”, while also winning the 55-meter hurdles and 60-meter hurdles with times of 8.33 and 8.36, respectively. – Provided

“Our boys looked very good (Saturday) winning the Gopher Conference Indoor,” said head coach Duey Ferber. “This is a good benchmark to start the season, we have improvements to make, but we are off to a good start.”

Sophomore Isaac Burgett was the sole second-place winner for the Rebels with a time of 25.76 in the 200-meter dash.

On the girls’ side, NRHEG ended the meet tied for third place with Hayfield at 74 points, only 2.5 points away from meet-winner Maple River. United South Central/Alden-Conger came in sixth with 47 points.

“Girls had a great day, finishing 2.5 pts out of first place,” Ferber said. “Our new seventh-grader Evelyn Nydegger had a great day winning the 400-meter and looking good in her other events. Natalie Johnson looked strong in the hurdles and Caitlin Goette looks to be our strongest sprinter with a nice second-place finish in the 200.”

The Rebels had one runner finish in the top three of an event. Seventh-grader Kyllah Curry won the 200-meter dash with a time of 29.04.

The Rebels continue their season with a meet scheduled for Friday at St. Charles High School. The Panthers will host their next meet April 2. 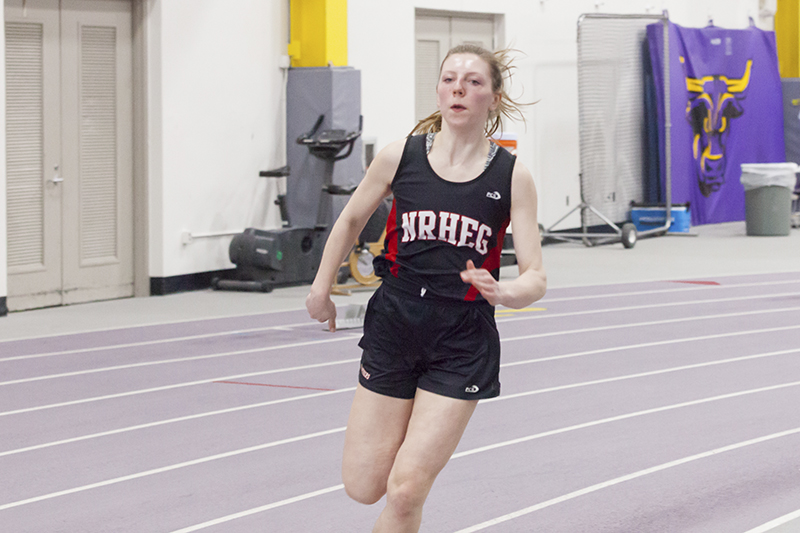 NRHEG senior Caitlin Goette took sprints to the finish in the 200-meter dash Saturday. Goette finished in second place with a time of 30.5. – Provided