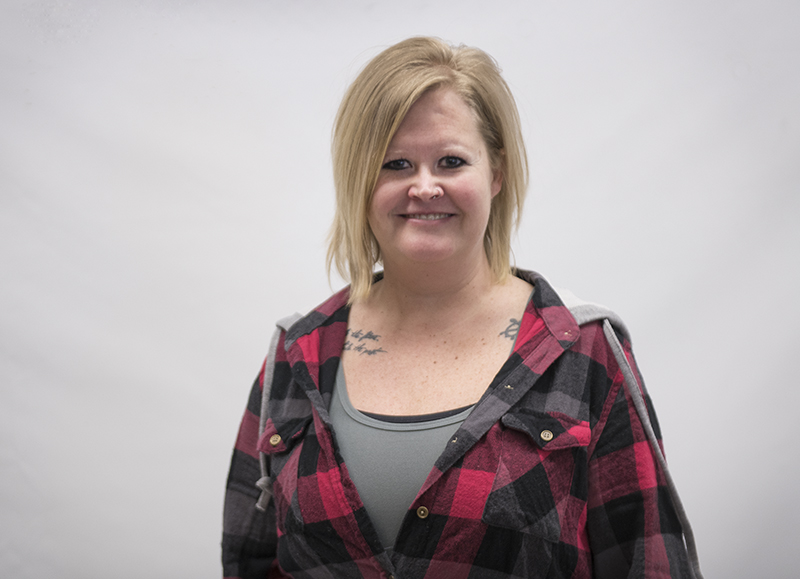 Angie Stendel has been a bail bond agent for four years, three of them with 1st Call Bail Bonds. - Colleen Harrison/Albert Lea Tribune

Albert Lean enjoys independence that comes with the job

Albert Lean Angie Stendel does not have the average 9-to-5 job, and she is OK with that.

Stendel, 40, is a bail bond agent with 1st Call Bail Bonds. While the 1st Call Bail Bonds office is in Owatonna, its agents are licensed to cover all of Minnesota. Stendel said she tends to cover the southern part of the state in general, and typically works from Albert Lea for the most part.

She works out of her home, with a schedule that is pretty flexible, even though she is on-call 24 hours a day. If she goes out of town or is sick, she lets her boss, Jason Biesterfeld — who co-owns 1st Call Bail Bonds with his wife, Brenda — know so he or someone else can take any work calls or cases.

The frequency of issuing bail bonds goes in waves, Stendel said. There tends to be a spike around holidays, as people want their loved ones home; she has also noticed a spike around tax return time and in the summer months. Winter tends to be slower, she said.

Stendel said those unfamiliar with the bail or court system do not always understand how her job works.

When someone goes to court and has bail set for them by a judge, if they wish to get out of jail before their next court appearance they can either pay the jail the entire set bail, or they can pay 10 percent to a bail bond agency. In order to get a bail bond, that individual would need a cosigner — someone with a job who is not in jail and does not have any pending court cases.

The cosigner enters a contract with the bonding agency, and is then financially responsible if the defendant out on a bail bond doesn’t show up for their next court date. If the defendant doesn’t show for court, the agency has 90 days to find them and get them to court. If they do not show within the 90 days, the entire bond is forfeited and the cosigner would then need to pay the entire bond to the bonding agency.

Typically, Stendel said people who miss court dates do so by mistake. They usually move or do not keep the same phone number, so they tend to miss any reminders sent out. Once she catches up with them, they tend to turn themselves into the courts, Stendel said. On occasions where they are trying to run, though, Stendel said the agency will sometimes collaborate with other fugitive agencies depending on where they think someone might be. In situations where Stendel has tracked someone down herself, she said she notifies law enforcement and waits for them before approaching any location in which she suspects a defendant may be hiding. She said this saves her a step while also adding another level of security.

While no-shows are usually mistakes, Stendel said bail bond agents make sure both the defendant and cosigner understand their responsibilities and what is expected of them, using language they’ll understand — since contracts can include legal jargon. When the no-shows are intentional, though, and a bench warrant is issued, defendants sometimes try to say they did not realize what the requirements were of being out on a bail bond.

“A lot of times they say they didn’t know, but they’re always informed,” she said.

Interesting fact: Stendel and her husband were married during a Saving Abel concert