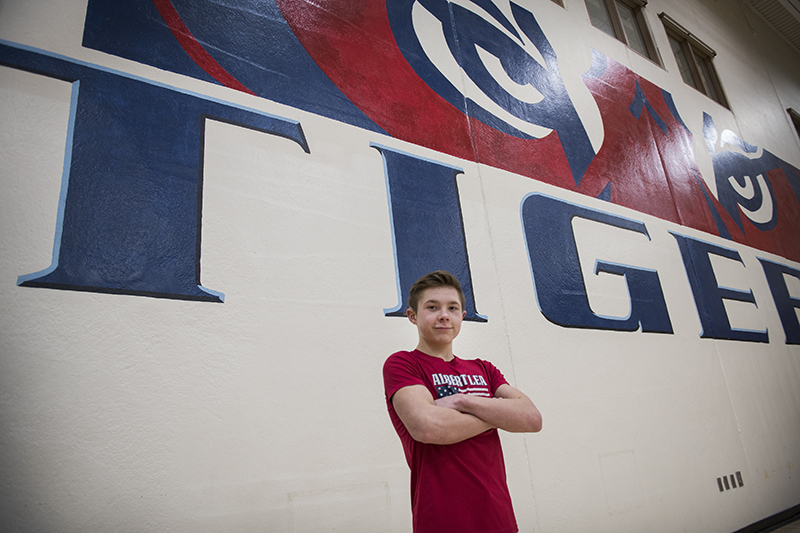 Triton Cox, an Albert Lea sixth-grader, is making history in the youth wrestling ranks. Sitting at 36-0 on the season with 32 pins, three technical falls and one major decision, he is set to be the only Albert Lea wrestler to be inducted into the Midwest Wrestling Tour Hall of Fame.

While all the success he has experienced this season is worthy of acclaim on its own, Cox has done it all while being completely deaf on the mat.

To qualify for the Hall of Fame, wrestlers must wrestle and place first in four separate national tournaments within the Midwest Wrestling Tour. Most recently, Cox took first place at the individual regions tournament in the 130-pound class of the fifth- and sixth-grade division, pinning all three of his opponents.

Starting his wrestling career about four years ago, Cox said his favorite part about wrestling is that is takes both physical and mental strength to be good at it. He said sometimes the practices can be hard, but it’s all worth it in the end.

“At practice, when I work really hard, I get very tired,” he said. “But when I win tournaments — the state tournaments — I’m always happy.”

Cox has cochlear implants when off the mat, which allow him to hear about 85 percent within a 3- to 5-foot range. However, on the mat, when the implants come off, he is completely deaf.

While not being able to hear coaches on the mat could be a hindrance at times, he has the perfect coach to help get him through it.

Kristopher Cox, Triton’s Cox’s father, is always in his son’s corner of the mat helping to guide him through his matches.

“I’m usually at the corner demonstrating the moves as opposed to yelling,” Kristopher Cox said. “It can be frustrating at times, wishing he would look over and see what you wanted him to do. But he’s pretty good at picking and choosing the right times to look when he won’t be giving up an advantage to the opponent.”

Even with all the accomplishments as a youth wrestler, Triton Cox said he is excited to get started at the varsity level, where his ultimate goal is to win a Minnesota state championship. He’s not the only one highly anticipating his move up the ranks.

“Triton has really made an impact for both our kindergarten-sixth youth team and our junior high wrestling team,” said Albert Lea head wrestling coach Paul Durbahn. “He’s a hard worker and has a high ceiling, very talented and explosive on the wrestling mat. He’s fun to watch. We’ll be excited when he’s old enough to wrestle in the high school room.”

Up next is the Northland Youth Wrestling Association state tournament April 4-7 at Mayo Civic Center in Rochester, where Cox will compete as a member of the K-6 team, the seventh-eighth grade team and individually.

Kristopher Cox described how he feels when coaching Triton Cox and his brother, Kris, through their youth.

“It’s been really awesome, I really enjoy it,” he said. “I grew up wrestling in a big wrestling family, and it’s been a passion of mine and seeing them grow up into it and grab onto that passion themselves, it brings a whole new excitement. Watching them grow into great wrestlers and the accomplishments they get, I get excited right along with them.”

Interesting fact: Triton wants to be a carpenter/architect when he gets older and enjoys designing homes in his free time