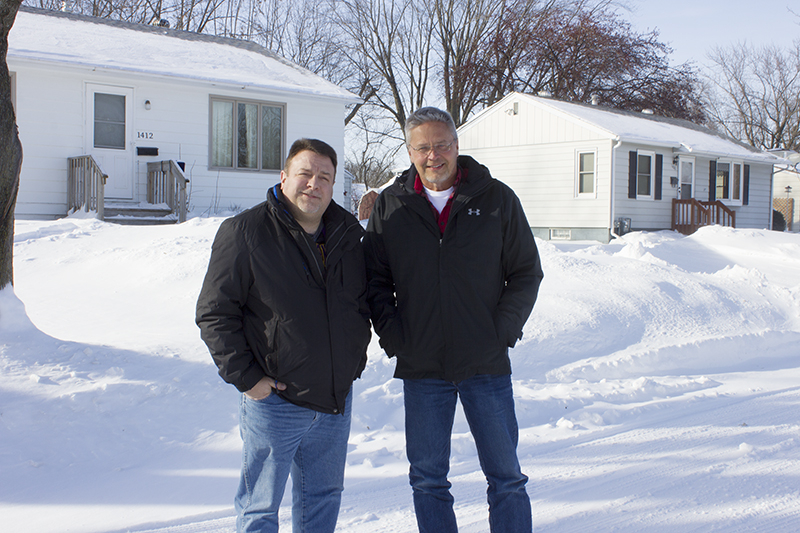 The Rev. Matt Hundley of Albert Lea Vineyard Church and Jim Troe, both organizers of Shinefest Week of Service, say their Christian faith plays an important role in their work. The two men are shown Feb. 1 near Memorial Park, the area where they helped repair homes last year. — Sam Wilmes/Albert Lea Tribune

For one group of local organizers, being a Christian is not something they keep inside church walls.

The Shinefest Week of Service has recently taken place in May and has included work on Albert Lea areas including Hawthorne Elementary School, the west side of Albert Lea, around Lakeview School and Academy Park.

Shinefest used to include more outreach to local schools. Each church would rally a group around a school.

“Working with the schools was great, but we were going to be moving from August to May, and so there weren’t many school projects going on in May,” said organizer Jim Troe. “So we kind of have moved more intentionally into the neighborhoods to try and really administer to our neighbors directly.”

The service week last year included cleaning gutters, removing garbage and painting in the Memorial Park area, helping people who could not do the work themselves or afford to hire help.

Volunteers have conducted repairs on between 20 to 30 homes in the last few years.

“We try to find neighborhoods that need some help but are pretty heavily owner-occupied,” Troe said.

Organizers discuss whether they want to hold the event every year.

“We prefer to keep doing the things that God’s doing so that we’re not coming up with our own stuff,” said the Rev. Matt Hundley of Albert Lea Vineyard Church. “To this point we still feel like God’s doing this.”

He noted the Bible stating Jesus Christ came to serve, not be served, as a motivation for the week of service.

“We’re taking time from our own lives to invest in serving our neighbors, and so, for me, that’s kind of the basis of Shinefest,” Hundley said. “It’s a way to kind of live out Jesus’ life message, just in reality, with nothing expected back from the community. We’re not looking for a pat on the back, or anything like that. We’re just looking to show people love and serve them in Jesus’ name.”

Hundley and Troe said they want to someday pass on organizing activities to younger people.  “This is something that the Lord is in,” Hundley said. “And so how you have it outlive your lifetime is you have to continue to hand it off to the next people to run with it.”

Hundley said there is a “major need for rehabilitation in homes” in Albert Lea.

“There’s a good percentage of the population that are living in homes that have things here or there that need to be addressed,” he said. “They just don’t have either the funds or the expertise.”

This year’s week of service will include an area from Spark Avenue to Plainview Lane and Fourth Avenue to Front Street.

Hundley encouraged homeowners in the area to watch for letters noting the service week in April.

“We would love to serve,” he said. “We don’t have any hidden agenda other than being good neighbors and sharing Jesus’ love.”