Sport brings mom, daughter closer on and off court 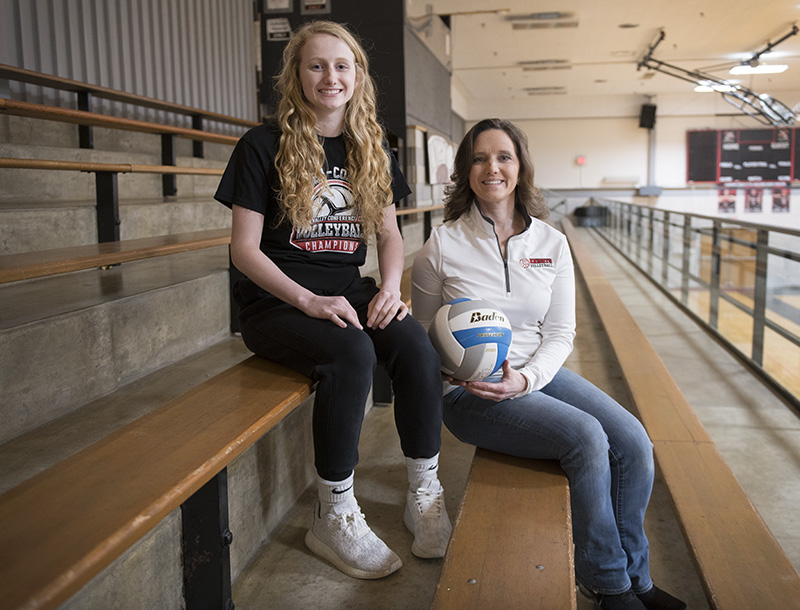 Erika Bute finished her last season of playing Alden-Conger varsity volleyball in the fall. She has played on the varsity team — which is coached by her mother, Jolene — since she was in seventh grade. Colleen Harrison/Albert Lea Tribune

For many parents with children involved in high school sports, watching from the stands as their children grow both as a player and a person on and off the court is a tremendously rewarding experience. The connection between a parent and child through sports is a strong bond.

However, for Jolene and Erika Bute, that connection runs a little deeper. Now a senior at Alden-Conger High School, Erika Bute has started for six years on the varsity volleyball squad with her mom, Jolene Bute, as her head coach.

Ever since she was 9 years old, Erika Bute has played competitive volleyball, and even before then she would attend her mom’s varsity practices to watch and learn. As a 9-year-old, Erika Bute made the 11’s junior olympic team, starting her young career as a standout volleyball player. She has continued playing on junior olympic teams since, including a national title with the Northern Lights team in 2018.

She started playing for Alden-Conger in seventh-grade and was immediately pulled up to the varsity roster — but not by Jolene Bute.

“I actually had a group of coaches and former players choose my team that year because I did not want to be apart of the process of tryouts when I had my own kid playing.,” Jolene Bute said. “It was unanimous that she was ready for varsity, and I fought it for awhile until the senior hitters of that class asked if she could be the setter.” 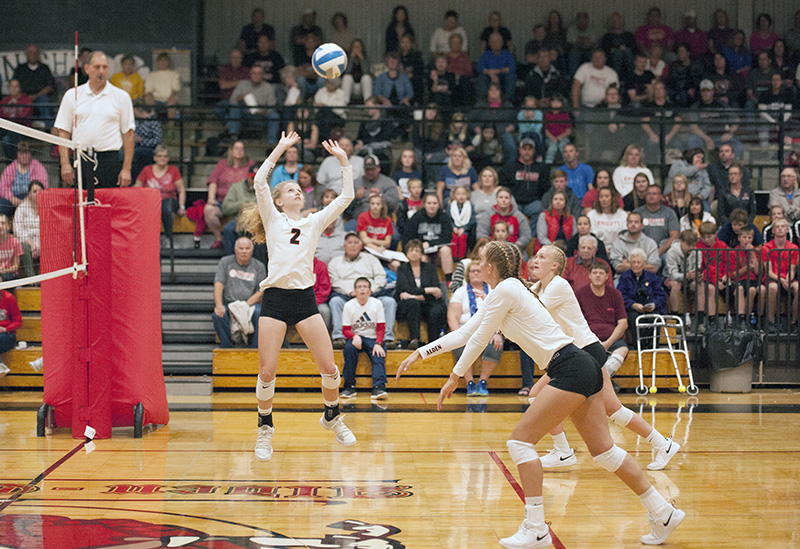 Erika Bute sets the ball to one of her teammates in a September 2018 game against St. Clair. Tyler Julson/Albert Lea Tribune

Jolene Bute said the hardest part about coaching her daughter was trying to avoid people thinking that she was favoring her in any way. Not wanting to throw off the team chemistry and wanting her to be like any other player on the team, she would consciously not compliment and would be harder on her than any of the other players.

For Erika Bute, the naysayers were also challenging in the beginning, but the hardest part for her was distinguishing her mom’s two roles.

“The most challenging part was separating her from my mom and my coach, either in the gym or at home,” Erika Bute said. “It was also challenging to have others make comments like ‘you only get to play because your mom is the coach,’ but I learned to tune them out.”

Not only did Erika tune them out, she proved them wrong with her play on the court as well. She was an instant success and has accumulated some impressive stats through her time in high school. After completing her senior year, Erika recorded over 1,000 digs and over 2,000 assists. She has also signed on to continue her volleyball career in college at Augustana University.

Both mother and daughter agreed some of their favorite memories from their time together in the program were when they would travel to other games and scout the competition, bouncing ideas and game plans off one another.

Even after her high school career has ended, Erika Bute said volleyball is still a topic of conversation nearly every day at their house. 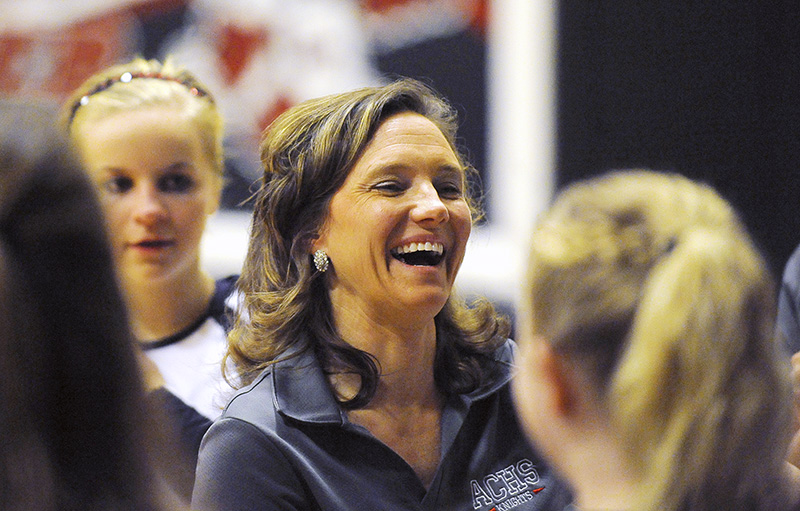 Alden-Conger coach Jolene Bute talks to her team during a timeout in the first round of the Subsection 2A South tournament against Truman in October 2014. Bute said she has coached her daughter, Erika, for about eight years off and on, including Erika Bute’s six-year varsity career. – Micah Bader/Albert Lea Tribune

Even though Erika Bute is done with her high school playing career, Jolene Bute still plans to continue coaching and raising the standard for the Alden-Conger volleyball program. She said the program has gotten better and better over the past years and as long as players continue to work hard and improve, she wants to be a part of that. However, she said losing her daughter is going to be an adjustment for her.

“It is going to be really hard to lose my ‘coach on the court’ and my best friend going to all of the games together that we have,” Jolene Bute said. “But I am really excited for Erika and the next chapter in her volleyball career to play college volleyball. We have been to many, many college games together. The hard work that she has put in so far and the sacrifices she has made to be the player she is today are incredible.”

Although challenging at times for both of them, having each other on the sidelines and the shared experiences are some things they won’t soon forget.

“Having my mom as my varsity coach was very challenging, but also something I wouldn’t have traded for anything,” Erika Bute said. “I loved being able to share some of my best high school memories with her.”