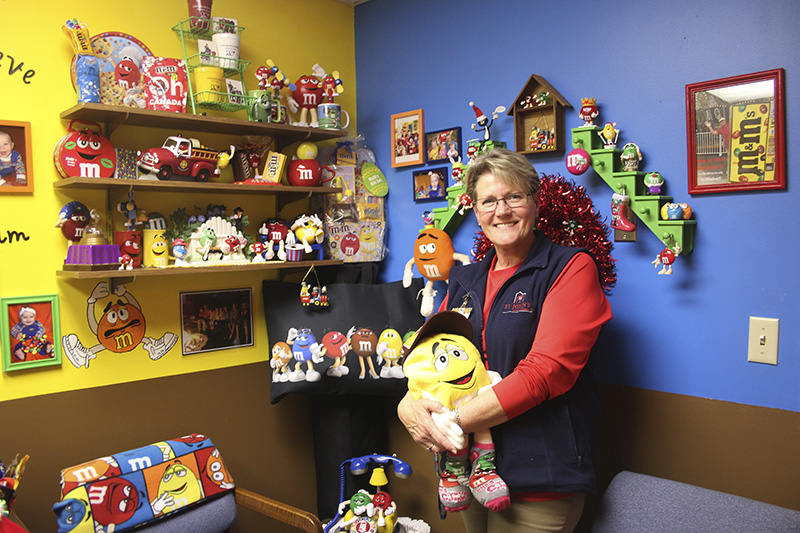 Wanda Wangsness has worked at St. John's for 41 years. Though she is currently the materials manager, she started as a CNA when she was a high school senior, expecting to stay six months. Sarah Kocher/Albert Lea Tribune 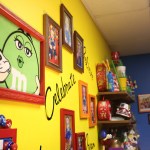 About once a week, M&M’s memorabilia shows up on Wanda Wangsness’s desk, she said. While she framed the M&M’s fabric here and also put up the photos of her children, she estimates a large portion of what’s in her office was gifted to her. Sarah Kocher/Albert Lea Tribune 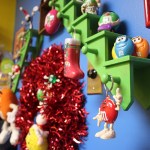 This keychain is likely Wanda Wangsness’s oldest piece of M&M’s memorabilia, though it is just one of hundreds of pieces in her office. Sarah Kocher/Albert Lea Tribune 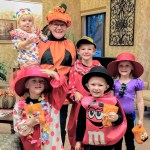 Wanda Wangsness brings her grandchildren to St. John’s to celebrate holidays with the residents. Provided 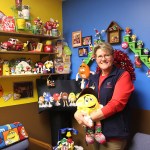 Wanda Wangsness has worked at St. John’s for 41 years. Though she is currently the materials manager, she started as a CNA when she was a high school senior, expecting to stay six months. Sarah Kocher/Albert Lea Tribune

At least, that’s what high school senior Wangsness expected when she took a CNA position at St. John’s Lutheran Community at Luther Place. Her plan was to stay six months.

“I needed gas money,” she said.

“They raised me,” Wangsness said.

“Her residents are always first in her life when she comes to this job,” said Diane Wichmann, who has known Wangsness for 25 years.

Some of this work she does from her office at Luther Place. Each wall begins with a brown base, then part way up transitions cleanly to a different color. Wangsness painted them blue, orange, yellow and red in her off time, freehanding M&M’s men on the road to Vegas in the corner behind her desk. Below that 2D representation is the real deal: a 2-foot tall, red, saluting M&M’s man wearing a sombrero.

For her 40th anniversary of working at St. John’s — she’s at 41 years now — Wangsness ordered 200 cake donuts with frosting and mini M&M’s as sprinkles.

“Anything with an M&M’s on it anywhere, they assume it’s from me,” Wangsness said (even when she’s not responsible for it).

It seems with good reason: Almost anything that could be turned into M&M’s memorabilia has a home in Wangsness’ office. Every year, her grandchildren make her M&M’s things for the Freeborn County Fair. Her blinds have valances with a hodgepodge of M&M’s men on them. Wangsness made them out of a throw blanket. A plush yellow M&M’s joins visitors on a chair in front of her desk, and on a large lace doily rests a push-button phone — modeled in the style of a rotary with a bright blue receiver — its buttons a rainbow of M&M’s lookalike pieces. Above the phone and chair, a trio of shelves are stuffed with M-blazoned collectibles: a fire truck, a cookie tin, several mugs, a bag of Canadian-themed M&M’s and a porcelain flower-holder overflowing with silk ivy leaves and blue and pink flowers. On it, the green and red M&M’s sit together on a bench in front of a white picket fence. Below the bottom shelf, a painted orange M&M’s on the wall, his sneakers untied, hangs on tight to the bottom bracket of the shelf, looking worried. And from Wangsness’ right pocket, an M&M’s lanyard spills out.

On Wangsness’ desk is a small gumball machine look-alike that dispenses M&M’s.

She started her position as materials manager around Christmas and noticed other co-workers had candy in their offices around the holidays.

Wangsness goes further than that now, Wichmann said. At Christmas and Easter, Wangsness makes M&M’s packets for her co-workers and passes them out.

“She’s a real spark plug for us,” Wichmann said.

This Christmas, Wangsness treated others to a Hershey’s bar snowman, wrapped in white paper, decorated with M&M’s-colored buttons and sporting an M&M’s fabric hat. Others may have received an M&M’s Christmas poem with a fun-size packet of M&M’s stapled on.

After working as a CNA for five years and in activities for 23, Wangsness changed to her current position. It was the same staff and residents she loves, but a new role.

“I thought, ‘Let’s broaden your horizons,’” she said.

Wangsness said when she took the position as materials manager, a co-worker said, “Oh, you’re the new M and M in town.”

“It just took off from there,” Wangsness said.

Most of what’s in her office are gifts from others, starting with a Las Vegas-themed M&M’s frame given to her by her daughter-in-law, now filled with an image of Wangsness at the Las Vegas M&M’s World.

At home, she has two M&M’s couch throws and nothing else themed. In her office, it’s like the Albert Lea hub of a Mars Inc. museum display.

“I guess I thought, ‘This is something so out of the box … let’s just run with it,” Wangsness said.

Her collection is only growing. Wangsness said coming into her office sometimes makes her feel like she’s surrounded by elves. M&M’s merchandise is left on her desk, often without a clue as to who left it.

“Once a week there’s something sitting there,” Wangsness said.

And now, she has made her own mantra of gratefulness out of it all. M&M isn’t just materials manager anymore; now, it’s also “much and many thanks.” For example, when she thanks staff as part of the safety committee, it might be, “Much and many thanks for working safely.”

While it’s hard to miss for anyone who walks into her office, M&M’s aren’t what Wangsness has a reputation for at St. John’s, resident Jeanne Wendell said.

“She doesn’t need that for her reputation,” she said. “She’s good. She’s sweet. She’s like a candy.”

“She’s got two good listening ears and she never says anything to you unless she’s thought of how to say it,” Wendell said.

Wangsness can figure out, without you telling her, whether you’re doing well or not.

“She never questioned anything on the amount of time she spent … with a person,” Wendell said.

She’s also a woman Wendell knows as good with adults but who truly loves children. Both Wendell and Wichmann said during Wangsness’ time off, she will bring her grandchildren in to spend time with the residents.

“We’ve just adopted all the grandmas and grandpas in here,” Wangsness said. She didn’t know her own grandparents well, so she speculated that may be why she puts effort into caring for residents with her own grandchildren. “… They come here from the time they can waddle.”

Wangsness is “Bumma” to nine grandchildren, whom she brings in to pass out treats for every holiday.

“Any time that there is a reason we can come and put a funny hat on, I gather as many as I can … and we put something on our head, or a whole complete costume, and up and down the halls we go,” Wangsness said.

Often, they’ll bring in suckers: They have a stick for residents to grab and to prevent choking, and they can be small enough for those with diabetes to still consume some of. When her grandchildren walk down the hall, she said, they pass out suckers. When they walk back down, the residents tip their suckers to the children, and the children tip their suckers back in a sort of sugary salute.

“We have so much fun together,” Wangsness said.

When she brings her grandchildren to St. John’s, it looks different from when she came herself as a child at 5 years old to visit her great-grandmother. She was always told to behave — to be quiet.

Now, they sing everywhere they go during their informal family parade through the facility, Wangsness said.

“They know how much fun you can have, even if you’re old,” she said. “… They understand love and compassion and giving to someone else that can’t pay you back. And I think that’s one of the biggest things I want to instill in them. And if I’m lucky enough to live long enough to end up in a care center, I would like them to bring their kids and sing and be loud and give me chocolate when I’m not supposed to have it. I want them to help me grow old in a fun way, just like I want them to help all these people that live here.”

Wangsness said she wants to stay at St. John’s as long as she can.

“It felt like family the minute I walked in that door,” Wangsness said. “And it still feels like family.”

She started for gas money, but she stayed because she found her passion, she said.

“I just felt a calling,” Wangsness said. “I wanted to make life the best it could be. You don’t come to a nursing home to add years to your life. When you come here, I want to add life to your years. And the more fun and the more loving and the more connected you are through your grandchildren or through M&M’s or through I don’t know, it’s just terribly important to me.”

She’s doing so through the three things Wangsness holds to be universally effective.

“There’s three things in my 41 years here, three things that absolutely spark life and happiness with these people, and it’s puppies and children and M&M’s,” Wangsness said. “If you can produce one of those three or all of them together, we are giving our residents a wonderful day.”

3 – Positions Wanda Wangsness has had with St. John’s, and also the number of warehouses she manages as
materials manager

9 – Grandchildren Wangsness has. She brings some to St. John’s every
holiday to visit, dress up and pass out candy 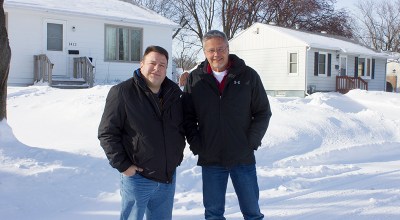 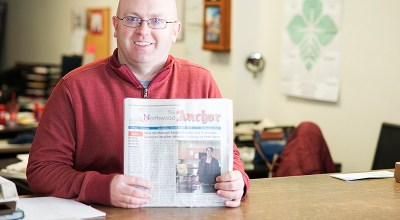 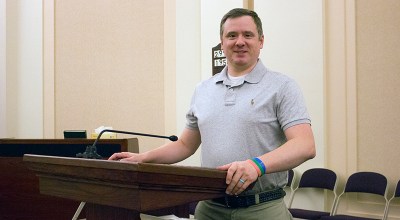