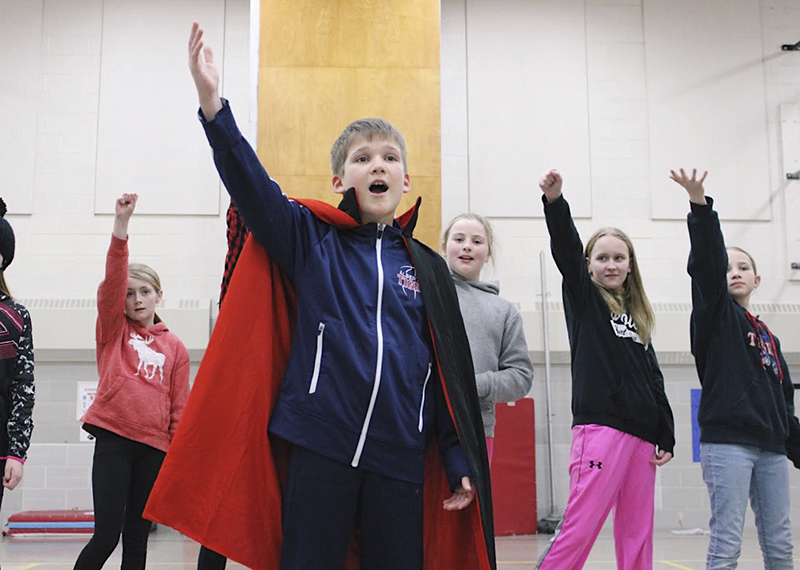 Brodie Rassler, center, and other Sibley Elementary fifth-graders practice for their upcoming musical, "We are Monsters." The performance will be at 7 p.m. March 5 in the Albert Lea High School auditorium. All third-, fourth- and fifth-graders from Sibley are participating in the musical, which is directed by Sibley's music teacher, Mollie Mickelson. Provided

Sibley Elementary School third-, fourth- and fifth-graders will once again present their spring choir performance in musical form, this year opting for the show “We Are Monsters.” They perform for the public at 7 p.m. Tuesday in the Albert Lea High School auditorium.

In “We Are Monsters,” a group of humans who want to learn more about monsters sneak into a monster cabaret filled with werewolves (third- and fourth-graders) and vegetarian vampires (fifth-graders). Along the way, the humans — and monsters — discover more about each other.

“It’s funny, and it’s also something that the third-, fourth- and fifth-graders can relate to: Don’t be afraid to be unique,” Mickelson said.

Last year was Mickelson’s first year leading the Sibley musical after it began as a spring tradition started under a different teacher. She said she decided to do it again after seeing the students have a good experience with it. She also noticed she was looking forward to it, too.

“I decided to stick with this because it’s something that the students last year really connected to and had a lot of fun with,” Mickelson said.

She used this year as an opportunity to teach students not only the music, but also what it means to be in a musical: the structure of it, what it means to get into character and the logistics behind putting one on. Many of the students had never put singing and dancing together before, she said.

“I’ve noticed the students have gained a lot of confidence in performing just throughout the process of learning our songs,” she said.

In addition to performing in ensemble pieces, students could audition for speaking levels and solos. About 35 students have solos or speaking parts in the show, Mickelson said. These students attended after-school practices to learn their parts. The show will come together for an in-house performance for other students in the Sibley Elementary School gym Monday, and then another run-through at the high school on Tuesday.

Wordehoff said she also worked with a few students to construct the door for the monster cabaret entrance as well as a sign for the cabaret. Some fifth-graders helped make notes to go on the door. She said the third- and fourth-grade students enjoyed working on their werewolf ears during art class.

“They think the big signs are amazing — they’re 4-by-8 (feet), so they’re huge — … and then their ears are fun and they have fun making them their own,” she said.

“It’s nice to have, you know, the collaboration between all the specialist areas working together to make the musical a success,” Mickelson said.

It was a collaboration mirrored by students to make the show work, too.

“Most importantly, the students have learned that they have to work together in order for the show to work and really be a success,” she said.