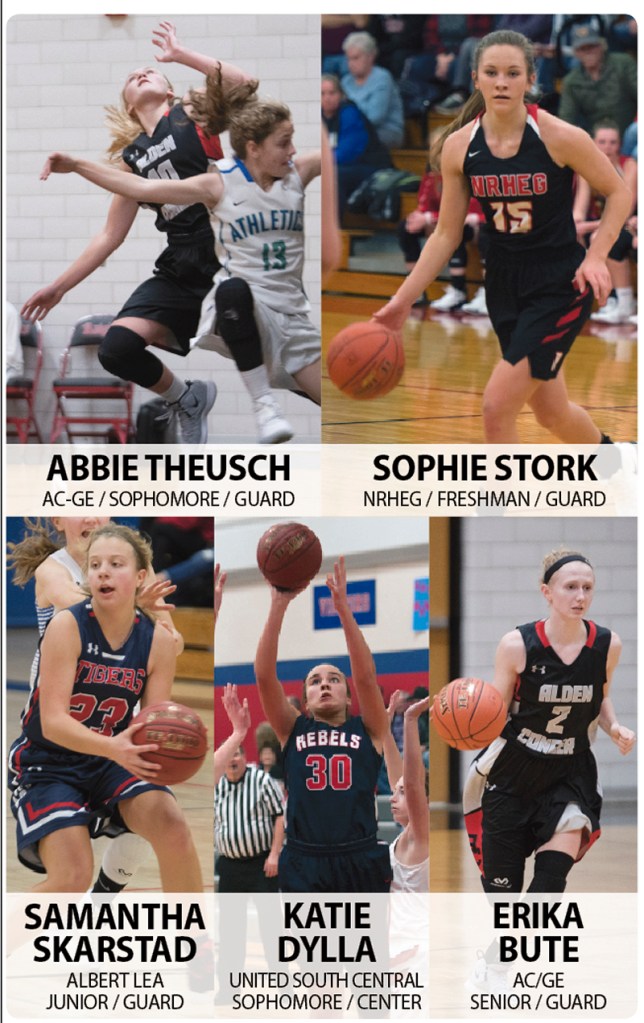 As just a sophomore, Abbie Theusch led the area in scoring with 454 total points, 20.6 per game, shooting 42.7 percent from the field. She also added 134 rebounds, 44 assists and an area-leading 106 steals. In the first year of the cooperation between Alden-Conger and Glenville-Emmons, Theusch helped set the bar for the team in the future. The Knights finished the season with a 13-9 record, better than both teams’ records from the previous season. Despite a first-round exit in the section tournament, Theusch will be a big part of the team’s success moving forward.

Samantha Skarstad led the Tigers in scoring and finished with the area’s third-highest point total with 365, 14.6 points per game. On top of the points, she recorded 148 rebounds and shot an astounding 72.1 percent from the free-throw line. Skarstad was also named to the All-Big Nine Conference first team.

This is the second straight year Skarstad has been a mainstay in the Tigers’ rotation, and will be relied upon to be the leader once again during her senior campaign.

The Tigers faced an early exit in the section playoffs, falling to Northfield in the first round 76-47. They ended their season with a record of 4-21.

As the only freshman to make the first team, Stork was second in the area in scoring with 431 points, 17.2 points per game. She also finished second in rebounding with 189, while also adding 47 assists, 30 steals and 25 blocks.

The Panthers lost in a first-round section game to Medford, and finished the season with a record of 9-18. Stork will be a big part of the Panthers’ future, leading a young core of players after graduating six seniors from this year’s squad.

Dylla makes the All-Area first team for the second consecutive year, scoring 300 points throughout the season, 12 points per game. She is also the only player in the area to average a double-double throughout the season (12, 10.8). Dylla recorded high games of 22, 18 and two 17-point games, while also leading the Gopher Conference in rebounding.

The Rebels fell to Springfield in the first round of the Section 2A tournament, ending their season with a record of 3-22. Dylla will look to continue her stellar play in her junior year as the Rebels work to raise the bar next season.

As the sole senior to make the first team, Bute is no stranger to the All-Area teams. In her senior season, Bute totaled 339 points (18.1 ppg) taking fourth in the area standings. She also pulled in 163 rebounds, dished out 81 assists, recorded 67 steals and shot an area-leading 73 percent from the free-throw line.

A member of the All-Area first team each year since her freshman season, Bute will surely leave the team as one of the best athletes to play for Alden-Conger.

Jeffrey had an impressive freshman season, totaling 300 points and 108 rebounds while shooting 38.4 percent from the field for the Tigers.

Hopperstad scored a total of 200 points throughout her senior year — adding 122 rebounds, 52 assists and 39 steals to her career totals for the Vikings.

As a junior, Gasteiger accumulated 271 points, 71 rebounds, 40 assists and 43 steals for the Bulldogs. She also shot an impressive 36.2 percent from long range and 70.2 percent from the free-throw line.

Schultz led the area in assists with 123 — 40 more than the second-place finisher. She also amassed 269 points, 110 rebounds and 53 steals in her eighth-grade year.