Walz unveils plan for all carbon-free electricity by 2050 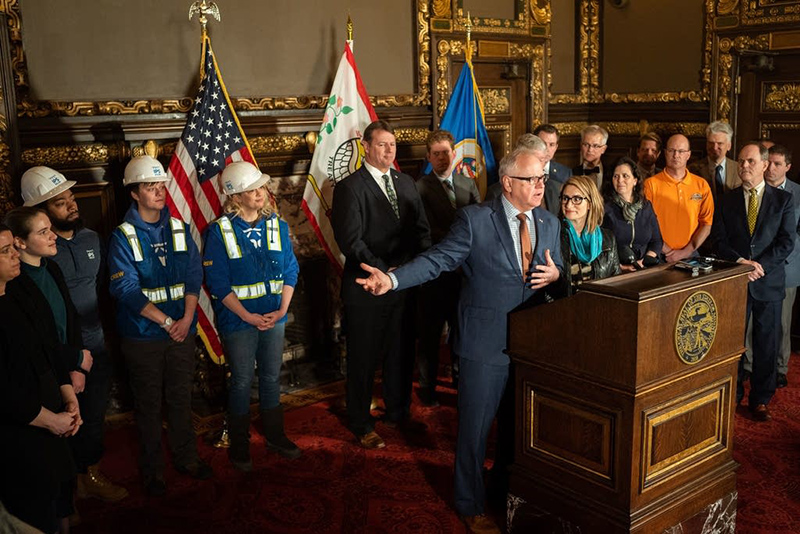 Flanked by energy workers and environmental advocates, Walz said his energy and climate plan is “different” because he worked with utilities to draft it. Walz’s plan allows each electric utility in the state to choose the pace at which it moves from coal toward carbon-free sources like nuclear, solar or wind.

“Climate change is an existential threat. we must take immediate action,” Walz said. “If Washington is not going to lead, Minnesota will lead.”

Xcel Energy, the state’s largest electric utility, has already pledged to make its electricity carbon-free by 2050. The company has said it will lean on nuclear power to reach that goal.

The proposal would bring Minnesota’s energy policy in line with those of California and Hawaii, which both have goals of carbon-free electricity by 2050 or earlier.

The third part of Walz’s proposal would raise efficiency standards for investor-owned electric utilities and help for low-income households to make their homes more energy-efficient.

“Climate change is the No. 1 threat to global public health of the 21st century. Gov. Walz is leading Minnesota to a clean, healthy and equitable future,” Laalitha Surapaneni of Health Professionals for a Healthy Climate said in a statement. “His decision today showed the medical community that he leads with science, cares for the health of Minnesotans and listens to the concerns of his constituents.”

Rep. Chris Swedzinski, R-Ghent, called Walz’s proposal “extreme” and accused the governor of “bending to every demand of environmental activist groups” on certain issues including the Line 3 oil pipeline and energy mandates.

“Governor Walz’s extreme energy proposals would cause Minnesotans’ energy bills to skyrocket, force the closure of reliable and cost-effective power plants, and puts Minnesota all-in on technology that simply cannot provide the reliable power you need to keep the lights on and heat your home in the winter,” Swedzinski, the Republican lead on the House Energy and Climate Finance and Policy Division, said in a statement.

Electricity only one piece of hitting Minn. emissions goals

The 2007 Next Generation Energy Act calls for an 80 percent reduction of greenhouse gas emissions across all sectors in Minnesota.

Laura Bishop, the Minnesota Pollution Control Agency commissioner, said making electricity carbon-free is crucial to hitting those goals, but it’s not everything.

“It’s going to help us,” she said, “but other sectors will have to come on board as well and we’re going to find proper incentives and ways to encourage those things to happen.”

The Legislature would need to pass Walz’s plan before it would become an official state mandate.