National Weather Service issues winter storm watch for much of state; 4 to 8 inches of snow expected in Albert Lea 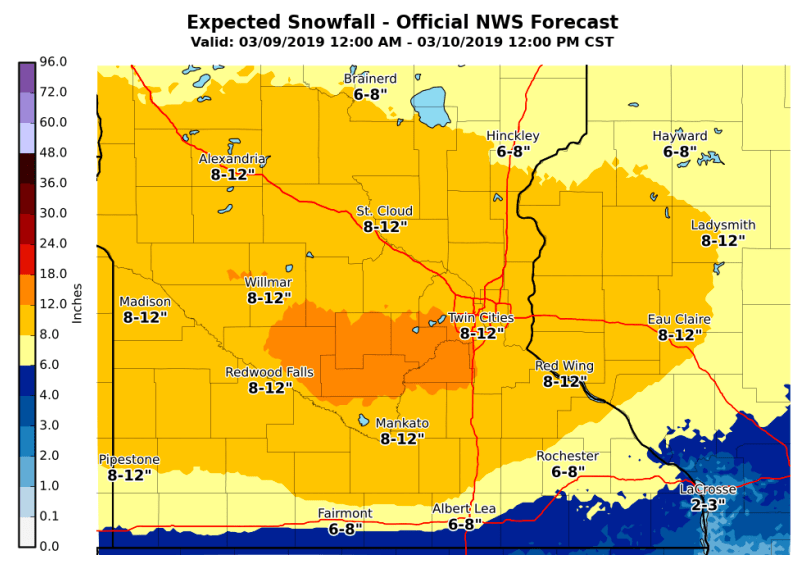 The National Weather Service forecasts Albert Lea to receive 4 to 8 inches of snow in the weekend storm. - Provided

The National Weather Service has issued a winter storm watch for all of central and southern Minnesota from Saturday through Sunday morning.

Heavy snow is expected to develop over the Plains and advance into southern and western Minnesota early Saturday morning, before reaching eastern Minnesota by late morning.

Snow rates of 1 to 2 inches per hour are expected through early evening, before easing Saturday night.

According to the weather agency, snow accumulations of 4 to 8 inches are likely in Albert Lea, along with a light glaze of ice. Some rain or freezing rain could mix with snow at times along Interstate 90 Saturday.

Higher amounts of snow are expected across central Minnesota, including the western parts of the Twin Cities.

The weather agency is warning that the heavy snow will add stress to buildings, which could lead to roof collapses.

The snow will be accompanied by wind gusts up to 40 to 45 mph. This will lead to areas of blowing and drifting snow, but widespread blizzard conditions are not expected.

The winter storm watch is in effect from Saturday morning through Sunday afternoon.