Working to close the gap 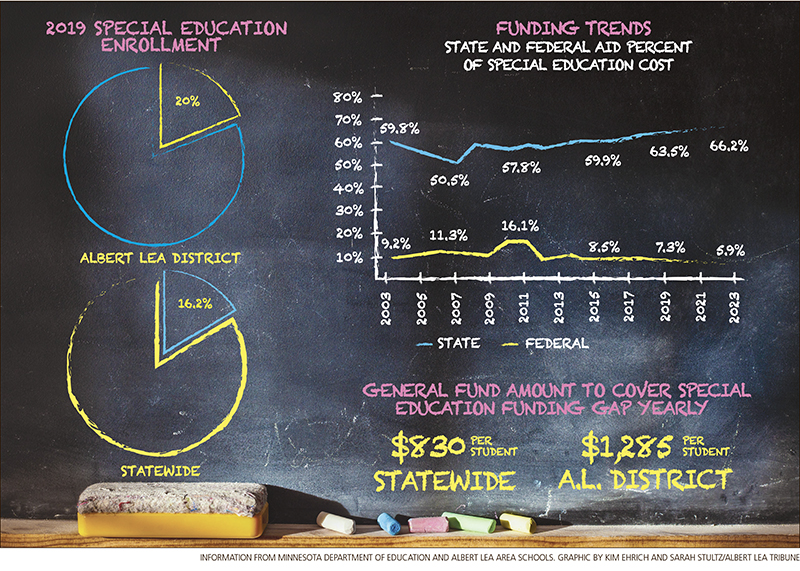 As federal funding for special education continues to fund a smaller-than-expected piece of the pie, the state — and individual districts like Albert Lea Area Schools — find themselves eating the difference.

But according to the Minnesota Department of Education, in 2019, that funding looked less like 40 percent and more like 7.3 percent.

While the Minnesota Legislature pitched in to fund 63.5 percent of costs in 2019, this meant districts funded 29.2 percent of special education costs this fiscal year.

“When we want to do different programming for kids across the continuum, we are limited to what we can do because we are spending so much money meeting the needs of our special education students, so it really limits us as a district as far as providing different types of programming,” Funk said.

Funk also noted the similarity between the cost per student in special education cross-subsidy costs at $1,285 per student and the current operating levy at $1,245 per student.

If the cross-subsidy was reduced, Funk said there would be the potential for a smaller levy and smaller burden on taxpayers. He said he did not know the likelihood of the operating levy decreasing should more special education costs be covered by federal funding.

According to Director of Special Services Tami Alphs, 20 percent of Albert Lea Area Schools students ages birth to 21 — 750 — are enrolled in special education. Statewide, the Minnesota Department of Education said that average is 16.2 percent.

But both in Albert Lea and statewide, those numbers are still rising. In the 2019 fiscal year, 145,442 students ages birth to 21 were enrolled in public special education, according to the Minnesota Department of Education. In 2015, there were 128,983 students.

Volz said the increase in costs for special education is driven by an increase in students with IEPs, or Individual Education Plans.

According to Alphs, that jump has been most pronounced in the past year in what she called the most significant spike she has seen. Numbers for the past five years have remained relatively steady, hovering just under 700 students, this school year, 750 students were placed on IEPs. She said the district had more students qualifying for special education services move into the district this year.

“We are very diligent about the kids that we do evaluation on, and we make sure they do qualify for services,” Alphs said.

Volz said the special education cooperative with Austin is one way the district has worked to cut special education costs by providing inside the district services that previously would have cost much more for tuition at an out-of-county — or out-of-state — facility. Volz said out-of-state facilities can range from $25,000 to $50,000 for one student’s tuition in a year.

“The tuition costs can be unbelievably high,” Volz said.

The county will also choose specific settings for students with special needs that the district is not equipped to educate, and the district is responsible for those students’ tuition, Alphs said.

Because Albert Lea is a regional center, some more high-needs students from surrounding districts may enroll there. Albert Lea Area Schools is reimbursed by those districts for 90 percent of the cost to educate those students, Funk said.

“We lose money that way when there’s a cross-flow of students,” he said.

Add to that a funding formula “so complex it would just make your head spin,” she said. The state of Minnesota calculates special education aid three different ways, then offers the district the lowest of the three amounts.

Additionally, the state sets a cap on the aid it will offer to districts. Albert Lea has not hit that cap, Volz said, but it is hovering near it.

Another way the district attempts to combat some special education costs is the third-party billing funding stream, which allows the district to be reimbursed by the government, through Minnesota’s Medical Assistance insurance, for some services they provide.

This adds up to a lot of paperwork for the staff, Alps said. However, according to Volz, it also adds up to around $700,000 the district is receiving to help support special education and provide services. It is a drop in the bucket of an estimated $4.5 million funding shortage caused by low federal funding, Funk said.

“We are using that funding to help pay for positions, because you know our needs are so great and the funding is so poor with special education that we are having, using every avenue possible to provide the programs,” Volz said.

‘We need to be doing more’

Gov. Tim Walz’s proposed budget included $91 million set aside for special education to stop the growth of cross-subsidies across the state. This number remained unchanged in the revised budget he released March 22.

“I think that’s a very worthy endeavor, and I agree with it,” Bennett said. “I actually think we need to be doing more. You know, this is a huge burden on districts all around the state, including Albert Lea and the other school districts in our area, too, and my opinion is in years of surplus … the state needs to take care of things like the special education subsidy that are basically our responsibility right now because the federal government is not filling it in.”

She called efforts to stop the funding gap growth a “good start,” but said she would like to see the state put even more funding forward to chip away at the cross-subsidy for districts.

“I think we need to stop kicking the can down the road,” she said.

The cross-subsidy is a hot topic among the House Special Education Committee members, Bennett said. The only argument she said she has heard against further funding special education at the state level is that the state cannot afford to.

Funk, who spoke to the state Legislature at the end of February as a representative of districts in Greater Minnesota, said he appreciates the Legislature is trying to help. Still, he said, the state is not the root of the issue.

“Really, this is the federal government that’s dropping the ball on this,” he said.