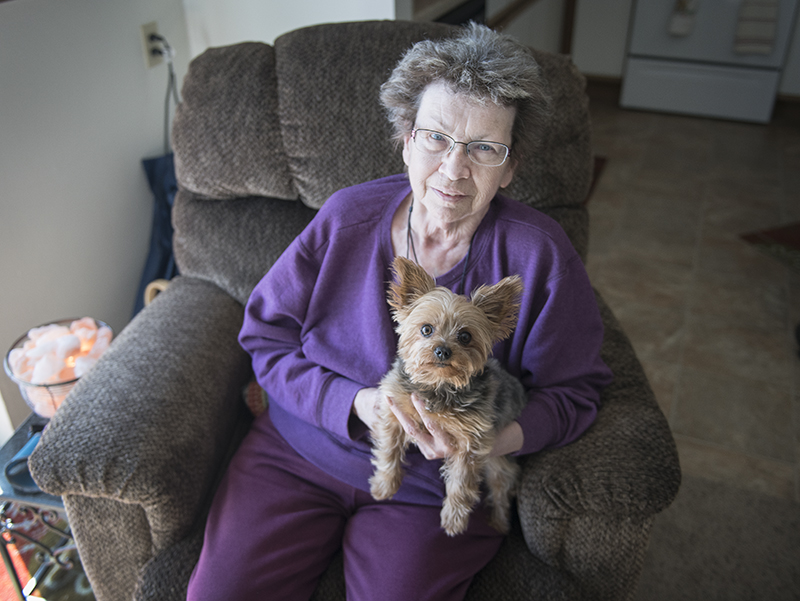 Albert Lea resident Jan Sanftner, pictured with her dog, had to be flown to Mankato via helicopter during a February blizzard when she was eventually diagnosed with pneumonia and sepsis. - Colleen Harrison/Albert Lea Tribune

Local patients who have needed to be taken from Albert Lea for medical services are expressing frustration that care was not available in Albert Lea.

During a blizzard early in the morning of Feb. 25, Albert Lea resident Jan Sanftner, later diagnosed with pneumonia and sepsis, was taken to the Albert Lea hospital after experiencing shortness of breath while shoveling snow.

“I could not get my air, and I somehow managed to call 911 and slowly give them my address,” she said.

Sanftner was taken to Mayo Clinic Health System in Albert Lea at about 4 a.m. and spent the following night in Albert Lea before being taken via helicopter to Mankato, as major portions of interstates 35 and 90 remained closed. She said snow fell on her during the trip.

“That was one miserable trip,” she said. “I guess I’m glad they did it.”

Sanftner noted she became stressed when she was told she needed to be taken to Mankato via helicopter.

“I think it’s very stressful when they say they are going to put you on a helicopter,” she said. “And you go, ‘oh, it must be worse than I thought.’ I just don’t see any reason why Albert Lea doesn’t have a hospital and doctors.”

Sanftner noted she only had a 50 percent chance of survival.

Sanftner, who was released March 6, said she was pleased with the care she received in Mankato.

“I have to say that the care I received in Mankato was excellent,” she said.

“When you’re in the kind of situation, some ill health of some kind, you just want to go someplace local that has the facilities, the doctors, the type of treatment that you would expect any place. And Albert Lea is big enough to have a hospital, population-wise and everything. That was one of the reasons I moved here.”

Sanftner said she has “never lived in a town where they didn’t have a hospital, and this is supposed to be one of the best systems worldwide. People fly in all the time to Rochester.”

Mayo Clinic Health System in Albert Lea and Austin Medical Director Sumit Bhagra said even without blizzard conditions, sepsis and pneumonia are severe conditions and need to be treated in the proper setting.

Chuck Foster, 96, an Albert Lea resident for 50 years, was hospitalized Feb. 15 after falling on a kitchen floor and suffering four large abrasions on his left arm. He was taken by ambulance to Austin because there were no beds available at the Albert Lea hospital.

“It would have been so much easier for my family to be near me, and I had people visiting me over there in Austin for the four days that I was over there,” he said.

He said his recovery process has been slow because he has experienced a sore shoulder and is dealing with the abrasions.

He remembered when similar services that hospitalized him in Austin were available in Albert Lea.

“We miss that hospital,” he said.

“It might not seem like a long ways to Austin, but it is when you are in the back of an ambulance.”

Foster’s wife, Carol, was on the local hospital board in 1974 during a $5 million successful fundraising effort for an addition to the Albert Lea hospital. Foster has regularly attended Save Our Healthcare meetings. He said a good argument has been made that Albert Lea can sustain its own hospital.

“Our city deserves the presence of an on-board community hospital, whether here in town, whether it’s run by Mayo or another organization that might be developed,” he said.

Ann Berry, 80, broke her ankle and fibia, fractured her left femur and sustained a large abrasion on her lower left leg Dec. 10 after she was struck by a car at the intersection of Bridge Avenue and Sheridan Street.

She was in the hospital for one week before being sent to Good Samaritan Society of Albert Lea for several months for rehabilitation. She returned home less than two weeks ago.

Berry said she was grateful to be cared for at the Albert Lea hospital, making it easier for local residents to visit her. She expressed concern the transition of most inpatient services to Austin will make that more difficult. She also said that while she was pleased with the care she received at the Albert Lea hospital, she is concerned the local convenience will not be available once the med/surg unit moves to Austin.

Bhagra said even after the unit moves, Albert Lea emergency medicine staff will treat patients when needed before they are transferred to Austin.

Regarding transportation concerns, he said SMART Transit shuttle services will be available to transfer people between Albert Lea and Austin campuses.

Bhagra noted more than 95 percent of care patients receive is in a clinic setting Mondays through Fridays, services that will still be available after the transition of most inpatient services from Albert Lea to Austin is complete.

The hospital system is offering Saturday clinics through March 23 for patients affected by recent bad weather.

To Berry, the hospital system’s need to remodel and rebuild at the Austin campus to accommodate the transition is disappointing, as she said the Albert Lea hospital has functioned well for years.