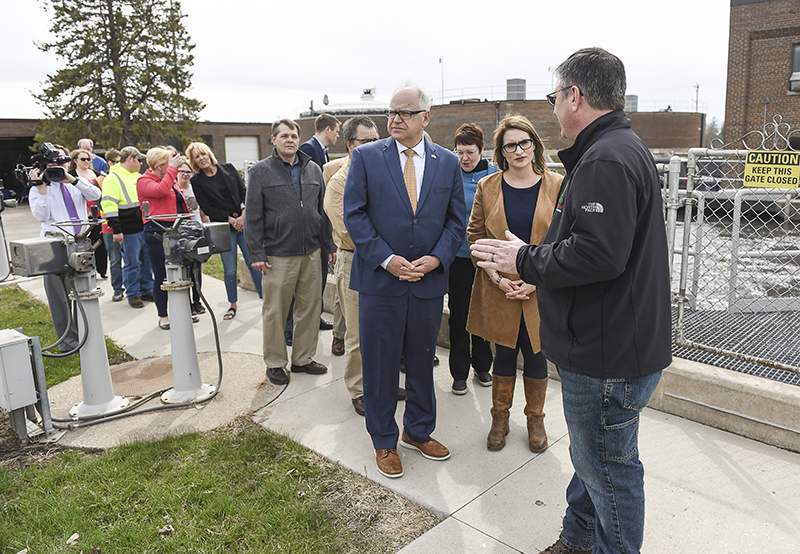 Chad Heard, superintendent of the Austin wastewater treatment center, right, talks to Gov. Tim Walz and Lt. Gov. Peggy Flanagan about the needs of the center in terms of upgrading. Local government aid would help with that project. - Eric Johnson/Albert Lea Tribune

AUSTIN — Gov. Tim Walz was back in Austin again Tuesday, this time to get a first-hand account of what local government aid means to communities like Austin and Albert Lea.

Walz took a quick tour of the wastewater treatment plant, along with Lt. Gov. Peggy Flanagan and House Speaker Rep. Melissa Hortman, and then sat down with city leaders from Austin and Albert Lea to hear about the challenges some cities face when it comes to LGA.

“To highlight local government aid and bonding is to provide public safety and necessities,” Walz said after the short tour. “Water treatment is a need-to-have.”

Walz is pushing for a return to 2002’s LGA numbers with an increase of about $30 million, part of the governor’s $49 billion budget proposal, which is about $3 billion more than the last two budgets.

For Austin, which relies on around $8.1 million in LGA funding, this increase could prove pivotal. The city is looking at funding to help bring the wastewater treatment plant up to Minnesota Pollution Control Agency code, which carries with it an estimated $73 million price tag, up from a previous estimate of $40 million.

“That’s a big chunk of money,” said City Administrator Craig Clark. “Whether it’s coming out of utility fees or property taxes, it all comes out of the same pocket.”

And that pocket belongs to Austin, which is why the LGA funding is so important.

“There’s a limit to the welding and duct tape you can do on a water treatment plant,” Walz said, referring to the decision many cities in Minnesota are having to make in regards to upgrading infrastructure. 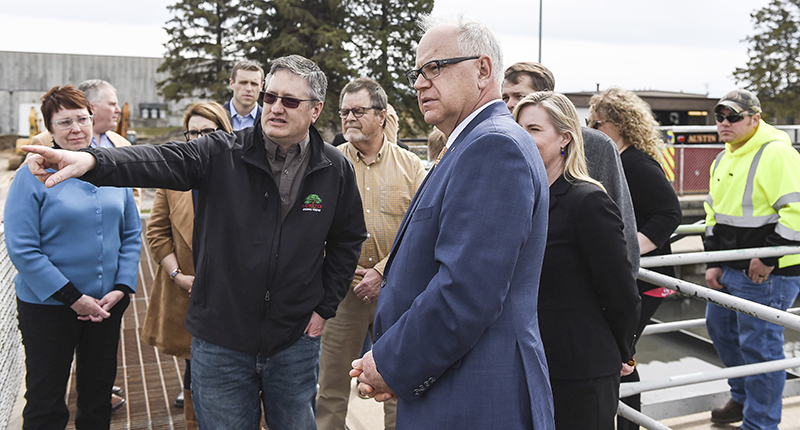 Albert Lea is in much the same bind and Mayor Vern Rasmussen Jr. said that some of its upgrades can’t wait any longer.

“Without LGA we would be a drastically different community,” Rasmussen said during a round-table discussion. “Our infrastructure needs are paramount. We can’t push this back anymore.”

Walz, along with Flanagan and Hortman, spoke to the needs of the state legislature continuing to support LGA.

In Flanagan’s view, it’s just something that needs to be done.

“LGA funding is really just common sense,” Flanagan said. “We want to be your partners.”

But to be on board is to go against voices in the Minnesota Legislature who are opposed to the increase to the budget proposal, primarily in the Republican-lead Senate.

“It’s important for a government to not only look into cost, but value,” Hortman added.

Mayor Tom Stiehm, however, pushed the importance of LGA by using Austin as an example.

“You drive around, you’ll see a vibrant, growing city and that’s because of local government aid,” Stiehm said.