The Women Veterans Initiative recognized Perry March 23 at the Minnesota Department of Veterans Affairs Conference for women veterans, hosted at the Maplewood Community Center. Minnesotans from around the state nominated service women for outstanding lifetime contributions to their communities, according to a press release. 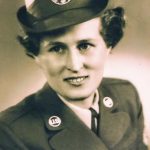 Perry is a retired military member who in 1944 entered the Army Air Corps during World War II. She also served during the Korean and Vietnam Wars, eventually serving over 20 years in the United States Air Force.

Ruth’s service took her from Germany, where she managed a base gymnasium to the United States Air Force Academy and she wrote a book that taught women service members what was expected of them as members of the Air Force. Perry served as unit first sergeant as well as a recruiter, where she was responsible for a three-state region. Perry retired in 1965.

Upon retirement, she became an employee with the Social Security Administration and served her nation for an additional 20 years before retiring once again.

Perry’s passion for volunteering turned to service organizations, and she served as the chaplain within her local American Legion Post 56 in addition to serving breakfast twice a month for many years. She is a lifetime member of the Veterans of Foreign Wars of the United States Post 447. Perry dedicated years of service to her sisters-in-arms as an officer of the Women Veterans of Minnesota and Women Veterans of Freeborn County, the release stated.

Perry’s volunteer service has not been limited to veterans organizations. She was named the Health Alliance Volunteer of the Year and the Good Samaritan Assisted Living Citizen of the year. She has given generously of her time and talents to other organizations, including St. John’s Lutheran Community and Naeve Hospital. 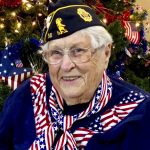 According to a press release, her generosity of spirit is reflected in her military service, civil service, decades of volunteer service as well as the myriad of honors and recognitions she has received through the years. Her devotion to country, veterans, family and friends has not waned. Although her eyesight has begun to fail, her handcrafted gifts are treasures to those who receive them.