Funeral services for Arlo Jaspersen will be at 10:30 a.m. Thursday at Trinity Lutheran Church in Albert Lea. The Rev. Eileen Woyen will officiate. Visitation will be from 5  to  7 p.m. at Bonnerup Funeral Service on Wednesday and again one hour prior to the service at the church. Interment will be in Carlston Cemetery in rural Alden. 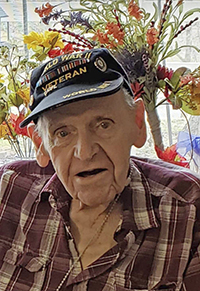 Arlo passed away peacefully Saturday, April 27, 2019, at Good Samaritan Society of Albert Lea at the age of 93.

Arlo L. Jaspersen was born Dec. 3, 1925, in Franklin County, Iowa, to Orrie and Ingeborg (Strandskov) Jaspersen. He grew up in Iowa, where he helped on the family farm.

Arlo enlisted in the United States Navy and served his country from 1943 to 1946. He did his basic training in Farragut, Idaho, and was then shipped to Darwin, Australia. One memory he recalled while in Australia was overhauling torpedoes to put them back into function. He was then shipped to different islands in the Pacific Ocean and Eniwetok Islands. It was there that testing for the atom bomb was taking place.

Arlo was married to Shirley (Dirksen). Sadly, she passed away at a young age.

On Jan. 1, 1969, he was united in marriage to June (Huddleston Manges) at Trinity Lutheran Church in Albert Lea. The couple was blessed with 50 years together.

Arlo was an active member of Trinity Lutheran Church, serving on the council, Stephen Ministry and was a Sunday school teacher. Arlo was also a member of the Elks Club, Veterans of Foreign Wars, American Legion and the Danish Brotherhood — and what a proud Dane he was! Fishing, gardening, reading and traveling the world were some of Arlo’s favorite activities. The family will miss his smile, all the jokes that he played on others and him saying, “You have to laugh to keep from crying.”

Memorials are preferred to the American Legion or Youth For Christ.