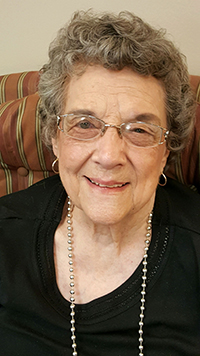 Memorial services will be at 11 a.m. Wednesday at Hollandale Reformed Church. The Rev. Neil Ooms will officiate. Visitation will be one hour prior to the service at the church. Interment will be in Hollandale Cemetery.

Allan B. Kleinpaste and Barbara Jean wed July 3, 1942. After the war, they owned and operated Hollandale Hardware. She was an active member of Hollandale Reformed Church.

Barbara Jean thoroughly enjoyed a good conversation. Always inquisitive, she was sincerely interested in the lives of others. What time was available after a kaffee klatsche or bridge club was spent reading books — primarily crime fiction.