Memorial services for Bernard “Bernie” M. Martin of Albert Lea will be at 2 p.m. Monday at St. Theodore Catholic Church in Albert Lea. The Rev. Kurt Farrell will officiate. Visitation will be from 11 a.m. to noon at Bonnerup Funeral Service with burial at 12:30 p.m. at St. Theodore Catholic Cemetery. Bernie died Friday, March 29, 2019, at St Marys Hospital in Rochester. He was 69. 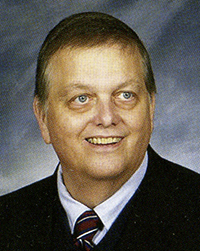 Bernard was born Feb. 7, 1950, in St Paul, the son of Henry and Georgiana (Brisson) Martin. He graduated from Albert Lea High School in 1968 and from Winona State University in business administration. He was a member of St. Theodore Catholic Church and had been a tax accountant for Duane Johnson Masonry. Bernie was a great cook and enjoyed cooking for his brothers. He enjoyed watching cooking shows, reading, fishing and working on his car. He was very close to his family.

Bernie is survived by his brothers Greg and Guy Martin of Albert Lea.