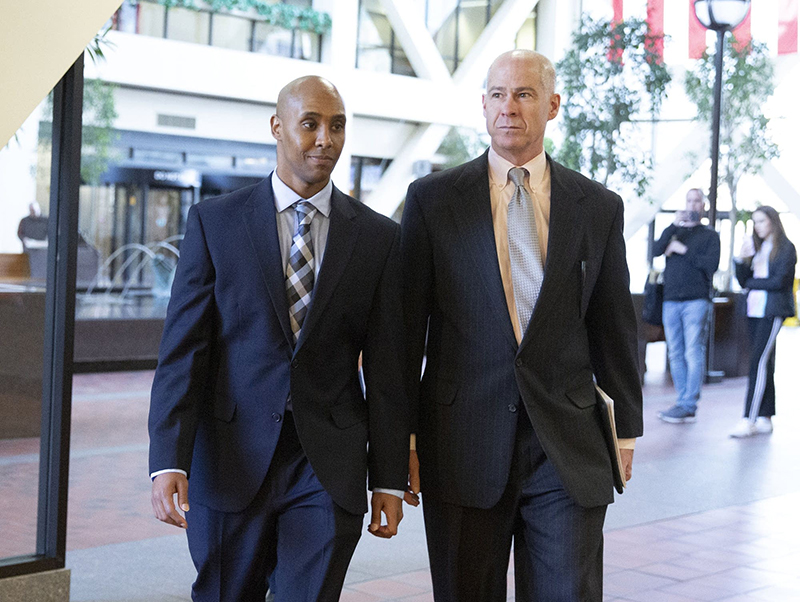 The only bystander on the scene at the time Minneapolis police officer Mohamed Noor shot 911 caller Justine Ruszczyk was a 16-year-old boy who had smoked marijuana and taken four shots of whiskey.

Now 17, the boy’s statements were challenged by both prosecutors and defense attorneys at Noor’s trial Wednesday morning. He admitted that his memory of the incident wasn’t clear, and that he had contradicted himself.

He said he was riding his bike over to a friend’s house that July 2017 night when he saw the squad vehicle at the end of an alley.

Then, he told the court, he heard a gunshot and the woman went to the ground. He said he immediately pulled out his phone and started recording video.

He said Noor’s partner, officer Matthew Harrity, went right to Ruszczyk after the shooting and Noor was pacing on the driveway. The short video shows the witness asking Noor what was happening. Noor tells him to back up, but that he can record.

The boy said he saw Noor and Harrity out of the squad, and a woman holding a phone. However, witnesses have testified throughout the trial about discovering that Noor was in the car when the shot was fired.

The boy also said Ruszczyk was wearing jeans and a tank top, although others have testified that she was wearing pajamas.

The witness admitted that his story has changed over time. He said he’s tried to block out the incident, but trusted his earlier statement. MPR News is not naming the boy because he is a minor.

Harrity, the other possible witness to the shooting has not yet testified.

The prosecution also called Patricia McIlvenna as a witness. She had called 911 three times to report a woman who looked like she may have dementia and need help.

McIlvenna reported that the final location of the woman was just down the block from Ruszczyk’s home. McIlvenna made the calls just two hours before Ruszczyk called 911 to report a woman being assaulted in her alley.

Noor and Harrity were also the officers sent to McIlvenna’s 911 call, but they didn’t find the woman.

McIlvenna said she saw the news about Ruszczyk’s killing the next morning and went to the scene to talk to investigators. “It seemed awfully coincidental,” she told the court. “Someone needed to line up the dots.”

McIlvenna said she talked to a Minnesota Bureau of Criminal Apprehension agent about the woman but that he “didn’t seem real interested.”

The BCA investigation was criticized by Hennepin County Attorney Mike Freeman before he filed charges against Noor. Prosecutors have signaled that how investigators handled the case will be an issue they’ll continue to explore in the trial.

Now a former officer, Noor is charged with second- and third-degree murder and second-degree manslaughter in the killing of Ruszczyk, also known as Justine Damond. She had called 911 to report what she thought was an assault happening behind her home. Noor was one of the responding officers.