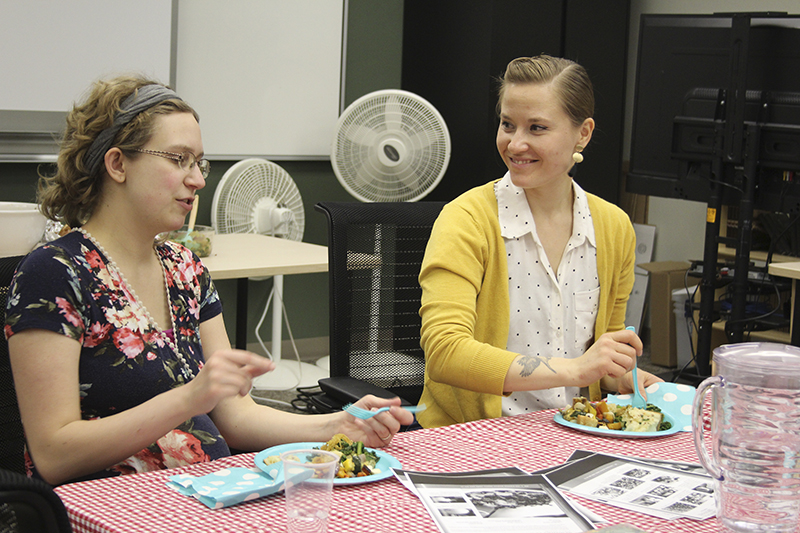 Nicole Mykkanen and Catherine Pfenning, who joined the club together, discuss the taste and process of cooking their dishes during the April club meeting. Sarah Kocher/Albert Lea Tribune

One Thursday a month at lunchtime, a group of library patrons sits down at a red-checked tablecloth with black-and-white photocopied recipes spread around them.

Between bites at April’s meeting, Albert Lea Public Library’s Cookbook Club discussed the layout and recipe choices of this month’s cookbook — “The Pioneer Woman Cooks: Come and Get It!” — compared to March, an Oprah selection.

“The Pioneer Woman, she doesn’t count calories — at least, not in her cookbook,” club member Catherine Pfenning said.

Pfenning said she is already at the library frequently, and the club plays into her interests.

“I like to cook, and I love to read cookbooks just for fun,” Pfenning said. 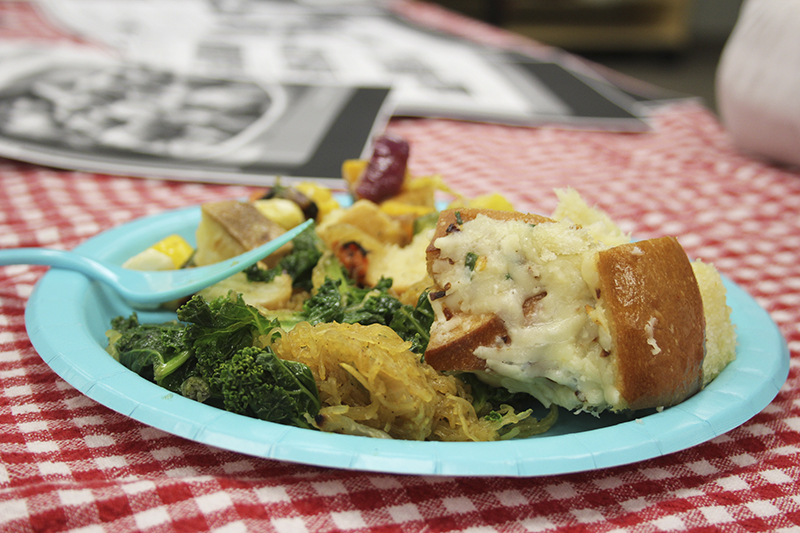 “I hope it’s as good as it looks,” she said before the club started testing each others’ dishes.

Albert Lea Public Library Assistant Library Director Annice Sevett picks each month’s cookbook. That cookbook is set aside at the library’s front desk, and those who wish to participate in the cookbook club stop at the desk and pick a recipe. Sevett keeps track of which ones are picked to avoid two of the same offering.

Then, the third Thursday of the month from noon to 1 p.m., club members bring their dish to lunch, serve it up and discuss the book’s layout, recipes, the author’s style and how it compares to past books.

At April’s meeting, Pfenning and fellow club member Nicole Mykkanen also shared any changes or discoveries they made during the process. Mykkanen, who made roasted vegetable panzanella, added a step: she stuck the cooked vegetables under the broiler for a short time to crisp them up.

Mykkanen joined the club at Pfenning’s suggestion that they join the club together. Mykkanen likes to cook, and for her three children, she stays on the lookout for healthy things they will also enjoy to eat, she said.

The club might be a chance to look at cookbooks she wouldn’t normally pick up, she said.

For Sevett, the club is an addition to adult programming, which she said the library has not had a lot of in the past.

“Cookbook clubs have gained popularity, especially in libraries, around the country,” Sevett said. “I think there’s a big movement these days for just like, people cooking, and getting back to cooking.”

Cookbooks also make up a big part of the library’s circulation, she said.

The library is “taking interests that the community have, because they’re checking out our cookbooks, and turning it into more of a community time,” Sevett said. “And so, not only are they making a dish and, you know, we’re having a little potluck, but they’re also experiencing the cookbook.”

And then, of course, there is the added perk.

Next month’s cookbook is “Food52 Genius Recipes.” The club is open to new members and will meet from noon to 1 p.m. May 17.