David Barry Jackson of Waukon, Iowa, died Monday, April 1, 2019, surrounded by his family and devoted caregivers at Veterans Memorial Hospital. He formerly resided in Albert Lea. He was 72. 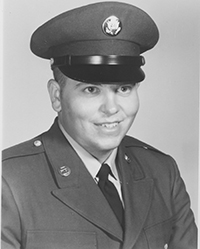 A memorial service will be at 2 p.m. May 13 at Minnesota State Veterans Cemetery in Preston. Martin Funeral Home in Waukon was in charge of  cremation.

Barry was born April 28, 1946, in Muskogee, Oklahoma. He was the son of David C. and Dollie (Boatman) Jackson of Eufaula, Oklahoma.

Growing up in Oklahoma, he enjoyed hunting, camping and riding bikes and motorcycles. In 1964 he graduated from Eufaula High School, where he excelled as a musician — playing trumpet with the marching and stage bands. He attended Connors State College at Warner, Oklahoma.

Barry joined the Oklahoma National Guard while still in high school and retired with the rank of captain. He embraced all aspects of military service.

His professional life was spent in retail lumber management and sales. Though not a member of any religious group, he was a very spiritual person and loved spending time outdoors.

The family requests donations be made to St. Jude Children’s Research Hospital.