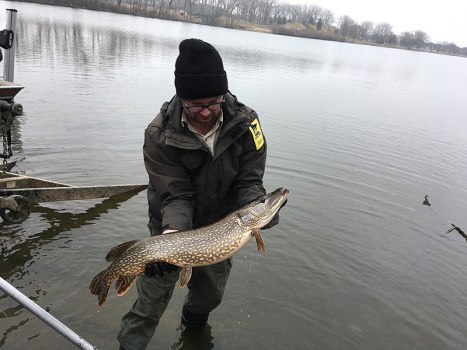 Brandon Eder of the Department of Natural Resources is shown holding a nice northern pike that has had its eggs harvested and is now being returned to the water. - Provided 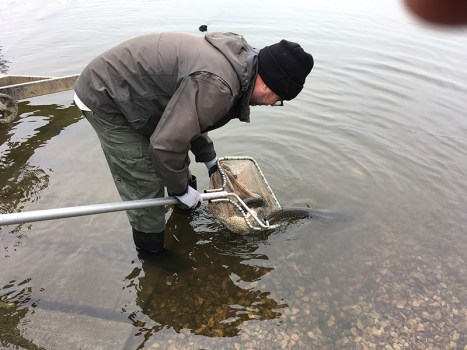 Eder releases some northern pike back into to the waters of Fountain Lake. -Provided 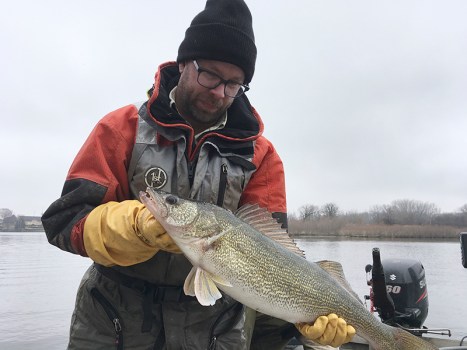 Brandon Eder holds a nice Fountain Lake walleye that was caught in one of the nets and was released back into the lake. - Provided

Last week I was asked by DNR Regional Information Officer, Dan Ruiter, if I would like to join a couple of workers from the DNR to observe the netting of Fountain Lake for northerns. The purpose of the netting was to harvest their eggs to use in stocking other lakes in the region.

On Friday morning I joined Brandon Eder, who is Assistant Area Supervisor of Waterville Area Fisheries, and Peter Muggli, who also works at the Waterville fishery. They had set their nets two days earlier and had checked them the previous day. On this day, they were returning the northern that they had taken the day before. Brandon said they don’t usually return the northern to the same lake, but with the Governor’s Opener being held here they would be returning the fish after harvesting the eggs.

The first order of business was to return the previous days catch to the lake. While Peter netted the fish out of the tank in the back of the truck, Brandon released them back into the water. There were some nice fish in the tank that will make for some great fishing for years to come.

After the fish were released, we launched the boat and headed to the first net. The first netting produced a few northern along with some crappie, catfish, bullheads and carp. The second netting had a couple of northern, a few bullheads, crappies, sunfish and one large walleye. That walleye was a very healthy 25-inch fish. All of the fish were released except for the northern which were transferred from the tank in the boat to a larger one in the truck.

Once the fish arrive at the Waterville Hatchery the eggs are “milked” from them and they are then put back into the tank until it’s time for them to be transported back to Fountain Lake.

Brandon said that Northern Pike fry usually hatch in 7-10 days, depending on water temps. Pike fry are stocked when they begin to swim which can be a few days after hatching. They try to stock Northern Pike fry in wetlands connected to the destination lake because that is where the adults would naturally spawn. This seems to work well for us and the fish eventually swim out of the wetland and into the lake. Pike fry have a sticky patch at the end of their snout that they use to attach to vegetation. They just eat whatever passes by until they are strong enough to chase down prey. Interesting little fish.

The Waterville hatchery supplies northern to nine southern Minnesota counties along with the Windom and Hutchinson areas.

Most of the walleye that are stocked come from the northern part of the state. Brandon said that some areas of the southern part of the state are stocked in test waters with walleye from both the north and the south; the southern strain being from Lake Sarah. The last walleye stocking of Fountain Lake was in 2017. For whatever reason, largemouth bass, although plentiful in Fountain, did not show up in any of the nets. I have found this is common when reading reports from other lakes throughout the state.

Any way that you look at it, Fountain Lake is a great fishery and a valuable resource for our area.

The time is getting closer for the Governor’s Fishing Opener and fishing hosts are still needed.

We are getting closer to our goal, but we are very much in need of “fishermen” to sign up as boat hosts. We haven’t quite reached the number of hosts needed to make this event a success. We really do need more hosts who will be willing to take media guests fishing.  I would like to encourage anyone who is a registered boat owner and has been considering being a boat host or knows someone that might be interested in the Governor’s Fishing Opener by being a boat host to sign up online. The easiest way to do that is by going to www.mngovernorsopener.com click on boat host and it will take you to the page. Just follow the instructions. You may also stop by the CVB office to pick up a registration form or call me at 507-383-2231 for more information. This is our chance to showcase this great community that we choose to live in and one that we are proud to call home.

Please remember to keep our troops in your thoughts and prayers during the year 2019. They are the reason we are able to enjoy all these wonderful freedoms we enjoy today.