Funeral services for Elvern H. Holland of rural Ellendale will be at 11 a.m. Wednesday at Hartland Evangelical Lutheran Church in Hartland. The Rev. Shawn Stafford will officiate. Visitation will be from 9 a.m. until the time of the service at the church. Interment will be in Hartland Cemetery. 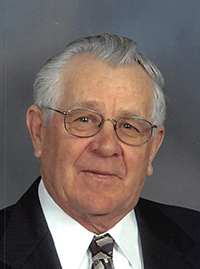 Elvern was born Nov. 17, 1932, in Freeborn County, the son of Hans and Lillie (Miller) Holland. He attended country school in Freeborn County and on July 20, 1957, was united in marriage to Jean Bartness in Hartland. Elvern farmed his whole life and enjoyed working the land and milking the cows. He was a very hard worker. Elvern was a member of Hartland Evangelical Lutheran Church and Ellendale Saddle Club. He enjoyed deer hunting, coon hunting, fishing the family pond, horses and especially working in his gravel pit. He loved to spend time with the grandkids, attending all their various events. Elvern could be found at the gas station spending time with his many friends and neighbors.

Elvern was preceded in death by his parents, many brothers-in-law and one sister- in-law.