A charge was dismissed Friday against an Oregon man who allegedly possessed 115 pounds of marijuana in a vehicle in November 2017 on Interstate 35 near Geneva. 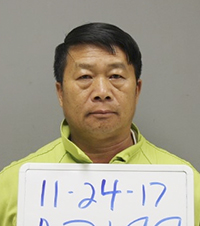 Freeborn County District Court Judge Ross Leuning in December found there was insufficient basis for the traffic stop by a Minnesota State Patrol trooper who ultimately uncovered the marijuana.

Chou Chang, 57, had been charged with first-degree marijuana possession.

Court documents state the trooper pulled Chang over after reportedly seeing a vehicle that appeared to have the right headlight go out and then come back on. The trooper alleged he pulled up alongside the vehicle, and the driver looked at him and then veered over the fog line.

The trooper then signaled the driver to stop, to which he complied.

Court documents state the trooper suspected Chang to be transporting marijuana after finding numerous air fresheners and excessive luggage for one person. A rear-seat area was covered by a tarp and a blanket.

A search of the vehicle reportedly revealed 115 plastic, heat-sealed bags, each containing about 1 pound of marijuana.

Chang argued in court that the initial stop of his vehicle was unreasonable and not legally justified — and that the marijuana seized was obtained in an illegal search.

After reviewing video from the trooper’s squad car, Leuning said he did not show a diminished light or any swerving over the fog line and that there was insufficient evidence to conclude the headlight was malfunctioning.

“After reviewing the recording from the officer’s vehicle, the court finds no evidence that the defendant veered,” Leuning wrote.

Throughout the duration of the video — which lasted more than 31 minutes — the right headlight never dimmed nor went out, Leuning said. The trooper also tapped on the headlight to detect a short wire, but the headlight did not go out.

Leuning stated the trooper’s testimony was inconclusive and there was no corroborating evidence to affirm the basis of the traffic stop. Because of this finding, the judge ordered the evidence resulting from the traffic stop to be suppressed.

“Without the marijuana, we were left with no ability to prove the case,” Freeborn County Attorney David Walker said.